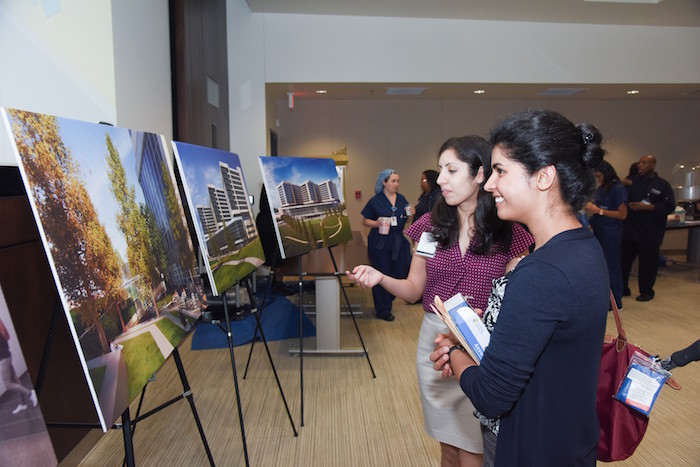 Given the impressive success of William P. Clements Jr. University Hospital, when staff members were going through orientation activities for the soon-to-open new hospital in October 2014, rain proved to be a good omen.

Likewise, when UT Southwestern celebrated the groundbreaking for the hospital’s third tower on Sept. 29 – many years ahead of schedule – the rain that day was considered a harbinger of good fortune.

The new 12-story tower, which is slated to be complete in 2020, will serve as the clinical home for the Peter O’Donnell Jr. Brain Institute, consolidate acute inpatient care services currently provided at Zale Lipshy University Hospital, and add operating rooms, interventional suites, a newly expanded Emergency Department, and two new parking facilities. The project will enhance both the quality of care and the efficiency of delivery, reducing expenses while accommodating growth.

In a pair of events on Sept. 29, University Hospital employees, leaders, and key stakeholders celebrated the start of construction on the $480 million expansion. In addition to a formal groundbreaking ceremony, a daylong “thank-you” event for University Hospitals employees featured a wildly popular photo booth, festive snacks, and feel-good pop music.

At the morning groundbreaking ceremony, UT Southwestern President Dr. Daniel K. Podolsky told the crowd he was “delighted, privileged, and humbled that we are here today to launch the next era at UT Southwestern, less than three years after Clements opened in December 2014.”

“We got here through the hard work, commitment, and creativity of everybody in this room and many others in the UT Southwestern community,” Dr. Podolsky said. “When we were planning Clements University Hospital, ‘patient-centric’ was the mantra. We pride ourselves on the quality of care we offer and on our commitment to the very best patient experience possible.”

That reputation for quality was echoed by patient advocate Michael Kahn, who spoke of his late mother, Beth Kahn, who battled brain cancer, as well as his newborn son, Charles Kahn, who arrived 11 weeks early at Clements.

“During our 32-month journey, my mom walked both of her children down the aisle, and she held her first grandchild in her arms,” he said. “Without UT Southwestern, I’m not sure what would have been possible. … The doctors and researchers were brilliant, but the bedside manner always impressed me most.”

Transitioning to the present-day care for his son, Mr. Kahn said: “Because of UT Southwestern, my wife Alex and I are hopeful Charlie will come home in a few weeks. He’ll meet his brother, William, for the first time, and our family will be complete.” (Update: Charlie was discharged on Oct. 20, and is now home with his family.)

Dr. John Warner, Vice President and CEO of UT Southwestern University Hospitals, said the staff has a lot to be proud of over the three years that Clements has been open.

“We’ve won national awards in quality, and we have been recognized for being among the top 5 percent of hospitals in patient experience, and I’m very proud of all of that. But I think I’m most proud of the trust of our community, and the fact that our volume and the number of people seeking care from us has grown so exponentially. So that’s why we’re here today – a lot sooner than I thought we would be – but that’s a great thing and something we should celebrate.”

A UT Southwestern employee since 1997, Nadia Pratt, B.S.N., RN, recalled the day in October 2014 when employees were offered a tour of Clements before it opened to the public.

“We were like kids in a candy store,” said Ms. Pratt, Assistant Nurse Manager of the Surgical Intensive Care Unit. “We were running from one part of the unit to the other, yelling: ‘Look at this! What does this do?’ ‘I don’t know, but it’s awesome!’ It was fantastic, and still is.”

She added: “The technology is leading-edge – from the state-of-the-art OR suites to the smallest details in the patient room, such as extra equipment for procedures, remote-control blinds, and TVs that not only allow for entertainment, but for different applications like video-conferencing and telecommunication.”

Just a few weeks after the hospital opened, however, Ms. Pratt received life-changing news: Her mother was diagnosed with advanced cancer. She was immediately admitted to a patient room on the north side of the hospital, and Ms. Pratt was unexpectedly facing one of her life’s darkest moments.

“I remember not wanting my mom to see how upset I was, so I was looking out the windows,” Ms. Pratt recalled. “The windows are enormous, and have this panoramic view of the city – especially from the north side. The sun was setting on the skyline, and it just shimmered.

“That beauty, from that view in the hospital, gave me this little moment of peace. And in that moment I was able to find some strength for what lay ahead. And I am sure that I am not the only family member who has had that experience,” she said.

“Whether it’s the view from the room, the gardens, the fountains, the art – whatever it is – it may seem small. But it’s not.”

Dr. Warner holds the Jim and Norma Smith Distinguished Chair for Interventional Cardiology, and the Nancy and Jeremy Halbreich, Susan and Theodore Strauss Professorship in Cardiology.