The story of UT Southwestern Medical Center is one of commitment to excellence, dedication to discovery, and service to the community. It's also a story of phenomenal growth, fueled by exceptional people with an extraordinary vision: to establish an academic medical center second to none.

Since its formation in 1943, Southwestern Medical School has grown from a small wartime medical college into UT Southwestern Medical Center, a multifaceted academic institution nationally recognized for its excellence in educating physicians, biomedical scientists, and health care personnel. 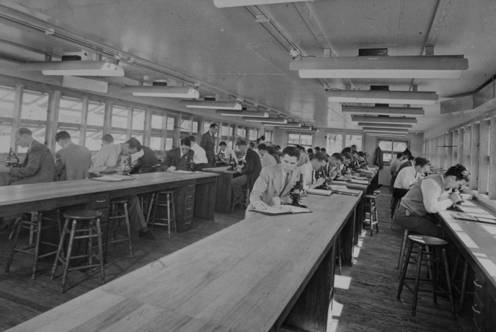 Southwestern Medical College students bent over microscopes with empty tables in foreground (circa 1944).

Under the leadership of the late Edward H. Cary, M.D., and Karl Hoblitzelle, a group of prominent Dallas citizens organized Southwestern Medical Foundation in 1939 to promote medical education and research in Dallas and the region. When Baylor University elected to move its school of medicine from Dallas to Houston in 1943, the Foundation formally established Southwestern Medical College as the 68th medical school in the United States.

In November 1972 the name and scope of the Medical School were changed with its reorganization into The University of Texas Health Science Center at Dallas. In approving the concept of a health science center, the UT System Board of Regents provided for the continued growth of coordinated but separate medical, graduate, and undergraduate components, interacting creatively on the problems of human health and well-being.

In 1986 the Howard Hughes Medical Institute (HHMI) opened a research facility on the campus. Concentrating on molecular biology, it has brought outstanding scientists to head laboratories in their specialties. These investigators also hold faculty positions in the basic science departments of the Medical and Graduate schools.

In October 2009 the UT System Board of Regents and the Board of Trustees of the Seton Family of Hospitals approved the creation of a new partnership with UT Southwestern for medical education and research. The partnership significantly increased the number of residents (doctors in training) practicing at Seton facilities. The agreement also bolstered medical research projects conducted by the Seton Family of Hospitals, and allowed for the expansion of collaborative research efforts with UT Southwestern and The University of Texas at Austin.

The partnership led the UT System Board of Regents to in February 2011 approve changing the institution’s name to The University of Texas Southwestern Medical Center, stripping “at Dallas” from the name. The change was intended to reflect the growing breadth of the school, which includes clinical facilities in Frisco, Las Colinas, Lewisville, Park Cities, Plano, and Richardson, along with the Harold C. Simmons Comprehensive Cancer Center and the new Monty and Tex Moncrief Medical Center in Fort Worth.

UT Southwestern is located on Harry Hines Boulevard, a 10-minute drive northwest of downtown Dallas. Since the late 1960s the university has grown to include 15.3 million square feet of space with another 1.4 million square feet under construction. Affiliated hospitals adjacent to the campus are Children's Health℠ Children's Medical Center Dallas and Parkland Hospital.

And as international medical and scientific needs grow, UT Southwestern will keep working to remain at the pinnacle of medical institutions worldwide.

Learn how our scientific discoveries make a difference.