An estimated 1.7 million traumatic brain injuries (TBI) occur annually in the United States with about 75 percent of these categorized as mild TBI (mTBI) or concussion. mTBI has been implicated in nearly 75 percent of brain injuries reported in U.S. military operations from 2000-2012, and sports related concussions have increased interest in repetitive mTBI research over the past few years because of a high correlation with repeated concussions linked to the development of chronic traumatic encephalopathy (CTE) which can only be diagnosed postmortem. While initial damage in mTBI may be minimal (undetected by conventional MRI), the chronic neurodegenerative effects can persist for weeks or months post-injury and lead to significant cognitive, sensory, and psychiatric dysfunctions. TBI has been associated with a variety of electrophysiologic changes, due to missing or interrupted brain circuits and alterations to surviving structures. The electroencephalogram (EEG), evoked potentials (EPs), and event-related potentials (ERPs) are noninvasive procedures that can contribute to the diagnosis, prognosis, and rehabilitative assessments of TBI patients. While these methods are commonly used to assess patients with TBI, there exists much controversy with quantitative methods in mild traumatic brain injury and new more sophisticated analytical techniques are necessary to improve the reliability and specificity of EEG analysis in mTBI.

We will use a rodent model of repeated mild traumatic brain injury to assess the utility of nonlinear time series analysis of EEG data, ERP signal content and then correlate with histological markers for neuronal and glial cell changes over time.

This study could provide the foundation for using advanced signal processing techniques of EEG and ERP data as potential biomarkers for assessing the extent of brain trauma by correlating with histological markers which may contribute to the diagnosis, prognosis and rehabilitative assessment of TBI patients.

One of the leading causes of disability in Traumatic Brain Injury (TBI) is cognitive dysfunction. Currently there are few pharmaceutical or nonpharmaceutical treatment options available. The pharmaceutical options are primarily stimulant-like medications or dopamine agonists that target midline dopaminergic cognitive systems and general cognitive dysfunction. An emerging line of treatment for cognitive dysfunction is electrotherapy (e.g., rTMS, tDCS, tACS.) Our team has extensive experience with repetitive Transcranial Magnetic Stimulation (rTMS)/transcranial Direct Cortical Stimulation (tDCS) as treatments for neuropsychiatric disorders and has recently piloted the technique of High Definition (HD) tDCS, which uses an electrode cap with smaller electrodes that allows for more targeted electrical stimulation from one electrode to be transmitted to multiple other electrodes, thus focusing electrical stimulation on specific brain regions. There are several proposed mechanisms, with one being that tDCS leads to modulating the neuronal resting membrane potentials via sodium and calcium dependent channels (Liebtanz et al., 2002). The technique is also proposed to increase the neuronal firing rate leading to changes in long-term potentiation and depression (de Aguiar et al., 2015). These purportedly lead to long-term enhancement of signal transmission between neurons that can strengthen neuronal connections. While the stimulation is site-specific, it is proposed that the effects extend via the connections from the increased neuronal firing at the site to strengthen weak connections within a neural circuit.

After identifying TBI patients with word retrieval deficits using standard neuropsychological measures, we plan to recruit 30 subjects to address the following aims: Aim 1. Assess baseline electrophysiological (ERP and time-frequency) markers of memory retrieval. We have previously studied and characterized some of the neurophysiological properties of the pre-SMAcaudate-thalamic-cortical circuit that supports the semantic processes essential to retrieval (Hart et al., 2013). Aim 2. Administer 10 sessions of either 1 milliamp high definition tDCS or sham to the pre-SMA region. Aim 3. Repeat baseline neuropsychological and EEG measures of memory retrieval.

By using HD tDCS we can entrain this retrieval circuit by targeting the pre-SMA in order to improve memory retrieval in impaired TBI patients, using behavioral and electrophysiological markers to assess outcomes.

1. At the conclusion of this 12-month study, the development of HD tDCS as a noninvasive, nonpharmacological treatment for cognitive dysfunction in TBI will provide a novel, targeted therapeutic intervention with few side effects or drug interactions, and could potentially be added to other medical treatment regimens. 2. We have targeted a specific and significant cognitive deficit in TBI patients that is associated with a defined neural circuit and objective EEG markers to assess outcomes. The study will further inform the model of the neural circuit and provide further validation of EEG markers of impairments and recovery in TBI patients. 3. If successful, this new treatment approach (electrical stimulation) can be readily applied to other brain regions for treatment of various cognitive impairments in patients with TBI. 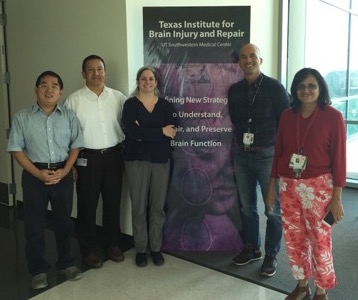 The PI’s will also be collaborating with Ann Stowe, Ph.D., to study the egress of white blood cells into the brain using flow cytometry methods. This will help to analyze the various lymphocyte populations in the blood and CSF. In addition, these cells will be tested later for auto reactivity to different brain myelin and neuronal antigens.

To understand cerebral autoregulation disturbances at the micro and macro circulation level and how these disturbances influence the neuro-inflammation in pediatric TBI.

This study could provide the basis for management of intracranial hypertension and optimizing cerebral perfusion pressure at the bedside in pediatric TBI.

The role of a novel nuclease PAAN1 in traumatic brain injury

To understand the molecular mechanisms of PARP-1-depenent neuronal cell death following brain injury, we recently performed two sequential unbiased high throughput screens, identified a key cell death effector PAAN, and have characterized this protein as a novel nuclease. In this project, we will study the direct functions of PAAN in neuronal cell death in the controlled cortical impact (CCI) model for traumatic brain injury using PAAN knockout mice. Further we will determine the role of PAAN nuclease activity in traumatic brain injury by intracerebroventricular (ICV) injection of a nuclease activity deficient PAAN into PAAN knockout mice. This study may provide the direct evidence that PAAN is the long-sought nuclease required for chromatinolysis and neuronal death in acute brain injury.

This study may promisingly discover a new druggable target for the treatment of traumatic brain injury.

Aerobic exercise as a treatment for traumatic brain injury 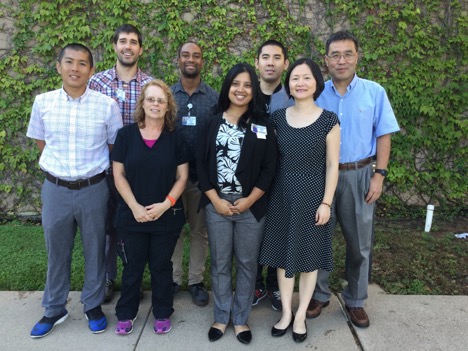 Traumatic brain injury (TBI) related mental and physical health such as memory and executive dysfunction, depression, anxiety, and fatigue affect survivor’s daily living and impact quality of life (QOL). In addition, TBI exacerbates age-related cognitive decline and is an important risk factor for Alzheimer’s disease. Despite decades of research work, no pharmacological approaches have been demonstrated to be effective for improving brain recovery after TBI. Aerobic exercise has been used as a non-pharmacological approach to prevent and treat depression and improve cognitive function and emotional health in other neurological conditions. However, potential benefits of exercise on brain health have not been sufficiently capitalized in TBI patients.

Conducting exercise trials with an ultimate goal to improve physical and mental wellbeing in TBI survivors can be challenging because of the presence of both physical and mental barriers which must be overcome to make exercise and adherence to exercise feasible in these patients. The high prevalence of physical inactivity (or deconditioning) may contribute significantly to the diminished quality of life in TBI survivors. Therefore, identification of barriers and development of effective and personalized exercise training programs are likely to be the key to promote physical activity in TBI patients. Moreover, a paradigm shift to focus on patient-reported outcome (PRO) measures is needed for clinical studies in TBI – a transformative change in clinical research for prevention and treatment of chronic diseases.

The overall goal of this pilot study is to explore the feasibility of implementation of a novel personalized aerobic exercise training program to improve patient-reported mental and physical health and quality of life in TBI patients. Furthermore, state-of-the-art neuroimaging techniques will be used to examine neuroplastic effects of aerobic exercise on brain structure and function.

This study may provide a better understanding of the feasibility of conducting aerobic exercise training in TBI patients and whether exercise improves health-related quality of life after brain injury. In addition, preliminary data of effects of aerobic exercise on brain structure and function will be obtained in this population.