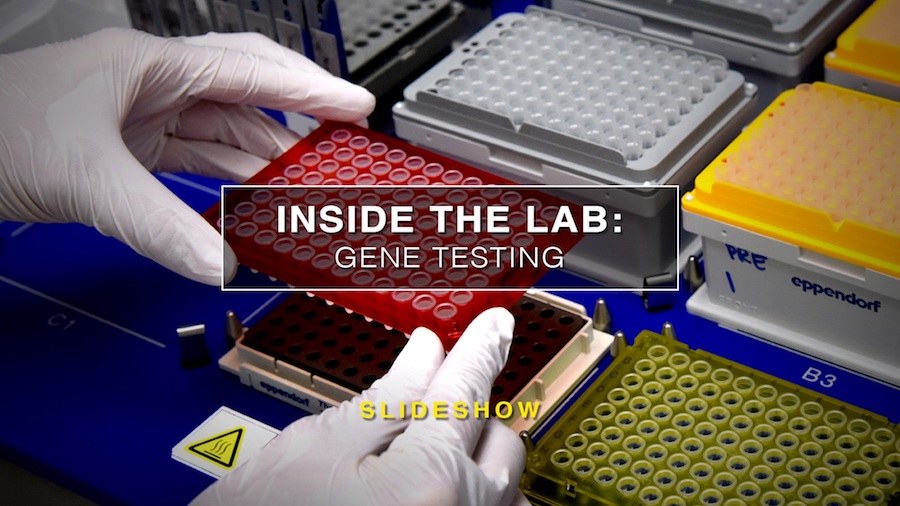 Gene tests are playing an increasingly integral role in how patients are diagnosed and treated. In this photo essay, experts at UT Southwestern and Children's Health lead us through the basic steps of how a patient’s DNA sample is analyzed in the laboratory to determine which genetic abnormalities are causing their disease. 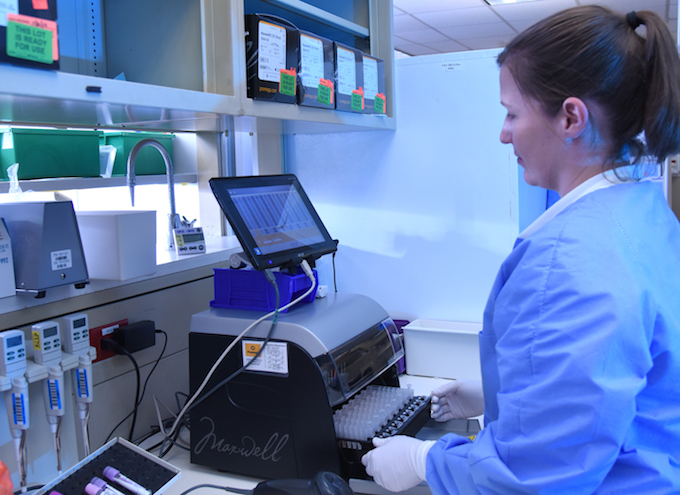 After a physician recommends a patient receive genetic testing, a sample is taken and sent to a lab where the latest technology in gene analysis is utilized. The results often help doctors pinpoint the genetic cause of a medical condition and prescribe a more effective treatment. 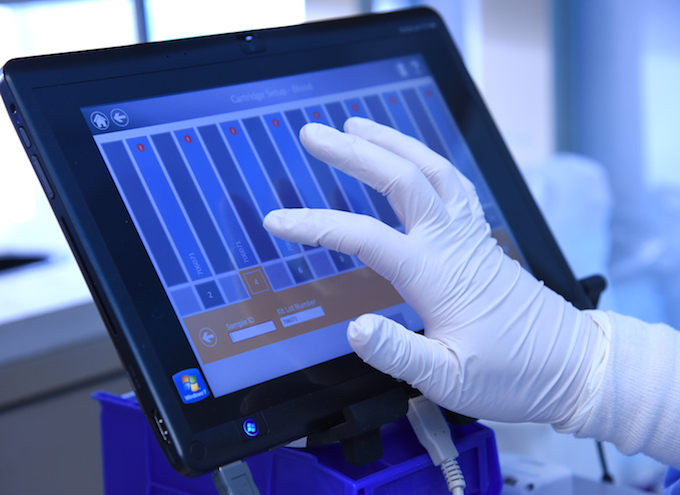 The first step in the lab is extracting DNA from the sample. Blood or tissue samples are used for the most detailed DNA analysis. 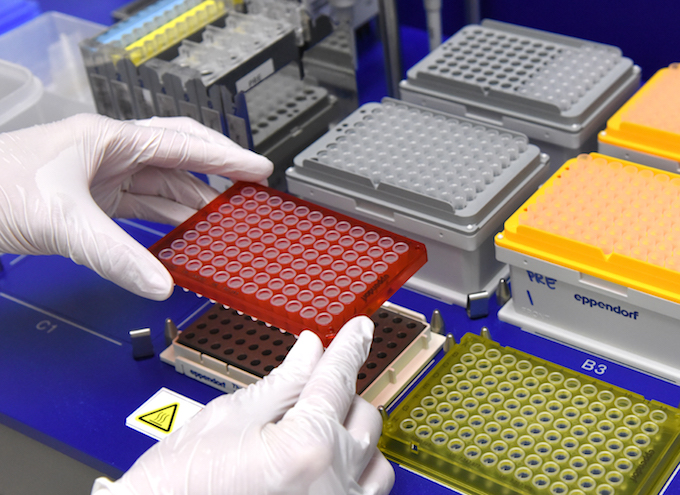 The DNA is placed in vials to enable more samples to be analyzed simultaneously. 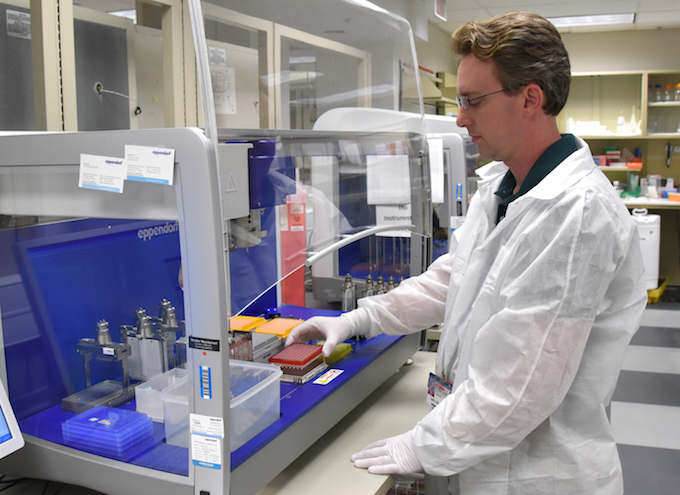 The vials are placed on a robotic platform for a “DNA library preparation” – a process in which samples are prepared for genomic sequencing. Genomic sequencing of DNA helps scientists detect abnormalities in the patient’s genetic code that may be causing disease. 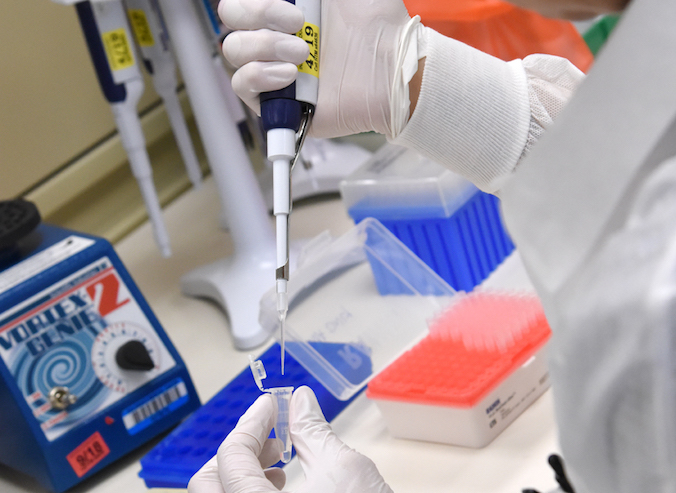 Each sample is diluted to reach a concentration level best suited for sequencing. 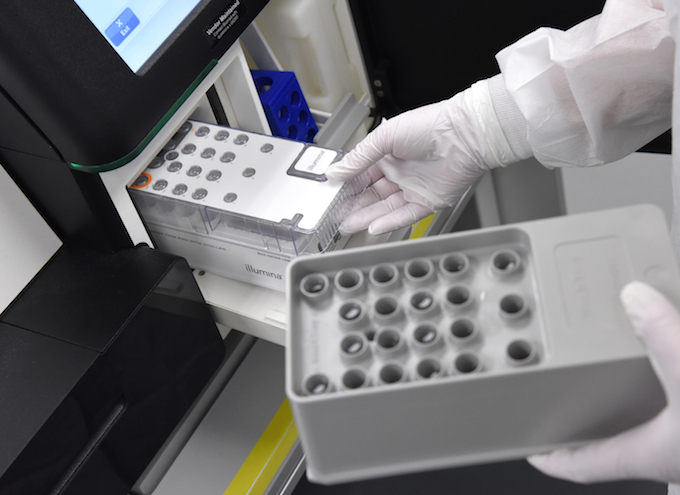 The DNA is loaded into a data analyzer that will utilize next-generation sequencing, a genomic testing process that analyzes hundreds of genes simultaneously. 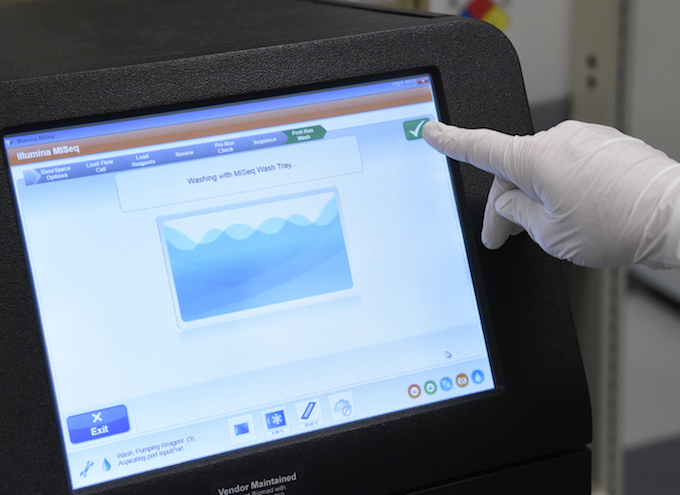 Next-generation sequencing allows scientists to sequence larger numbers of genes and has revolutionized the field of genomics over the past decade. 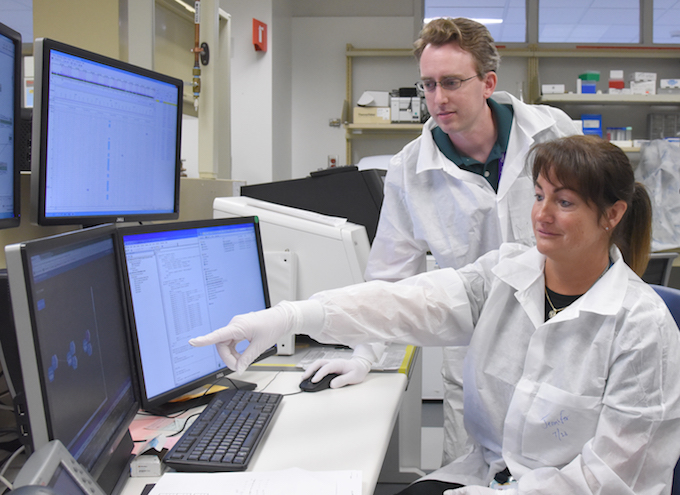 Because data from the sequencing typically include hundreds of genetic variants for even healthy people, experts must filter the results to identify only the very rare variants or those believed to cause disease. One widely used database contains about 90,000 variants linked to disease. 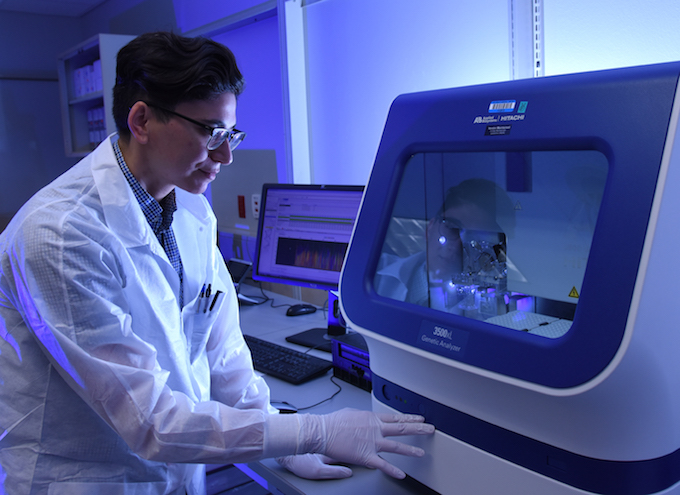 If a disease-causing variant is identified, the lab will run a Sanger single-gene sequencing test to verify the result of the next-generation sequencing. 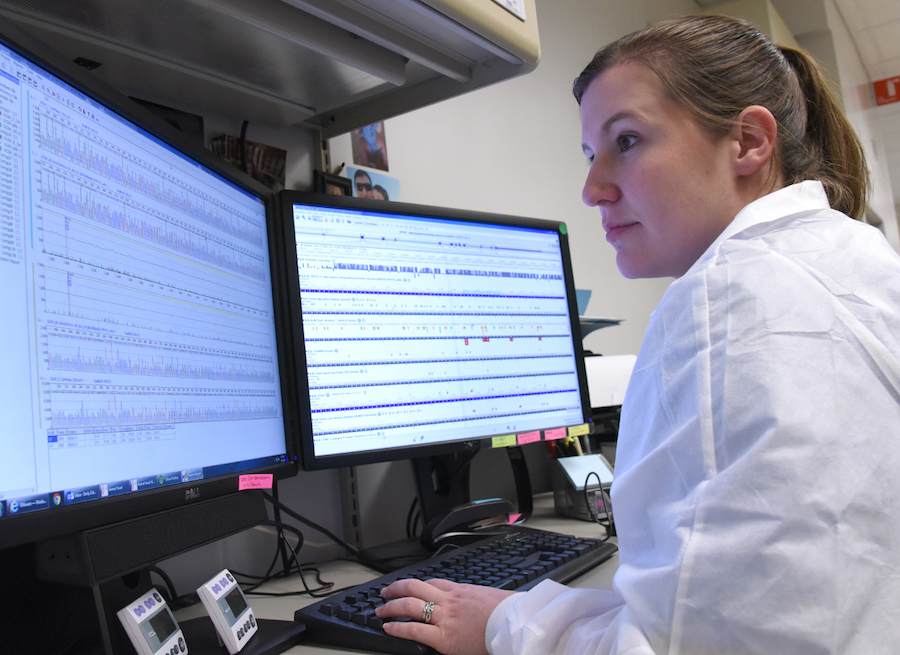 A medical technologist analyzes results from the Sanger sequencing. If the variant is confirmed, the lab will include it in a report for final review. 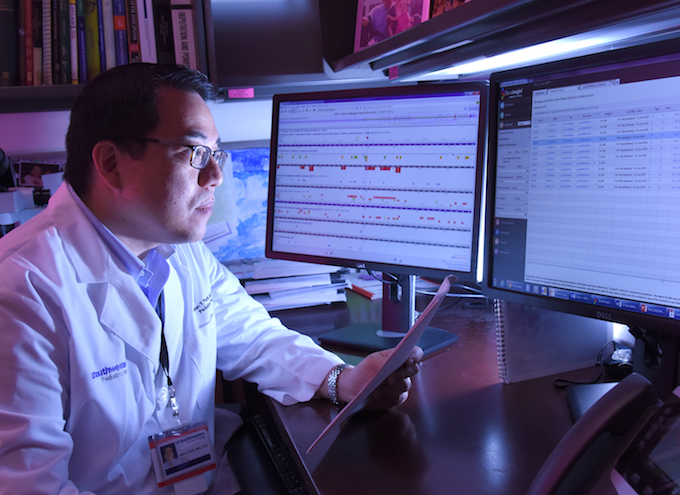 The lab’s medical director reviews and interprets the results of the gene test, utilizing databases that have cataloged hundreds of thousands of genetic variants. The director will give final diagnostic interpretation before the test results are given to the patient’s provider. Most genomic tests take two to four weeks to complete.

DALLAS – Nov. 5, 2018 – Lori Fullen recalls waking to screams from her little boy’s room. She remembers rushing in and seeing the terror in his eyes, wondering if he was having recurring nightmares.

She later realized the severity of the situation when her 7-year-old started shaking uncontrollably during an afternoon nap on the couch.

“It was heartbreaking to see him suffer and there’s nothing I could do,” said Mrs. Fullen, her voice cracking with emotion.

Doctors diagnosed Lorenzo with nocturnal epilepsy and prescribed medications, but the treatment only slightly reduced the frequency of his seizures. He was up to eight pills a day by age 13 when UT Southwestern experts conducted a genetic test that yielded a life-changing discovery: The boy’s epilepsy stemmed from the nicotine receptors in the brain – targets that could be controlled by nicotine patches. 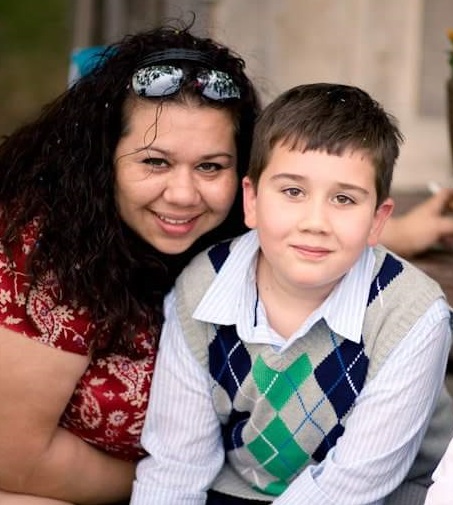 “Science is an incredible thing,” Mrs. Fullen said. “A genetic test changed Lorenzo’s life, and it’s exciting how quickly we’re learning about other genes that cause all kinds of diseases.”

A new study from UT Southwestern quantifies for the first time how quickly these rapid advancements in genomics may benefit patients. Research published in JAMA Pediatrics includes a five-year review of more than 300 epilepsy cases that showed nearly a third of children had a change in diagnosis based on new data.

Based on these data, scientists are calling for parents to review gene tests done in children with epilepsy at least every two years to ensure their diagnoses and treatments are based on the latest discoveries. This finding is significant because the leading genome societies have suggested periodic checks but have not recommended how frequently these should be made. 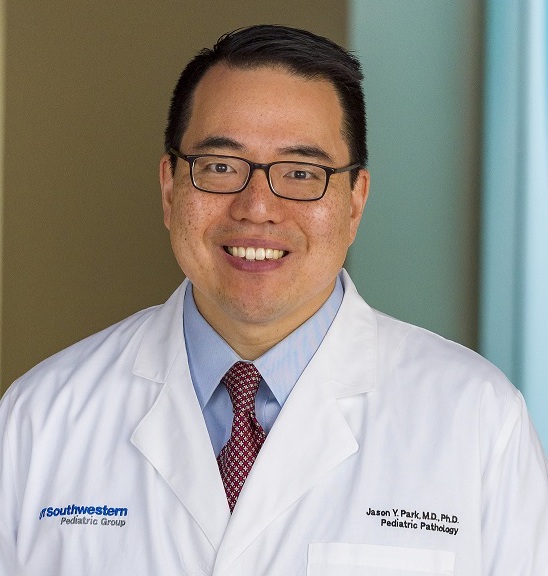 “This will start a national conversation for a number of diseases.”

“This will start a national conversation for a number of diseases,” said Dr. Jason Park, the study’s senior author and a member of UT Southwestern’s Eugene McDermott Center for Human Growth and Development. “Many of these test results come back inconclusive; we identify an unusual genetic change but we don’t know what it means. That unknown status often changes within a few years, allowing these patients to be helped if the providers and families check the new data.”

Much remains unknown about the human genome. One widely used database contains about 175,000 “variants of uncertain significance” – approximately double the number of genetic variants believed to cause disease.

Still, the new research shows how quickly scientists are piecing the puzzle together. The study found that 31 percent of the patients received a diagnosis based on a new understanding of their genetic variant within the five-year window. In patients who received a genetic test result as recently as two years prior, researchers still found 25 percent had a disease-causing variant reclassified. 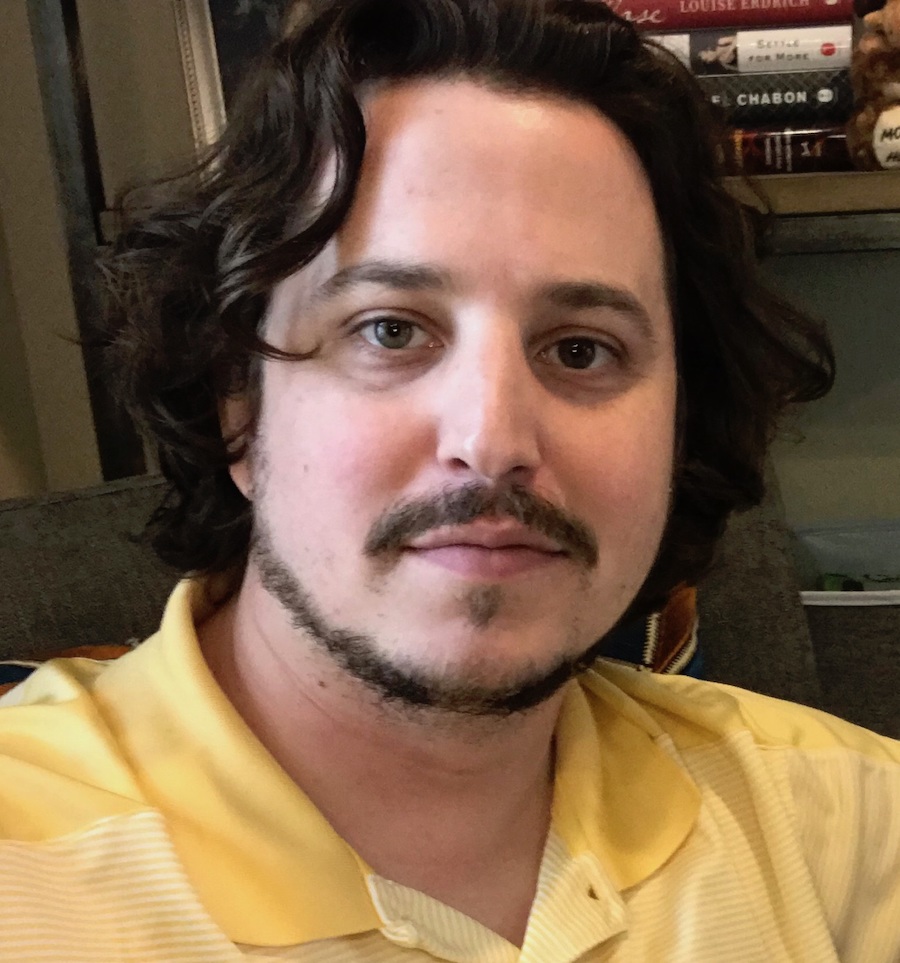 The findings expand the scope of similar UT Southwestern research published in JAMA in September that focused on hereditary cancers. Both studies call for further research to determine whether test reviews for other diseases and conditions have a similar limited shelf life.

“I was surprised how much change we saw,” said Dr. Drew Thodeson, a child neurologist and epilepsy expert at UT Southwestern’s Peter O’Donnell Jr. Brain Institute. “It’s a testament to how quickly genetics is evolving and how much we are learning with new laboratory techniques and with more people getting their genes tested.”

Dr. Thodeson recalls one of his patients who was initially placed on an ineffective medication then was prescribed a new one after genetic testing.

“If we would have had that information before, then the patient never would have been given that initial prescription,” Dr. Thodeson said. “It’s up to both families and doctors to have test results periodically reviewed to make sure the best care is being given. Our knowledge of the human genome is growing fast.” 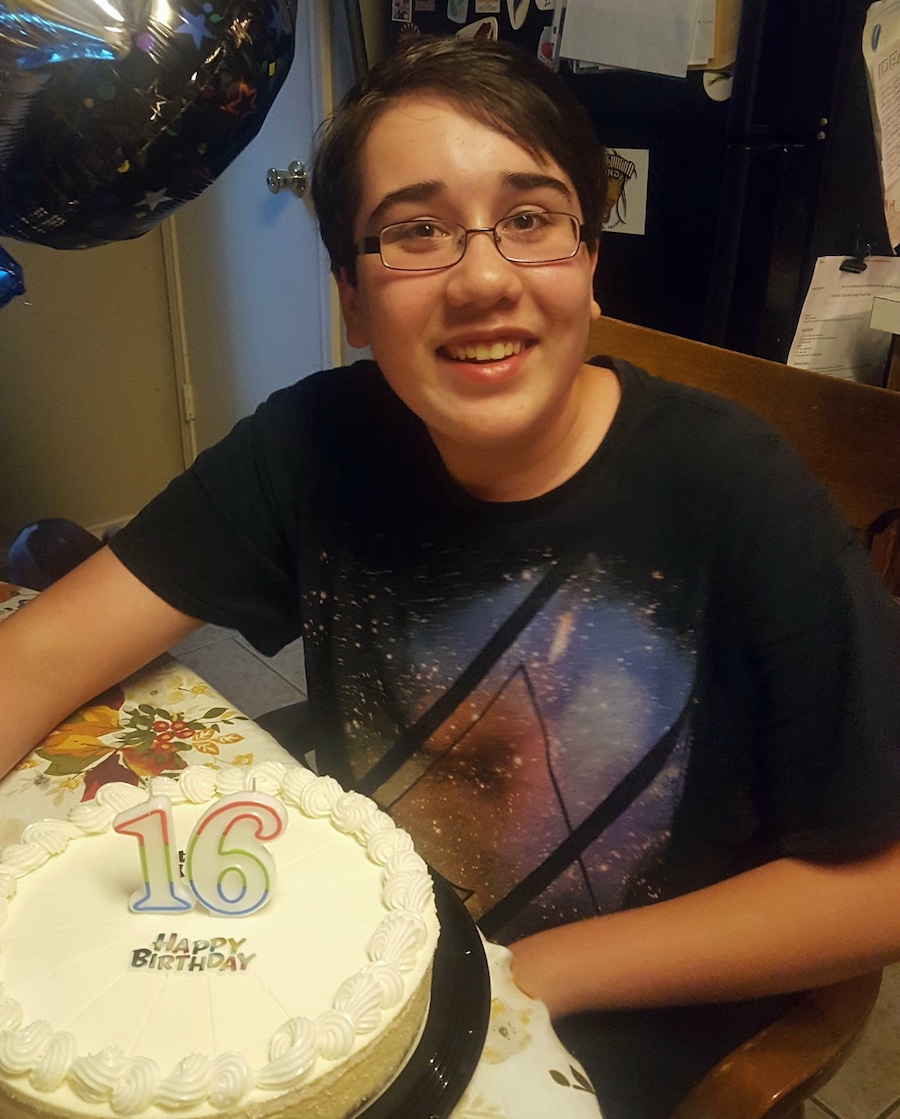 Lorenzo Fullen has been seizure-free for more than three years after a genetic test pinpointed the cause of his epilepsy and helped doctors prescribe an effective treatment.

Mrs. Fullen’s family is reaping the benefits of that knowledge every day as 16-year-old Lorenzo is sleeping restfully and performing better in school.

She still gets emotional recalling her son’s screams in the middle of the night – an occasional waking nightmare she bares with the comfort of knowing Lorenzo can now live a normal life.

“I have my kid back,” she said. “I don’t have to watch him suffer anymore.”

Dr. Park is an Associate Professor of Pathology at UT Southwestern and Medical Director of the Advanced Diagnostics Laboratory at Children’s Medical Center Dallas. Dr. Thodeson is an Instructor of Pediatrics and Neurology & Neurotherapeutics.

Other UT Southwestern researchers involved in the Journal of the American Medical Association Pediatrics study include first author Dr. Jeffrey SoRelle, a Pathology resident who graduated from UT Southwestern Medical School and received the 2016 Vernie A. Stembridge, M.D., Scholarship Award in Pathology; Dr. Susan Arnold, Professor of Neurology & Neurotherapeutics and Pediatrics; and Dr. Garrett Gotway, Assistant Professor of Pediatrics and Internal Medicine with the Eugene McDermott Center for Human Growth and Development and a 2007 graduate of UT Southwestern Medical School.

The study was supported with funding by the National Center for Advancing Translational Sciences, part of the National Institutes of Health.