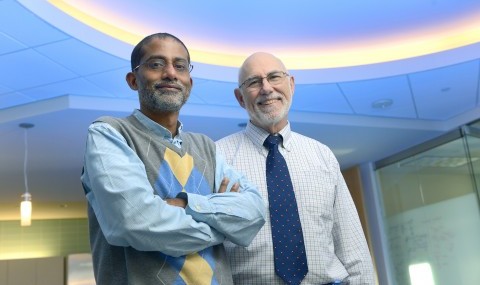 “We’ve known for a long time that exposure to radiation causes cancer, but the radiation we have experience with here on Earth is different from that in space,” said Dr. Burma. “It’s a long haul to Mars – three years there and back – and astronauts would be exposed to a lot of space radiation, so it’s important that we understand how this exposure would affect them.”

“We will use a particle accelerator at Brookhaven National Laboratory to simulate space radiation and study the effects of this type of radiation on mouse models of cancer. The knowledge derived from this research will help us develop cancer risk projection models for astronauts,” said Dr. Burma.

The effects of particle radiation on cells vary, depending on the particle involved, with heavier particles causing more damage to a cell’s DNA. Therefore, Dr. Burma’s experiments will analyze particle radiation involving several elements, including hydrogen, carbon, silicon, and iron.

“We hypothesize that an in-depth mechanistic analysis of particle radiation-induced brain cancer in these validated mouse models will allow us to make significant progress toward cancer risk assessments and to help develop protective strategies for particle-radiation exposure,” said Dr. Burma.

Dr. Shay’s work will look at a potential way to prevent some of the effects of exposure to galactic cosmic radiation.

“Studies have consistently shown that space radiation causes more damage than terrestrial radiation, so we need to be working on biological countermeasures, and the CDDO drug looks promising in this regard,” said Dr. Shay, who holds The Southland Financial Corporation Distinguished Chair in Geriatrics.

CDDO, also known as bardoxolone, is a molecule that has both antioxidant and anti-inflammatory properties.  Bardoxolone is not currently approved for use as a drug, but has been evaluated in the past to treat chronic kidney disease and is currently in clinical trials as a potential lung disease therapy.

Dr. Shay’s lab has previously shown that CDDO reduces the incidence of cancer in mouse models of both colon and lung cancer by more than 50 percent if administered before radiation exposure. The new experiments will use lower doses of particle radiation that are similar to the exposure that astronauts would face during a prolonged space journey.

The radiobiology experiments by both UT Southwestern researchers will be conducted at Brookhaven National Laboratory in Upton, N.Y., where beams of high-energy ions will be used to simulate space radiation. NASA expects their research to sharpen risk prediction for cancer and to contribute to the development of biological countermeasures to mitigate risk.

“This research could also have implications for cancer therapy,” said Dr. Burma. “Particle radiation is increasingly being used in the clinic to treat cancer patients, and our mouse models will help us evaluate the risks vs. benefits of particles being used for radiation therapy.”

“I think it’s important for America to have vision, to be forward-looking, and that’s something that NASA does for us,” said Dr. Shay. “People forget all of the technology that we use today that grew out of the early space missions. This research could translate into medical benefits here on Earth. The CDDO drug may, for instance, someday be given to patients before they get radiation treatment to prevent damage to healthy tissue.”

Dr. Shay is a paid member of the scientific advisory board of Reata Pharmaceuticals Inc., the company that developed CDDO.