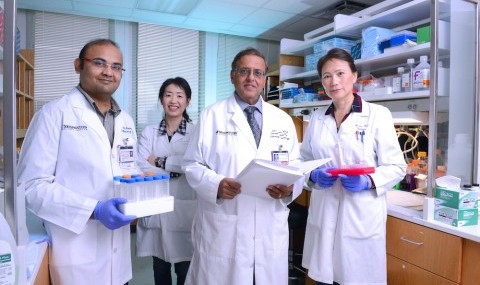 DALLAS – Jan. 15, 2016 – Pediatric researchers at UT Southwestern Medical Center have identified a key component of the pathogenesis of bronchopulmonary dysplasia (BPD), a devastating and sometimes fatal lung disease that affects premature infants. Their findings clarify what prompts the inflammatory response that results in BPD, which previously had been unclear.

The study, published in Nature Communications, determined how the NLRP3 inflammasome activates the protein Interleukin 1 beta, which in turn triggers inflammation and development of BPD.

In an animal model of BPD, researchers also tested two FDA-approved drugs that either block the effect of or decrease the production of Interleukin 1 beta and found that these treatments allowed more normal lung development.

Bronchopulmonary dysplasia, a common chronic lung disease in premature infants, develops as a result of the ventilation and oxygen necessary for these infants to survive. Infants born before 30 weeks gestation have immature lungs that lack surfactant, a substance comprised of phospholipids and proteins that is needed for lungs to properly function. This causes premature infants to develop respiratory distress syndrome, requiring the aid of mechanical ventilation. The infants’ exposure to elevated oxygen levels during ventilation activates the process of inflammation that leads to BPD.

“The same ventilation that ultimately saves their lives, damages their lungs,” said Dr. Rashmin Savani, Professor and Chief of Neonatal-Perinatal Medicine, and senior author of the study. “Our findings suggest that if we target premature infants born at less than 28 weeks gestation from three to 10 days after birth with this therapy, we might be able to drastically reduce or even eliminate the development of BPD.” Dr. Savani also holds the William Buchanan Chair in Pediatrics.

To confirm NLRP3’s role in regulating the inflammatory process of BPD, researchers used neonatal animal models exposed to 85 percent oxygen, which is a key cause of the inflammation and decreased development of tiny air sacs in the lungs called alveoli. They also examined tracheal aspirate samples from premature infants to establish the importance of the NLRP3 inflammasome in the development of BPD.

Some current treatments for BPD include close monitoring of fluid buildup in the infant’s lungs as well as the use of bronchodilators, steroids, and diuretics. However, to date, very few approaches have prevented the development of BPD or reduced its severity, including the use of caffeine to prevent premature apnea (suspension of external breathing) and vitamin A given in the first four weeks of life. The current findings identify a new target for the prevention of BPD or reducing its severity.

Previous studies have examined the role that the NLRP3 inflammasome plays in the development of other inflammatory diseases, such as type 2 diabetes and atherosclerosis, but no one has looked at its role in human BPD development. Next steps include testing the therapeutic intervention strategies outlined in this study in larger animal models, potentially followed by a Phase 1 clinical trial.

The study was funded by grants from the National Institutes of Health and Children’s Medical Center Foundation.