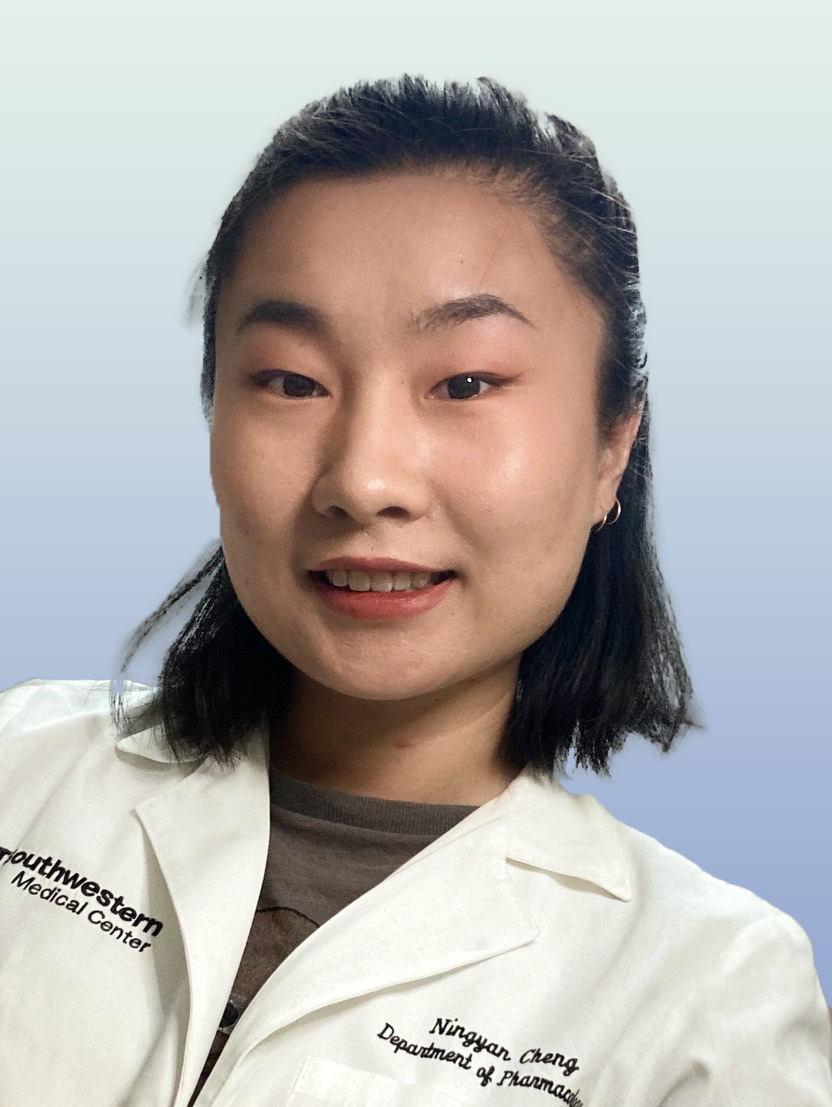 The Graduate School of Biomedical Sciences is pleased to announce Rui Chen of the Cell and Molecular Biology Graduate Program as the recipient of the 2022 Nominata Award, the highest honor for academic and research accomplishment bestowed by the graduate school unto an advanced graduate student. The ten nominees this year were exceptional, and two of the other finalists will receive Dean’s Discretionary Awards: Abigail Watterson from Peter Douglas’ lab and Mahmoud Elguindy, an MSTP student from Josh Mendell’s lab, both in the Genetics, Development and Disease Graduate Program and the Department of Molecular Biology.

A graduate of Wuhan University in the People’s Republic of China, Rui Chen first came to UT Southwestern in 2016 through an undergraduate exchange program, during which she worked in the lab of Xuewu Zhang, Professor of Pharmacology. Rui is now completing her dissertation research in the lab of James Collins, Associate Professor of Pharmacology, where she is studying the molecular mechanism of male-induced reproductive biology in the Schistosome human parasitic flatworm. During her time as a graduate student, Rui addressed one of the largest mysteries in parasitology by identifying the mechanism by which close physical proximity between male and female worms results in induction of sexual maturity and egg laying.  Through a rigorous combination of genetic, biochemical and metabolomic approaches, she discovered a novel signaling peptide (b-alanyl-tryptamine) that is released from male worms when in the close proximity of females.  Furthermore, she showed that the enzyme that makes this peptide is conserved from insects to hemichordates, suggesting that this is a widely used new signaling pathway in a variety of metazoans, with great implications for novel therapeutics.

Rui has demonstrated academic excellence and an exceptional level of research achievement.  Her accomplishments serve as an outstanding example for all graduate students of UT Southwestern. Please join us in congratulating Rui Chen.

The Graduate Student Organization (GSO) created the Nominata Award in 1980 to stimulate academic excellence and research achievement among the advanced graduate students. The award consisted of a monetary prize and a gift certificate from Majors Scientific Books. Today, the Committee on Graduate School Awards, comprised of graduate school faculty, judges the nominees. The recipient receives a monetary award and the honor of presenting their research to the UT Southwestern community within the forum of the University Lecture Series. 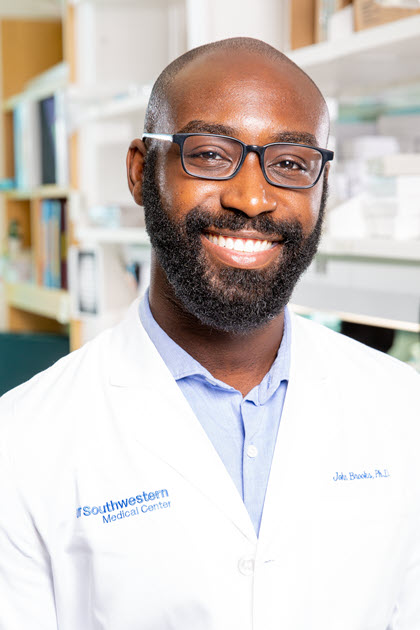 The Graduate School of Biomedical Sciences is pleased to announce that John F. Brooks II, Ph.D., a former postdoctoral scholar in the Department of Immunology, is the 2022 recipient of the Brown-Goldstein Award for Excellence in Postdoctoral Research. Dr. Brooks has recently transitioned to his new appointment as an Assistant Professor in the Department of Molecular Biology at Princeton University.  Honoring the contributions of Drs. Brown and Goldstein to the training of the next generation of scientists, this award is the highest honor for research accomplishment bestowed by the Graduate School on a postdoctoral trainee. Chosen by a committee of graduate school faculty members, the winner receives a monetary prize as well as the opportunity to present the University Lecture.

Dr. Brooks’ research interests center on understanding how animals establish and maintain harmony with the vast consortia of microorganisms that colonize the intestine. These microorganisms, collectively known as the microbiome, promote immunity in their animal hosts. During his postdoctoral training in the lab of Lora Hooper, Ph.D., he discovered a novel molecular mechanism by which a member of the gut microbiota coordinates with the host circadian clock to promote diurnal rhythms in the expression of antimicrobial proteins. In work that was recently published, Dr. Brooks discovered daily rhythms in the expression of certain antimicrobial proteins in the mouse intestine are generated by rhythmic epithelial attachment of segmented filamentous bacteria (SFB). He found that the rhythms in SFB attachment were in turn regulated by daily host feeding rhythms that are controlled by the circadian clock. He identified the immunological mechanism underlying the generation of these rhythms, defined how the host circadian clock is involved, and showed how rhythms in antimicrobial protein expression cause susceptibility to bacterial infection to vary across the day-night cycle. Dr. Brooks’ findings thus revealed that host feeding rhythms synchronize with the microbiota to promote innate immune rhythms that anticipate exposure to foodborne bacteria. Altogether, these findings provide new insight into how intestinal immunity is regulated. 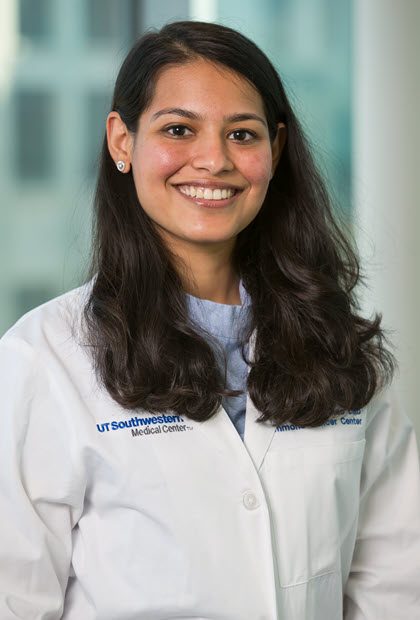 Ms. Shah is doing outstanding research as a senior Ph.D. candidate in the Genetics, Development and Disease (GDD) Graduate Program in the lab of Eric Olson, PhD, Department of Molecular Biology. Her initial work in the Olson lab focused on neonatal heart regeneration and has resulted in three co-authorships in high impact journals. Her more recent discoveries involve the role the role of a transcription factor, Twist2, in rhabdomyosarcoma, with multiple manuscripts in preparation. Her scientific presentation and communication skills are exceptional, and she is also a mentor and role model to others in the lab.

Ms. Shah’s impact extends well beyond the laboratory to the broader Graduate School community. She has been instrumental in developing new opportunities for career development, notably serving as President of the Biotechnology Club and being the impetus for bringing the 3-Minute Thesis competition to our campus. She has also supported fellow students as a graduate teaching assistant and mentor and as a member of the GSO Leadership Board and the GDD Student Executive Committee. In addition, Ms. Shah has been active in outreach, volunteering at the cardiovascular booth at Carnival De Salud and participating as a judge at the International Genetically Engineered Machine (iGEM) competition for undergraduate students. Her strong work ethic and commitment to quality have enabled her to do all these activities and more without compromising the excellence of her work in the lab.

The award will be presented at a private ceremony that will include guests of the recipient, graduate school faculty and staff, members of WISMAC, representatives of Southwestern Medical Foundation and of the Cecil Green Estate.

The Ida M. Green Award was established in 1987 with a bequest from Mrs. Green to Southwestern Medical Foundation. With encouragement from her husband, Cecil Green, the award was established to acknowledge a female graduate student in the UT Southwestern Graduate School of Biomedical Sciences who has demonstrated an outstanding commitment to research excellence, the well-being of fellow students, and exceptional community service. The honor comes with a monetary award provided by the Women in Science and Medicine Advisory Committee (WISMAC) and Southwestern Medical Foundation. 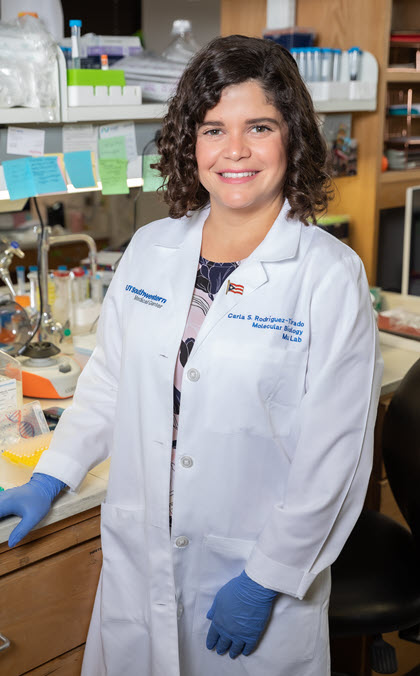 On behalf of the Graduate School Awards Committee, we are pleased to announce the recipient of the William F. and Grace H. Kirkpatrick Award is Carla Rodriguez Tirado.

The William F. and Grace H. Kirkpatrick Award is given annually to the graduate student who submitted the most scientifically meritorious NIH F or equivalent fellowship grant application during the prior academic year, as judged by the Graduate School Awards Committee. The award provides funds to kickstart the proposed research, irrespective of the funding agency’s decision.

The recipient for this year is Carla Rodriguez Tirado, a graduate student in the laboratory of Ping Mu, PhD, in the Department of Molecular Biology. Ms. Rodriguez Tirado’s application, entitled “Dissecting the Role of UBE2H1 in Prostate Cancer,” was chosen from among 17 eligible submissions. The Mu lab will receive $30,000 to support the proposed research. The grant was submitted to NIH/NCI in April, 2021 and received an outstanding priority score; a funding decision is currently pending budget approval.

The proposed research addresses advanced prostate cancer characterized by recurrent genomic copy number alterations that are presumed to contribute to the resistance towards androgen receptor targeted therapies, one of the biggest challenges in treating this deadly disease. Through a comprehensive in vivo library screen and CRSISPR-mediated gene depletion, Ms. Rodriguez Tirado identified Ubiquitin-Conjugating Enzyme E2 J1 (UBE2J1) as a top candidate which may confer resistance to AR targeted therapy. Her proposed study aims to determine the functional role of UBE2J1 in advanced prostate cancer and elucidate the molecular mechanism of UBE2J1-loss mediated resistance in order to eventually overcome it and improve the clinical outcome of patients.