In the 1980s and 1990s, UT Southwestern Medical Center achieved prominence as one of the premier academic medical centers in the nation. Programs for training the physicians, scientists, and allied health professionals of the future expanded, along with major growth in the institution's clinical and research programs.

Kern Wildenthal, M.D., Ph.D., was named Dean of the Medical School in 1980 and was appointed as the second President of the institution in 1986. At that time, the annual budget was $185 million; research grants were $55 million; clinical earnings approached $30 million; space totaled 1.8 million square feet; and the Medical Center's endowment stood at $38 million.

In 1984 a new outpatient building was completed, providing a location for UT Southwestern clinicians to see referred patients. Faculty members were responsible for groundbreaking biomedical research and clinical advances during the 1980s and 1990s. Four faculty members received the Nobel Prize during this period. 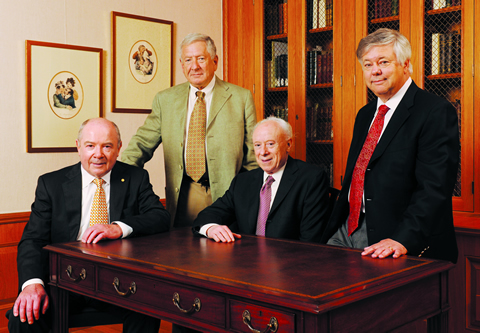 Our Nobel laureates include (from left to right) Johann Deisenhofer, Ph.D., Alfred Gilman, M.D., Ph.D., Joseph Goldstein, M.D., and Michael Brown, M.D. All four received the Nobel Prize in the 1980s and 1990s.

In 1985 Michael Brown, M.D., and Joseph Goldstein, M.D., became the first Texas scientists to be awarded a Nobel Prize. The award recognized their discovery of the underlying mechanism of the regulation of cholesterol metabolism. Their findings led to the development of the cholesterol-lowering statin drugs.

Johann Deisenhofer, Ph.D., received the Nobel Prize in 1988 for his work identifying the three-dimensional structure of a large membrane-bound protein molecule.

Alfred Gilman, M.D., Ph.D., won the 1994 Nobel Prize for his discovery of G proteins, a key determinant of how cells receive and communicate signals and respond to external stimuli.

In 1985 the Howard Hughes Medical Institute selected UT Southwestern as the site of one of its largest research centers.

In 1988 UT Southwestern received a major gift of land from the John D. and Catherine T. MacArthur Foundation to begin a new North Campus expansion. A 30-year master plan for the site was developed to include 13 major buildings, four of which had been completed by 1999.

In 1989 the institution opened Zale Lipshy University Hospital, a private nonprofit hospital for UT Southwestern's referred patients, providing an important opportunity to expand the Medical School's services to a broader array of patients.

As state support of higher education reached a plateau in the mid-1980s, philanthropic gifts became essential elements in the institution's continued growth in size and quality. Between 1987 and 1996, the school received donations of $25 million or more from the Harold C. Simmons Foundation, the Perot Foundation, the Excellence in Education Foundation, Nancy B. Hamon, Sarah M. and Charles E. Seay, and an anonymous donor.

In 1998 philanthropic support enabled the medical center to establish the Endowed Scholars Program in Medical Science, to attract and retain the world's top young faculty at the inception of their careers and ensure the institution's future pre-eminence.

“I don't believe that the work that Joe and I have done could have been done at any other institution, because no other institution has the combination of assets and people that have made it possible.”