The Years of Organization

The story of UT Southwestern Medical Center is one of ambitious growth and progress. Its history is linked to the story of Southwestern Medical Foundation, established by E. H. Cary, M.D., in 1939 with support from Dallas' major civic leaders. Their vision and foresight made possible the establishment of what would become, in a remarkably short period, one of the world's leading academic medical centers.

When Baylor College of Medicine moved from Dallas to Houston in 1943, Southwestern Medical Foundation trustees became determined that their city would continue to have a medical school and formed Southwestern Medical College. Classes and laboratories were located in temporary army barracks behind the old Parkland Hospital, which served as the Medical School's facility for clinical teaching. Seventeen full-time faculty members and 200 students started that first year in academic space totaling 50,000 square feet, with an annual operating budget of less than $300,000. 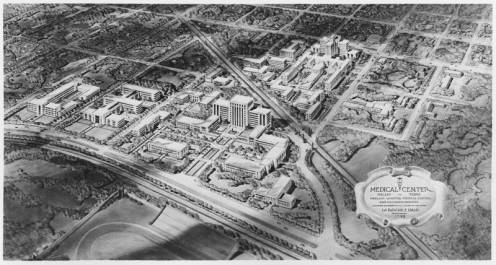 Southwestern Medical Foundation developed plans for a grand medical complex—incorporating Southwestern Medical College—on Harry Hines Boulevard at Oak Lawn Avenue, as illustrated in this drawing. The plan is the work of prominent Dallas architects LaRoche & Dahl. However, the medical school campus was actually built farther from downtown at the intersection of Harry Hines Boulevard and Inwood Road.

In 1946 Dallas philanthropist Karl Hoblitzelle donated 62 acres of land adjacent to the proposed site of the new Parkland Hospital to provide a campus for the new medical school.

In 1949, recognizing the need to affiliate with a strong university system, Foundation trustees donated the Medical School to the state of Texas and it became part of The University of Texas System.

The 1950s brought growth and change to the Medical School, both in the institution's leadership and in its physical presence within the city of Dallas.

In 1951 the Texas Legislature approved funds to construct the school's first permanent building, which was occupied in 1955, adjacent to the new Parkland Memorial Hospital.

In 1952 Donald Seldin, M.D., was appointed Chairman of Internal Medicine and began a long and distinguished career as one of the institution's builders and guiding forces. An affiliation with the Veterans Administration Hospital of Dallas was developed during the 1950s, providing an important additional site for medical education, research, and clinical care.

“The Medical School, at the outset of the 1950s, had almost no financial resources whatsoever, and the facilities were poor. It was an opportunity as well as a problem. Fortunately, we had resources of a kind which should be remembered: we had students; we had house staff; and we had student fellows. They would be, ultimately, the faculty of the future.”