To promote research that will contribute to an understanding of the mechanisms at work in aberrant cell regulatory networks that support cancer initiation and growth. 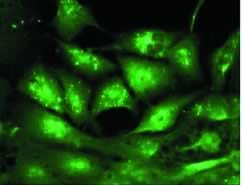 Activation of autophagy in cells from the lung cancer cell line HCC827 upon treatment with the EGFR inhibitor erlotinib.

Cancer Cell Networks has 45 members representing 14 departments and centers. Key goals of the program are to define mechanisms and pathways that integrate external and internal regulatory cues at the cell autonomous level; determine how aberrant cell regulation contributes to the transformation of normal cells to cancer cells; and to engage translational and clinical scientists in investigating whether modulating specific aspects of cell regulation has therapeutic potential against cancer.

The cGAS-STING pathway of innate immunity. Zhijian “James” Chen, Ph.D., and colleagues are shedding new light on our understanding of innate immune responses to DNA and RNA. Combining classical protein purification with quantitative mass spectrometry, the researchers have discovered a new enzyme, cyclic GMP-AMP synthase (cGAS), that acts as a sensor of innate immunity – the body’s first line of defense against invaders.

The work also has described a novel cell signaling pathway: When cGAS detects foreign DNA or even host DNA that is in the cell’s cytoplasm, the enzyme binds to the DNA, catalyzing formation of a chemical called cyclic GMP-AMP, or cGAMP, a naturally occurring compound in a class known to exist in bacteria but never before seen in multicellular organisms. Then cGAMP binds to the protein STING, activating a signaling cascade that produces interferons and pro-inflammatory cytokines.

In addition to demonstrating the pathway’s significance in innate immune defense and in autoimmune diseases, Dr. Chen’s lab has shown that cGAMP can increase antibody production and T-cell activation, highlighting a potential role in boosting anti-tumor immunity and developing cancer vaccines. 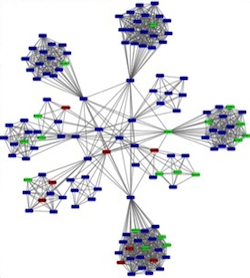 Functional Signature Ontology (FUSION). This novel technique, developed in a cross-disciplinary initiative led by Michael White, Ph.D., and John MacMillan, Ph.D., is using cell-based screening and computational analysis to comprehensively identify both promising cancer-fighting chemicals derived from natural marine products and, concurrently, the proteins or biological processes they act on in cells. The technique uses libraries of small interfering RNAs and synthetic microRNAs, whose targets in cells are known, as a Rosetta stone, allowing researchers to match gene expression patterns from the library molecules with those of the marine-derived chemicals. From that, the scientists can infer whether and exactly how the most promising chemicals exert anti-cancer effects.

For details about the program, information on subgroup meeting times and locations, and more, contact Dr. Cobb or Dr. Scaglioni.

Program meetings are attended by all investigators, postdoctoral fellows, students, and scientist-level technical staff. In particular, students from the Cancer Biology Ph.D. Program participate in the regular program meetings as a component of their weekly W.I.P., or Work In Progress. 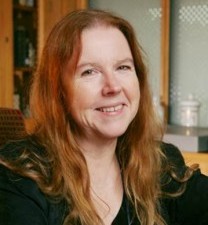 For contact information and an overview of research conducted by each member, select from the list below: