With teen suicides up, doctors bring help straight to schools

DALLAS – March 26, 2018 – Her eyes were downcast and distant. A deep hopelessness imbued her quavering voice.

Her friend touched her arm reassuringly, offering a string of advice often given to depressed people: Suicide isn’t the answer, get professional help, everything will be fine. 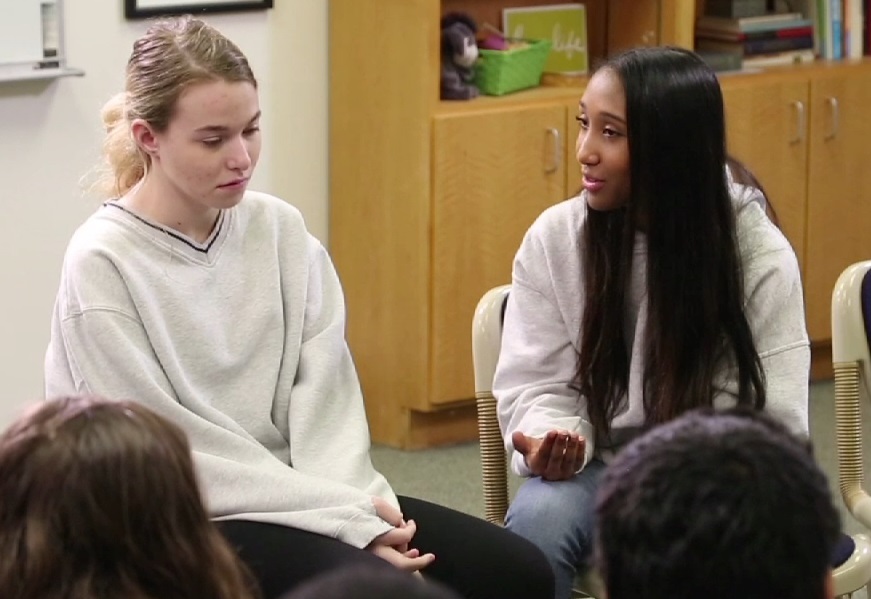 Teenagers participate in a role-play session designed to educate them about depression and suicide. The session is part of a network of programs UT Southwestern is implementing in Texas schools to identify, study, and treat at-risk youth.

“I’m tired of everyone telling me it’ll be OK, because I just don’t feel that way,” the girl retorted bitterly.

The friend hesitated, then looked helplessly at her classmates watching the role-play session unfold at the front of the classroom.

“I don’t really know where to go from there,” the friend acknowledged, as the instructor walked toward the two teenagers to discuss the mock scenario.

The role-playing session is part of a network of education and research programs UT Southwestern Medical Center is implementing in Texas schools to address a startling rise in teen depression and suicide across the country. By accessing classrooms to identify, study, and treat at-risk youth, experts are raising awareness in a vulnerable age group while obtaining critical data that could change the paradigm of combatting mental illness.

Besides helping students cope, the Risk and Resilience Network will assist scientists in a range of clinical endeavors, from developing blood and brain tests for diagnosis to identifying effective treatments and interventions.

“There is an unfortunate misperception that if you talk to teenagers about depression, they’ll get depressed. We have to help people understand: A don’t-ask-don’t-tell policy for depression and bipolar disorder is not effective,” said Dr. Madhukar Trivedi,  founding Director of UT Southwestern’s Center for Depression Research and Clinical Care (CDRC), a cornerstone of the Peter O’Donnell Jr. Brain Institute.

The network has been implemented across North Texas, from sprawling public school districts to smaller private institutions and youth organizations. These schools have access to several education and research programs in and outside the classroom, including a 10-year study of 1,500 participants (ages 10-24) that will uncover factors that reduce the risk of developing mood or anxiety disorders.

Dr. Trivedi said the research will expand the limited understanding scientists have about how to build resilience to these disorders by analyzing socio-demographic, lifestyle, clinical, psychological, and neurobiological factors. Eventually these data will help with early intervention and reduce the risk of serious mental illness.

The network also seeks to help pediatricians follow new national guidelines that call for all teenagers to be screened for depression. The VitalSign6 initiative equips these doctors and family practitioners with mental health-screening tools and educates them on best practices.

“Early detection, rapid intervention, cutting-edge research, and prevention are key,” said Dr. Trivedi, who led the STAR*D studies that established widely accepted treatment guidelines for depressed patients. “Unlike a lot of other major chronic diseases, these illnesses start early – in middle school and early high school. If we can intervene at that point, then we can have better outcomes.”

The education arm of the network includes a mental health program widely used in Europe to help adolescents cope with mood and anxiety issues. The Youth Aware of Mental Health (YAM) program has already drawn interest from some of Texas’ largest school districts and continues to expand.

A team of trained UT Southwestern facilitators, under the supervision of a psychologist, is deployed to classrooms for five one-hour sessions, providing knowledge on mental health and suicide prevention to all students. YAM includes a research component in which depression-screening questionnaires are given to students before and after the program and anonymously entered into a database for analysis.

The Risk and Resilience Network comes at a critical time for the field of mental health, which has seen a sharp rise in cases of depression and suicide among adolescents. A 2016 study found that the rate of adolescents in the U.S. who reported a major depressive episode within the previous year rose to 11.3 percent in 2014, a 37 percent increase from 2005. A separate study published in 2016 found that suicide rates among girls ages 10-14 tripled from 1999-2014.

‘There’s definitely a stigma. People don’t like to acknowledge it, especially the people who are depressed. They feel embarrassed and don’t want to talk.’ – Bradley Davis, senior at Lovejoy High School 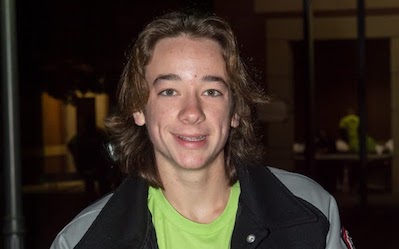 The losses struck him hard, in part because he didn’t notice signs of distress in either person.

“There’s definitely a stigma,” Bradley said. “People don’t like to acknowledge it, especially the people who are depressed. They feel embarrassed and don’t want to talk.”

Lovejoy is striving to change that mindset by enrolling its ninth-grade classes in the network. And based on parent feedback and the personal stories shared with school counselors, the district is hoping to soon expand its participation into middle school classes, said Sancy Fuller, Executive Director of Special Education and Academic Support at Lovejoy Independent School District.

“There is a need,” said Ms. Fuller, adding that students have gravitated mostly toward the network’s interactive and role-playing sessions. “We’re trying to be proactive, as opposed to waiting and having someone end up in a crisis that we potentially could have avoided.”

Plano Independent School District, one of Texas’ larger districts with nearly 55,000 students, also enrolled in the network this school year after enduring student suicides. But unlike most districts, Plano high schools are offering the program to all grade levels, from freshmen to seniors.

“I would love to see everyone exposed to this kind of learning because tragedy impacts us in powerful ways,” said Jana Hancock, Plano ISD’s Director of Guidance and Education Services.

She said her counselors have seen a dramatic increase in students either self-reporting their depression or sharing concerns about friends. “And that’s what we want from our students,” she said. “Students will usually talk to each other first, so it’s up to them to let us know when there’s a problem.”

UT Southwestern’s experts are on the frontline of this effort, giving lectures about mental health and meeting with students in classrooms. They also hold outreach events for parents to learn about other network programs available to their children.

Students not only acquire knowledge about mental health but also have occasionally sought help on their own after recognizing risk factors, said Dr. Jennifer Hughes, a clinical psychologist and Assistant Professor of Psychiatry who leads the YAM initiative in schools.

She recalled one girl who approached her after a session because she was worried about how stress from home life and school were affecting her well-being. Dr. Hughes suggested she meet with her school counselor and walked her there for introductions. The following week, the girl thanked Dr. Hughes and described how that initial meeting set her on the path to much-needed therapy.

“That was an example of the program doing exactly what it was intended to do – getting students to talk about these things and seek out possible solutions,” Dr. Hughes said.

The network is in its second school year and is still expanding as more mental-health experts are trained to help schools address the issue of depression and suicide.

Dr. Trivedi expects the data obtained through the first few years will enable his team to predict risk and resilience among teens through their associated biomedical research.

“For every teen who commits suicide, there are so many who are suffering equally. The earlier we can screen and identify the kids who need help, the better chance they have in the long term,” said Dr. Trivedi, Professor of Psychiatry who holds the Betty Jo Hay Distinguished Chair in Mental Health and the Julie K. Hersh Chair for Depression Research and Clinical Care.

UT Southwestern Medical Center is implementing a network of mental-health programs in Texas schools to address a startling rise in teen depression and suicide across the country. The Risk and Resilience Network is a rare example of a major medical institution accessing schools to identify, study, and treat at-risk youth.

Why are mood disorders a pressing issue in U.S. schools?

The U.S. has seen a sharp rise in cases of depression and suicide among adolescents. A 2016 study found that the rate of adolescents in the U.S. who reported a major depressive episode within the previous year rose to 11.3 percent in 2014, a 37 percent increase from 2005. A separate study published in 2016 found that suicide rates among girls ages 10-14 tripled from 1999-2014.

How does the network work?

School districts that join the network have students participate in the Youth Aware of Mental Health program. A team of trained UT Southwestern facilitators, under the supervision of a psychologist, deploy to classrooms for five one-hour sessions, providing lectures and leading interactive discussions on mental health and suicide. UT Southwestern holds informational events at these campuses to educate parents about other network programs available to students who volunteer. These include long-term studies addressing which factors drive depression, as well as an outpatient program that focuses on reducing risk of suicidal thoughts.

What are the primary goals of the Risk and Resilience Network?

The network aims to improve detection, intervention, and prevention of mood disorders through education and research. School outreach will create awareness about mental health among middle school and high school students, regardless of whether they are experiencing major depression or anxiety. Because mood disorders often begin developing in this age group, doctors hope early intervention can help students’ long-term prognosis.

Through cutting-edge research, scientists hope to develop blood and brain tests for diagnosis and identify effective treatments and interventions. This research is designed to transform the future of depression treatments and resiliency programs. One example is RAD, Resilience in Adolescent Development, a 10-year study that will enroll 1,500 participants who are at risk to develop depression but have not done so. Researchers will examine whether personal factors such as lifestyle and biology influence a teenager’s ability to resist mood disorders.

How many students will the network reach?

The network is being implemented across North Texas, from sprawling public school districts to smaller private institutions and youth organizations. It is still expanding as more mental-health experts are trained and deployed to campuses. Network leaders say UT Southwestern can become a training center for other entities interested in starting a similar effort in other regions of Texas and beyond.

How can schools or parents enroll students in the network?

Contact Dr. Madhukar Trivedi, who oversees the network at UT Southwestern’s Center for Depression Research and Clinical Care, part of the Peter O’Donnell Jr. Brain Institute. You can reach him by emailing Madhukar.Trivedi@utsouthwestern.edu or calling 214-648-6262.