Center for Pulmonary and Vascular Biology

In 2005, a Division of Pediatric Pulmonary and Vascular Biology (PVB) was established to provide a programmatic research home for pediatric faculty and trainees pursuing basic research in pulmonary biology and vascular biology. It was an exclusively research-driven division in the Department of Pediatrics, one of but a handful of research divisions in pediatrics departments nationwide, thereby representing a novel concept that amplifies the efforts and effectiveness of pediatric faculty and trainees alike.

Under the direction of Philip Shaul, M.D., Professor and Vice Chair for Research, the Center provides a valuable resource for campus-wide investigative endeavors. This is represented by active collaborations between PVB faculty and other UT Southwestern faculty in the departments of Internal Medicine, Cell Biology, Physiology, Pharmacology and Biophysics, and by participation of PVB faculty in numerous training and center grants across the campus.

Notably, in 2009 a shared effort by PVB and the Division of Pulmonary and Critical Care Medicine in the Department of Internal Medicine resulted in procurement of a coveted T-32 training grant from the National Institutes of Health to support postdoctoral research training at UT Southwestern Medical Center in lung biology and disease. The T-32 award was successfully renewed in 2014. 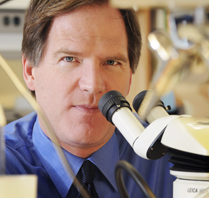