Miriam Osterfield's training includes a Bachelor's degree in Biology from MIT and a Ph.D. in Cell and Developmental Biology from Harvard. Her graduate work in neural development, mentored by John Flanagan, Ph.D., led to the identification of novel ligands for the Amyloid Precursor Protein.

In her subsequent postdoctoral work with Stanislav Shvartsman, Ph.D., at Princeton University, she turned to the subject of epithelial morphogenesis.

Epithelial morphogenesis refers to the biological process in which a flat sheet of epithelial cells is transformed into a three-dimensional tissue. Epithelial morphogenesis is essential for the formation of many organs during embryonic development, including the neural tube, lungs, and kidneys. Initially, when epithelial sheets are still flat, they are patterned so that different regions of the sheet express different gene products.

Dr. Osterfield is using the eggshell appendages of the fruitfly Drosophila melanogaster as a model system for studying epithelial morphogenesis. These appendages are formed and shaped by epithelial tubes, and their formation is highly amenable to genetic analysis. Interestingly, eggshell appendages vary in size, shape, and number among different drosophilid species.

Dr. Osterfield is using genetics, imaging, computational modeling, and evolutionary comparisons to examine the links between gene expression, cellular forces, and tissue deformation in this system. 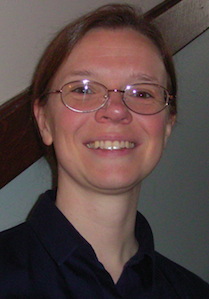