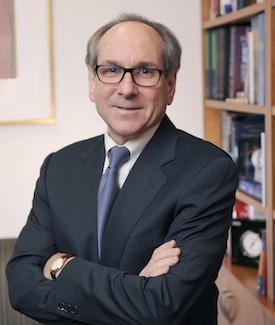 Since arriving at UT Southwestern, Dr. Podolsky’s agenda has focused on keeping UT Southwestern at the frontiers of science by enhancing its faculty and activities in basic, translational, and clinical research and on promoting clinical transformation through a commitment to excellence and innovation in patient care.

His priorities also include ensuring that UT Southwestern educates and trains future physicians, scientists, and allied health care professionals in programs that optimally prepare them for the changing landscape in scientific research and health care delivery, and he has launched important new initiatives in global health and faculty diversity.

Noteworthy highlights of his presidency to date include: the development of Southwestern Health Resources, a clinically integrated network leveraging the strengths of UT Southwestern and Texas Health Resources, which encompasses 31 hospital locations, 300 clinics, and more than 2,600 physicians across a 16-county area; the creation of the Peter O’Donnell Jr. Brain Institute, which is working to address the devastating toll of diseases of the brain, actively using sophisticated techniques in gene editing, biomarker analysis, and other advanced technologies to better understand, treat, cure, and prevent a wide range of neurological and brain disorders; the transformative gift of $100 million from former Texas Governor William P. Clements Jr. in 2009; the award of the Nobel Prize in Physiology or Medicine to a fifth UT Southwestern faculty member, Bruce Beutler, M.D., in 2011 and to a sixth, now adjunct, faculty member, Thomas Südhof, M.D., Ph.D., in 2013; the election of five faculty to the National Academy of Sciences, bringing the total number at UTSW to 23; the establishment of institutional affiliations with medical centers in China, Israel, Peru, and South Africa; and the design and construction of the nationally innovative William P. Clements Jr. University Hospital, which opened in late 2014.

In addition, the Harold C. Simmons Cancer Center received designation of comprehensive status from the National Cancer Institute, its highest level of distinction, and the only facility in North Texas to hold this designation; three new departments (Biophysics, Emergency Medicine, and the Lyda Hill Department of Bioinformatics) have been established, along with several new centers and institutes, including the Texas Institute for Brain Injury and Repair, the Hamon Center for Regenerative Science and Medicine, and most recently, with the support of a $36 million gift from the O’Donnell Foundation, the Peter O’Donnell Jr. Brain Institute.

After several years of planning, a new Medical School curriculum was launched for the Class of 2019; a master plan for the West Campus has been developed, and construction of the first building began in 2016; over 1,400 new faculty appointments have been made; and in a transition to a new generation of academic and clinical leaders, more than 25 new department chairs and center directors have been recruited through national searches.

Prior to becoming the President of UT Southwestern, Dr. Podolsky was the Mallinckrodt Professor of Medicine at Harvard Medical School, the Chief of Gastroenterology at Massachusetts General Hospital, and the Chief Academic Officer of Partners HealthCare System in Boston.

He joined the faculty of Harvard Medical School and the staff of Massachusetts General Hospital in 1981; he was appointed Chief of Gastroenterology at Massachusetts General Hospital in 1989; and he was named the Mallinckrodt Professor of Medicine at Harvard Medical School in 1998. Under his leadership, the GI Unit became one of the leading programs in the country, highly regarded for its dynamic research and training activities, in addition to its comprehensive program of clinical care in gastroenterology. Dr. Podolsky has trained more than 70 GI fellows and over 100 postdoctoral scholars, many of whom are now on the faculties of leading academic medical centers in the U.S. and abroad.

Dr. Podolsky’s own research interests have focused on the delineation of epithelial cell function, and, in conjunction with studies defining basic mechanisms regulating epithelial function, his laboratory provided important insights into the role of these processes in intestinal inflammatory diseases, most especially the inflammatory bowel diseases.

Dr. Podolsky is the author of more than 300 original research and review articles. He is the past editor-in-chief of the journal Gastroenterology. He served as President of the American Gastroenterological Association and was the recipient of its Distinguished Achievement Award in 2007 and its highest honor, the Julius Friedenwald Medal, in 2009. He is also a member of the National Academy of Medicine (formerly the Institute of Medicine of the National Academy of Sciences).