Hyperpolarization is a technique for "supercharging" the spin polarization of MRI tracers that can enhance their MRI signal up to 50,000 times. It involves first freezing a sample to the liquid helium temperature of -452°F to eliminate thermal motion. The sample also contains a polarizing agent—a chemical containing a single stable electron that is already highly polarized at this temperature. When the polarizing agent is bombarded with microwaves, it absorbs energy and transfers it to the molecule of interest for MRI, thereby hyperpolarizing it. This process is called dynamic nuclear polarization (DNP). 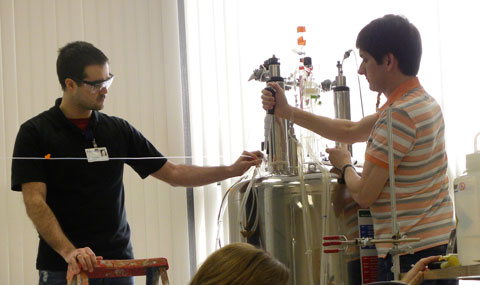 When thawed, a hyperpolarized sample retains a significant amount of this supercharged property for up to several minutes before undergoing "relaxation." Thus, researchers can inject hyperpolarized versions of specially synthesized labeled molecules into the body to act as chemical tracers. As these tracers undergo reactions in the body’s biochemical pathways, researchers can follow the flow of these pathways—for example, analyzing the hyperactive metabolic machinery of tumors.

One widely used atom in hyperpolarization studies is the heavier isotope of carbon, 13C, whose nucleus contains one more neutron than the common 12C. AIRC researchers are using hyperpolarized 13C-labeled compounds to track the metabolic machinery of cancer, diabetes, obesity, heart and liver diseases, and other disorders. They are also using such tracers to measure the neural metabolic pathways responsible for synthesizing neurotransmitters, the signaling molecules by which one neuron triggers its neighbor to launch a nerve impulse.

To advance hyperpolarization technology, AIRC chemists are synthesizing new 13C-labeled compounds tailored to have the 13C label at specific positions on the molecule to extend their relaxation times, thereby making them more useful for tracer studies (Zoltan Kovacs).

They are also developing hyperpolarizable complexes of isotopes other than 13C to give different insights into disease. For example, they are developing complexes containing the metal isotope 89yttrium that, when hyperpolarized, can act as a sensor for pH, temperature, or reduction-oxidation chemical reactions (Kovacs). Measuring pH can be valuable for detecting tumors with MRI because they tend to have a lower pH than surrounding tissues.