Much of technology described in other sections is being combined in a study of human subjects. Both the stable isotopes D2O (see Sources of Glucose) and 13C (Pathway Fluxes) are employed simultaneously to determine metabolic fluxes. These methods give relative values; the addition of a simultaneous infusion of [1,6-13C] or [3,4-13C] glucose allows absolute fluxes to be determined. 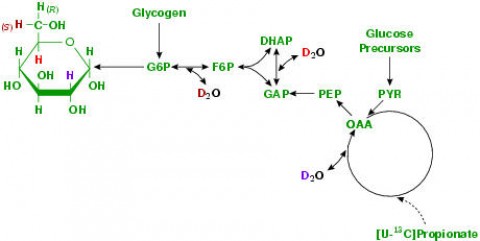 Gluconeogenic and citric acid cycle flux in human subjects. [U-13C] propionate and 2H2O are administered orally; the first determines citric acid cycle activity and rate of conversion of phosphoenolpyruvate (PEP) to glucose, the second the contribution of different substrates to glucose. Color-coding depicts how deuterium exchanged at different parts of the pathway appears on specific carbons of glucose.

The 13C from propionate, provided in tracer amounts, contributes to all of the carbons in glucose; measurements taken from the C-2 are analyzed (see below). Please note that the simultaneous infusion of [1,6-13C] or [3,4-13C] glucose (first paragraph, above) does not interfere with the measurements of 13C present in glucose due to uptake of [U-13C] propionate.

Propionate is a short chain fatty acid present in small quantities in the blood and is avidly taken up by the liver and metabolized. It is used in small amounts to introduce 13C into the citric acid cycle but is not thought to significantly influence metabolism. Measurements of the amount of 13C and 2H present in glucose using NMR do not interfere with each other. The glucose is isolated from blood samples, and is thought to primarily reflect hepatic metabolism, though this remains to be confirmed. 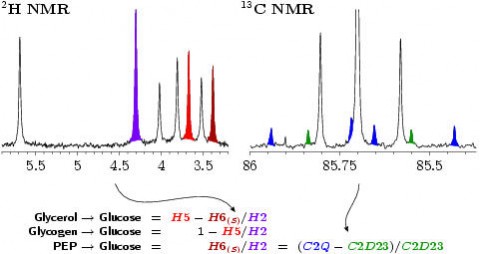 Calculation of fluxes from measurements of MAG prepared from plasma glucose. This illustrates how relative fluxes are determined from 2H (left) and 13C NMR measurements. Since both set of measurements can be used to calculate the flux PEP → Glucose, the rate of citric acid cycle flux can be expressed in terms of total glucose production. Equating the later with respect to glucose turnover as measured by a constant infusion of labeled glucose, all values can be converted to absolute fluxes.

This protocol is proving very valuable as a simple exam that gives a detailed view of hepatic metabolism. It is well accepted by patients and convenient for the nursing staff to conduct.

Present studies using this exam include: