In fMRI, the brain is scanned about every second or so as a human subject performs some mental task. This MRI scan can distinguish oxygenated hemoglobin from deoxygenated hemoglobin, called the blood oxygen-level dependent (BOLD) signal. Since more active brain areas use more oxygen, researchers can distinguish brain regions that activate during the task by an increase in flow of oxygenated blood to that region. By detecting such activated brain regions, researchers gain insights into the neural machinery responsible for particular mental tasks.

MRS enables measurement of the biochemical characteristics of a selected region or tissue. MRS detects molecules that are normally present in brain tissue at much lower concentrations than water. An MRS spectrum consists of an array of peaks that show the identity and number of biomolecules present in the brain in any particular region. AIRC researcher Mark Jeffrey is developing improved mathematical models for analyzing MRS data to give researchers greater insights into the flux through metabolic pathways in the brain, as well as the heart and liver. 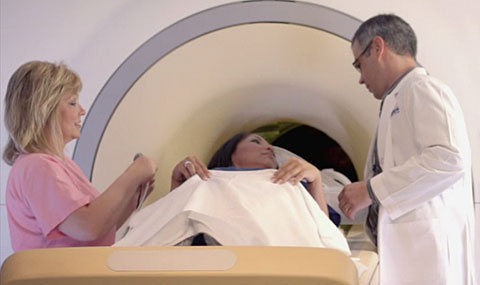 Investigators are using fMRI to understand brain function, including the regulation of blood supply, the mechanism of the fMRI signal, functional connections among brain regions, and neuroplasticity, or how neurons adjust the strength of their interconnections in learning. Their research aims at improving understanding, diagnosis, and treatment of brain disorders, including neurodegenerative diseases, schizophrenia, and cerebral vascular diseases.

Other AIRC researchers are using MRS techniques to enable researchers and clinicians to see concentrations of key chemicals in the brain (Changho Choi). Their techniques can produce measures of these chemicals at localized areas in the brain, or MRS images that reveal concentrations of the chemicals throughout the brain. Their studies are revealing altered levels of these chemicals in diseases including brain tumors, Alzheimer's disease, schizophrenia, and depression.

In addition to probing brain function with MRS, AIRC researchers are also using MRI to map in unprecedented detail the connectivity and structures of human and animal brains. Their objective in human brain mapping is to produce atlases of brain structures at all ages, from newborns to adults, for use in research and teaching. Such detailed structural imaging will enable researchers to understand the structure of the normal human brain, as well as abnormalities in such disorders as autism and attention deficit hyperactivity disorder (ADHD).

They are also using advanced MRI techniques to map the white matter, the brain tissue comprising neurons and their insulating myelin sheaths, in people with Alzheimer's disease, comparing the maps with those of normal brains. Such mapping enables accurate and comprehensive examination of the white matter tracts and determination of the disruption of those tracts in affected brains.

Their MRI maps of the rat brain at different developmental stages will prove useful in exploring animal models of disease, because rats are widely used in genetic studies to model neurological developmental disease. Such studies will also enable animal studies of the effects of drugs on brain development.

In other animal studies, AIRC researchers are also using hyperpolarized 13C-enriched chemicals and MRS to measure flux of these molecules through specific metabolic pathways in the brain and heart (Craig Malloy). In these studies, they are measuring fluxes through the neural metabolic pathways responsible for synthesizing neurotransmitters. These are the signaling molecules by which one neuron triggers its neighbor to launch a nerve impulse.

Such in vivo MRS studies offer the potential for much greater basic understanding of the brain's neurotransmitter machinery, because previous studies have been restricted to analysis of the two basic types of brain cells, glial cells and neurons, grown separately in culture. However, these two cell types interact intimately in the living brain, meaning that in vivo studies enable a more realistic analysis of brain metabolism.

The researchers are also applying MRS techniques to the human brain to study neurotransmitter metabolism. Such studies could reveal significant insights into neural function in the brains of both healthy people and those with such neurological disorders as Alzheimer's disease.