Advancing the study of T cells to improve immunotherapy 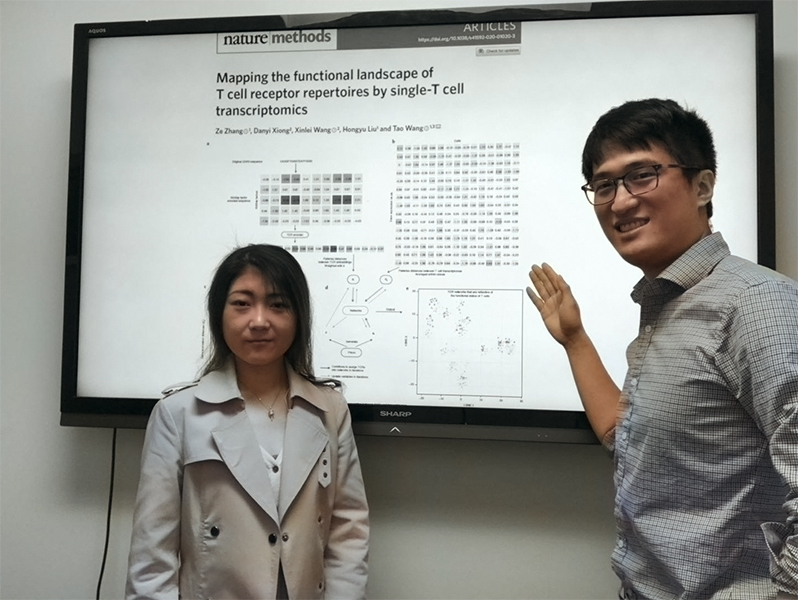 DALLAS – Jan. 6, 2021 – UT Southwestern scientists have developed a new method to study the molecular characteristics of T cells, critical immune cells that recognize and attack invaders in the body such as viruses, bacteria, and cancer.

The approach, described today in the journal Nature Methods, enables researchers to more easily analyze the roles of T cell receptors (TCRs) – the molecules on the surfaces of T cells that are responsible for recognizing pathogens.

“This could lead to a better understanding of how T cells work as well as new ways to harness T cells to fight disease,” says study leader Tao Wang, Ph.D., assistant professor of population and data sciences and a member of the Quantitative Biomedical Research Center at UTSW. 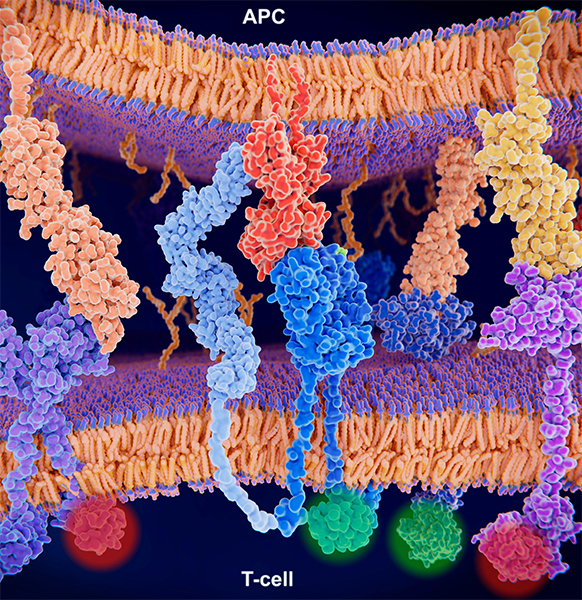 The above illustration, in the center, shows activation of T cell immune response with the interaction of MHC-II (red) with the T cell receptor (TCR, blue), and also CD4 (light blue). CD4 and MHC-II are proteins expressed by T cells and antigen-presenting cells, respectively, to aid the recognition of antigens by TCRs.

While some immune cells can simultaneously attack different pathogens, T cells are more targeted – every individual T cell has a distinct set of T cell receptors (TCRs) on its surface. Each receptor usually recognizes only one specific molecule, or “antigen.” One TCR, for instance, might bind only to a protein found in lung cancers, while a different TCR might bind just to an influenza virus. When a T cell encounters an antigen that binds to one of its TCRs, it becomes activated, prompting an immune response. To ward off the diverse set of potential invaders, humans have millions of different T cells in their bodies.

Scientists have attempted to study what makes different T cells and TCRs more or less effective, hampered so far by a lack of information about what various TCRs do. Generally, they assume that TCRs that look alike must bind to similar antigens, and that all TCRs activate T cells in a similar way.

To eliminate this guesswork, the research team developed a statistical model combining two existing technologies: TCR analysis, which measures a person’s TCR diversity, and single-cell RNA sequencing, which identifies the particular genes that are turned on or off in a T cell. Combining these technologies has been challenging since they both generate many thousands of pieces of data per experiment, and the data comes in two different forms. The new model, dubbed Tessa, uses powerful statistical methods to bridge this gap. Tessa reveals what happens to an individual T cell when its TCR recognizes an antigen, and in what way TCRs impact the function of the T cells. (Tessa stands for TCR functional landscape estimation supervised with scRNA-sequencing analysis.)

Using Tessa, the researchers studied 100,288 T cells from both healthy people and cancer patients. In cancer patients, they discovered that the variety of TCRs in T cells has a weaker influence on the functional status of T cells than on those found in healthy patients. This is likely because a plethora of other immune molecules, secreted into the tumor micro-environment, are influencing T cell activity in other ways. This observation – and others that are likely to result from more widespread use of Tessa – could have implications for scientists designing immune-based cancer treatments.

“Previous techniques have involved a lot of guessing when it comes to the exact function of T cells and how T cell receptors associate with function,” adds Todd Aguilera, M.D., Ph.D., a UTSW assistant professor of radiation oncology, and an expert in immunotherapy, who is also collaborating with Wang. “I believe this method could help the identification of the most promising TCRs for personalized TCR-based immunotherapy and better define productive immune responses to guide identification of the optimal immunotherapy strategies.”

Other researchers on the study were Ze Zhang (first author), a UTSW graduate student, Hongyu Liu, an exchange scholar at UTSW, and Danyi Xiong and Xinlei Wang of Southern Methodist University. This research was supported by funds from the National Institutes of Health (CCSG 5P30CA142543) and the Cancer Prevention and Research Institute of Texas (RP190208).