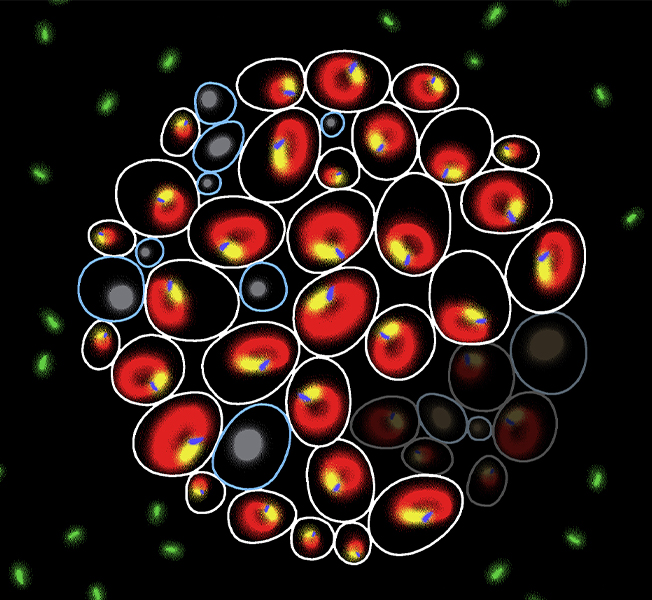 Above are fluorescent images of genetically identical yeast cells, marked for some of the biomarkers that UT Southwestern researchers discovered help to predict cell fate. The yellow is the nucleus, the blue and green are nucleus-vacuole junction (NVJ) markers, and the red is the yeast vacuole.

DALLAS – Jan. 11, 2021 – A set of biomarkers not traditionally associated with cell fate can accurately predict how genetically identical cells behave differently under stress, according to a UT Southwestern study. The findings, published by Cell Reports as a Dec. 1 cover story, could eventually lead to more predictable responses to pharmaceutical treatments.

Groups of the same types of cells exposed to the same stimuli often display different responses. Some of these responses have been linked to slight differences in genetics between individual cells. However, even genetically identical cells can diverge in behavior. 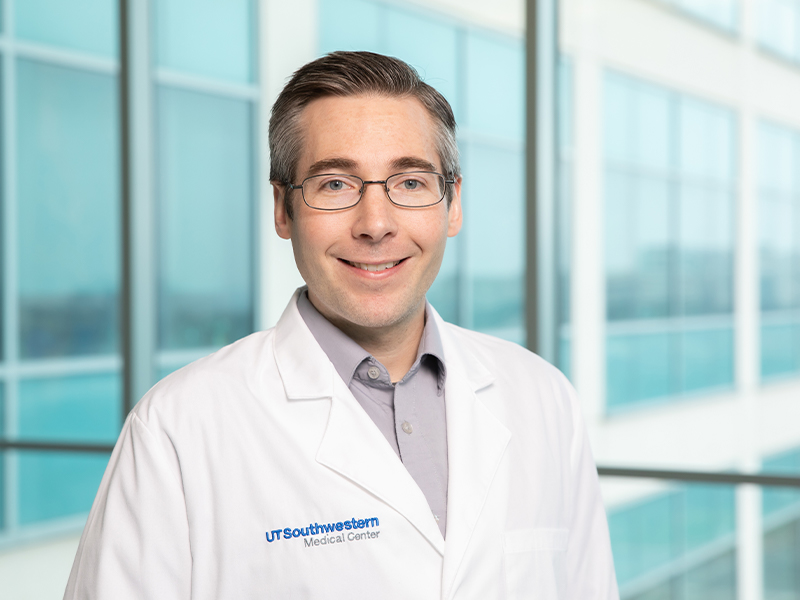 One example can be found in budding yeast, or yeast that are actively dividing. When these microorganisms are deprived of glucose – the sugar molecules they use for energy – all cells stop dividing. However, when this nutrient becomes available again, some cells start dividing once more while others no longer divide but remain alive, even in batches of yeast that are genetic clones. What drives the differences in behavior between these re-dividing “quiescent” cells and never-dividing “senescent” cells has been a mystery, say study leaders N. Ezgi Wood, Ph.D., a postdoctoral fellow at UTSW, and Mike Henne, Ph.D., assistant professor of cell biology and biophysics at UTSW.

Previous studies of behavioral differences in genetically identical cells have focused on genes that decide cell fate. However, Wood, Henne, and their colleagues took a different tact: They looked at the behavior of other biomarkers associated with basic cell maintenance, such as cell cycling, stress response, intracellular communication, and nutrient signaling.

The researchers note that the role each of these factors plays in deciding cell fate is not yet clear. Learning more about the factors that prompt cells to act differently could eventually steer researchers in new directions. For example, the knowledge could be useful in helping cells uniformly respond to cancer chemotherapies or antibiotics, areas in which cells often take divergent paths.

“How two identical cells side by side take different paths is a very basic biological question – we see it from bacteria to mammalian cells,” Wood says. “Our results show that factors not traditionally associated with cell fate can, in fact, play an important role in this process, and gets us closer to answering the question of why this phenomenon takes place and how we might control it.”

To explore these questions, researchers genetically modified yeast cells so that five different protein markers associated with these maintenance tasks glowed with different colors inside the cell when they were present. They then set up an experiment in which these cells lived in a microfluidics chamber that was continuously flushed with liquid media. For two hours, this media was rich with the nutrients that these cells needed to survive and multiply, including glucose. Then, for the next 10 hours, the researchers cut off the glucose supply, starving the cells. At the end of this period, they reintroduced glucose, allowing the cells to recover. During this 16-hour cycle, a camera continuously monitored individual cells, looking for differences between those that became quiescent or senescent when glucose was available again.

When they reviewed the camera footage, researchers quickly saw that despite the cells growing in an asynchronized fashion, or at different points in their cell cycles, starvation stopped the cell cycle. A closer look showed that a protein inhibitor of the cell cycle known as Whi5 tended to collect in the nuclei of quiescent cells during starvation, while Whi5 in senescent cells disappeared altogether.

The researchers found another useful marker for separating these two populations in the nucleus-vacuole junction (NVJ), an interface that connects the nucleus to the vacuole, the small digestive organelle that cells use to sequester waste products. While quiescent cells tended to enlarge their NVJs during starvation, senescent cells did not.

Although each of these findings gave clues to which path cells would take after starvation started, none showed any predictive powers before starvation took place. But when the researchers examined Rim15, a protein that plays a key role in nutrient signaling, they found that cells with elevated Rim15 before starvation tended to become quiescent while those with lower concentrations of this protein were more likely to become senescent.

On their own, none of these factors served as an accurate predictor of cell fate. But when Wood, Henne, and their colleagues performed a statistical analysis incorporating all of them, they were able to accurately predict which cells became quiescent and which became senescent with an accuracy of nearly 90 percent before they reintroduced glucose. In fact, they say, cells seem to reach a “decision point” where it’s unlikely that they’ll change their direction about four hours into starvation.

Other UTSW researchers who contributed to this study include Piya Kositangool, Hanaa Hariri, and Ashley J. Marchand. Henne is a W.W. Caruth, Jr. Scholar in Biomedical Research and a member of the Harold C. Simmons Comprehensive Cancer Center.

This research was funded by grants from the Cancer Prevention and Research Institute of Texas (RR150058), The Welch Foundation (I-1873), National Institutes of Health NIGMS (GM119768), the Ara Parseghian Fund (APMRF2020), and UTSW Endowed Scholars Program.