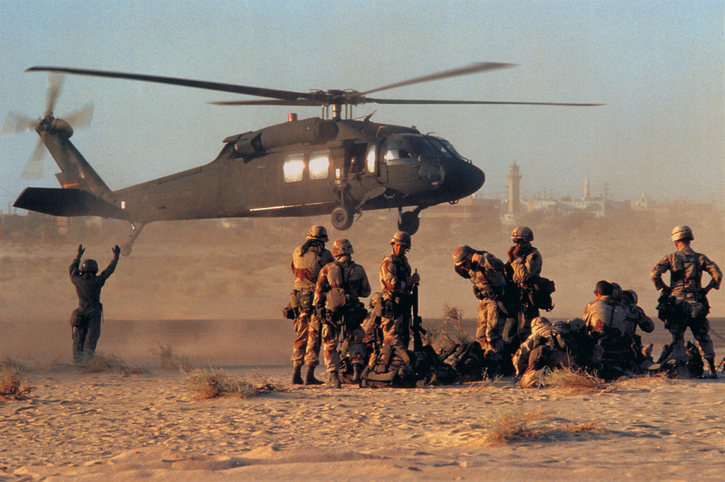 DALLAS – Feb. 18, 2021 – Inhalation of depleted uranium from exploding munitions did not lead to Gulf War illness (GWI) in veterans deployed in the 1991 Persian Gulf War, a new study co-authored by a leading researcher of the disease at UT Southwestern suggests. The findings, published today in Scientific Reports, help eliminate a long-suspected cause of GWI that has attracted international concern for three decades. 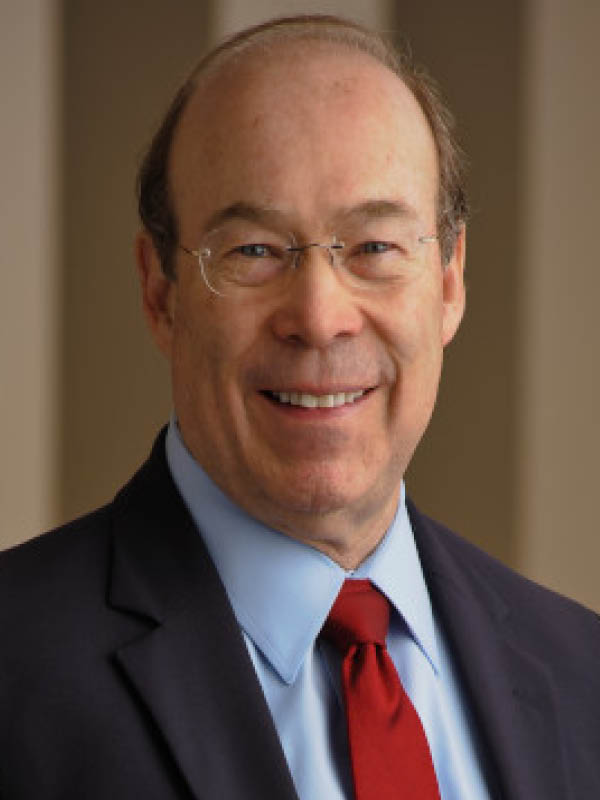 Using high-precision multicollector mass spectrometry for the first time in such a study, Robert Haley, M.D., director of the division of epidemiology at UTSW, and Randall Parrish, Ph.D., professor of isotope geology at the University of Portsmouth in England, collaborated to examine a representative sampling of veterans’ urine maintained by UT Southwestern’s Gulf War Illness Research program. Their report found no differences in secretion of uranium isotopic ratios from those meeting the standard-case definitions of GWI and control veterans without GWI. 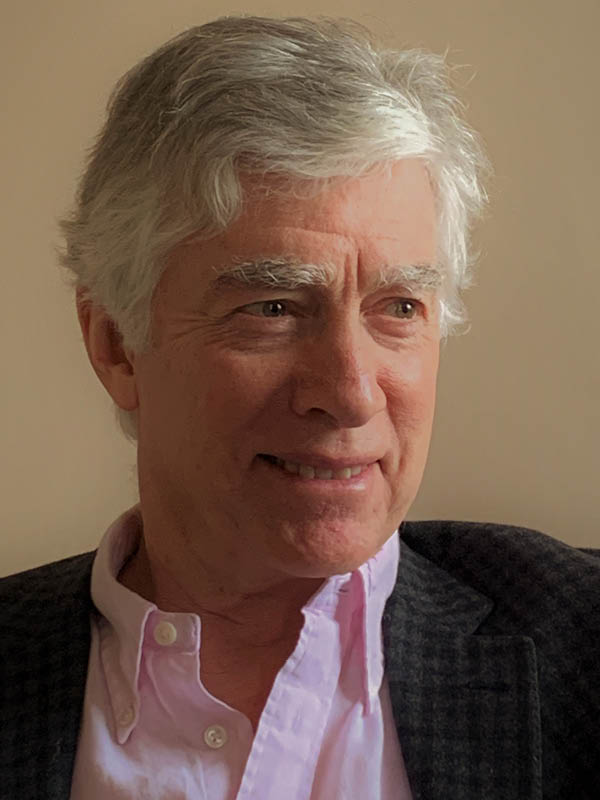 “Randy Parrish is a world expert in measuring uranium isotopes, and he had already been consulting in the U.K. for their Gulf War illness studies,” says Haley, a professor of internal medicine who has been investigating GWI for 27 years and holds the U.S. Armed Forces Veterans Distinguished Chair for Medical Research, Honoring Dr. Robert Haley, and America’s Gulf War Veterans.

“That depleted uranium is not and never was in the bodies of those who are ill at sufficient quantities to cause disease will surprise many, including sufferers who have, for 30 years, suspected depleted uranium may have contributed to their illness,” says Parrish.

Affecting about 25 percent of the approximately 700,000 U.S. and coalition military personnel deployed in the Persian Gulf War’s theater of operations, GWI is a chronic illness with symptoms that may include fatigue, fever, night sweats, memory and concentration problems, diarrhea, sexual dysfunction, and chronic body pain. The symptoms are comparable with autonomic nervous system abnormalities and dysfunction of the brain’s cholinergic system, which is associated with cognitive functions such as memory, selective attention, and emotional processing.

Since 1998, the National Academy of Medicine has released numerous Department of Veterans Affairs-supported reports on possible causes of GWI. As Gulf War veterans were exposed to hazards not experienced in previous conflicts, the extensive list of suspected culprits through the years has included the physical and psychological stresses of war, pesticide or nerve gas exposure, depleted uranium (DU) munition exposures, pyridostigmine bromide pills taken by troops to protect against nerve agents, vaccinations for in-theater infections and toxins, and exposure to downwind oil and smoke that spewed for months from hundreds of burning oil wells.

The U.S. military has used depleted uranium since the 1990s for tank armor and some munitions due to its high density that allows for it to penetrate enemy armored vehicles. DU is produced when higher-energy uranium isotopes are removed from natural uranium found in the earth’s crust to produce “enriched” uranium suitable for use in nuclear reactors. The uranium remaining is depleted of about 40 percent of its radioactivity but retains the same chemical toxicity as natural uranium. 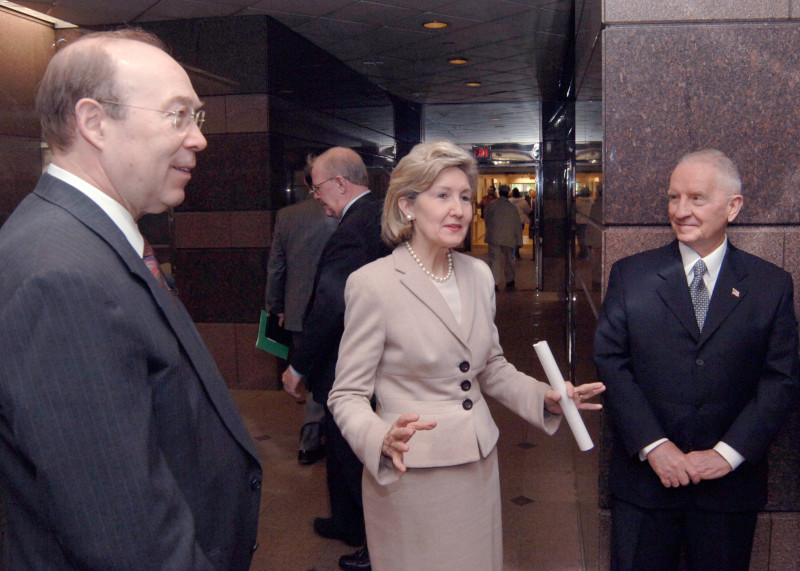 When a DU projectile penetrates a vehicle, the intense explosion releases tiny particles of DU that can be inhaled or swallowed as well as larger DU shrapnel fragments that can become embedded in muscle and soft tissue. Subsequent adverse effects are believed to result from heavy metal toxicity and alpha particle radiation from DU concentrated in the lungs, kidneys, and bone of those affected.

During the Gulf War, about 300 tons of DU munitions were fired at targets in Kuwait and southern Iraq, resulting in some friendly-fire incidents as well as secondary aerosol exposures. The Department of Veterans Affairs currently reports that some veterans of the Gulf War, Bosnia, Operation Enduring Freedom, Operation Iraqi Freedom, and Operation New Dawn may have been exposed to DU when they were in or around vehicles hit with friendly fire; near burning vehicles; close to fires involving DU munitions; or around damaged vehicles being salvaged.

Haley and Parrish undertook the study after realizing that the role of DU in GWI had never been adequately tested. Using methods developed by the British Royal Society, they calculated the level of DU to be found in urine over time after varying illness-causing levels of exposure. They found that the less sensitive sector-field mass spectrometry used to measure DU in urine in previous studies, while adequate for detecting DU in the few veterans with large fragments of retained shrapnel, would not detect the smaller amounts expected from far more common inhalation exposure or oral ingestion. The type of multicollector mass spectrometer operated by Parrish, which gave results at least 10 times more sensitive and robust than the measurements employed in previous GWI studies, could detect the lower levels expected. 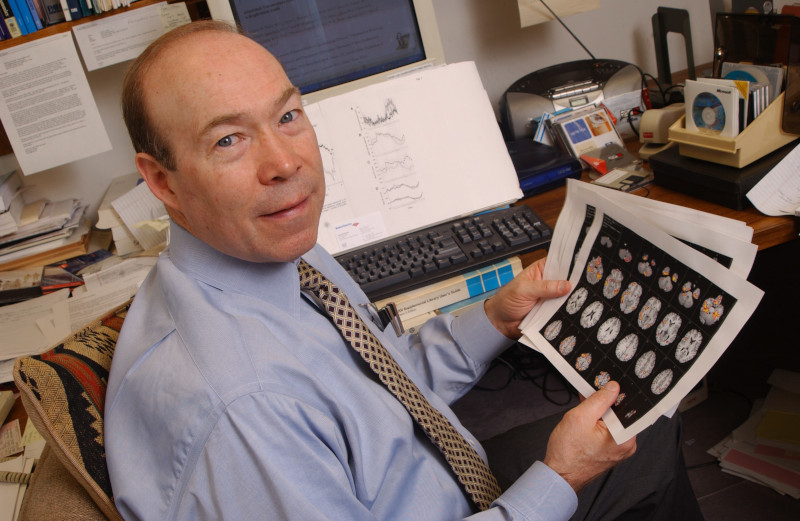 In their study Parrish tested for the lower levels of DU in 154 urine samples, including 106 taken from veterans with GWI meeting standard-case definitions and the rest comprising two control groups representing Gulf War veterans without GWI symptoms and veterans who were not deployed. The subjects, drawn from a nationally representative sample of Gulf War-era veterans, were studied in a hospital research unit where urine was collected for 24 hours in special collection bottles prewashed with nitric acid to remove any trace of natural uranium that could interfere with the DU assay.

In all samples, the scientific partners found no DU present – not in any of those with the illness, not in the control group deployed in theater, nor in those who weren’t on the battlefield, not even in the sample from a U.S. Army officer who survived a friendly-fire incident that destroyed his Bradley Fighting Vehicle, causing him to inhale the resulting hot DU-containing gases and peppering him with shrapnel that was removed months later. Given the high sensitivity of the DU assay, the representativeness of the veterans in the study and their typical patterns of GWI, the study would have found DU at the expected levels in the GWI veterans but not in the controls, if DU was the cause of GWI. Finding none for the first time strongly rejects the link.

“These findings essentially rule out a role for DU in causing GWI,” Haley says. “They also have implications for the international debate over whether DU has since been causing illness in other war theaters where DU munitions were used, since the concern for those situations was originally raised by speculation that depleted uranium caused GWI.”

Parrish adds, “This question of the link between depleted uranium and the illness has bubbled along now for nearly 30 years, but we would argue it’s time to look elsewhere. Disproving the suspected connection between this radioactive substance and GWI allows the medical community to focus more clearly on what the likely cause(s) actually are.”

The investigators believe the most likely remaining causes for GWI are widespread low-level exposure to sarin nerve gas caused by the destruction of Iraqi chemical weapons storage facilities in January 1991, possibly compounded by the use of anti-nerve agent medications and the use of pesticides to prevent insect-borne diseases in coalition forces.

The authors declare no competing interests. The original recruitment of GWI subjects and controls by Haley’s team was completed under U.S. Army Medical Research and Materiel Command grant DAMD17-01-1-0741. The epidemiologic and clinical data and urine samples analyzed for this study were collected under Indefinite Delivery Indefinite Quantity contract VA549-P-0027 and the National Institutes of Health’s National Center for Research Resources (Grant UL1RR024982-05), while the Perot Foundation in Dallas supported in part the writing of the manuscript. Parrish received departmental support and funding from the University of Portsmouth’s School of Earth and Environmental Sciences. 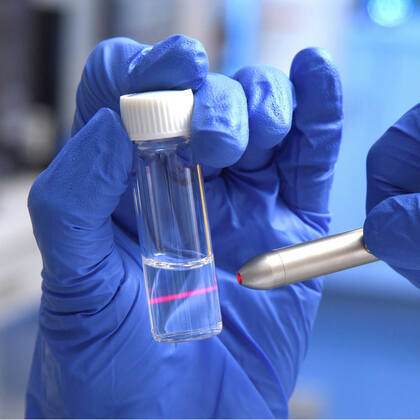