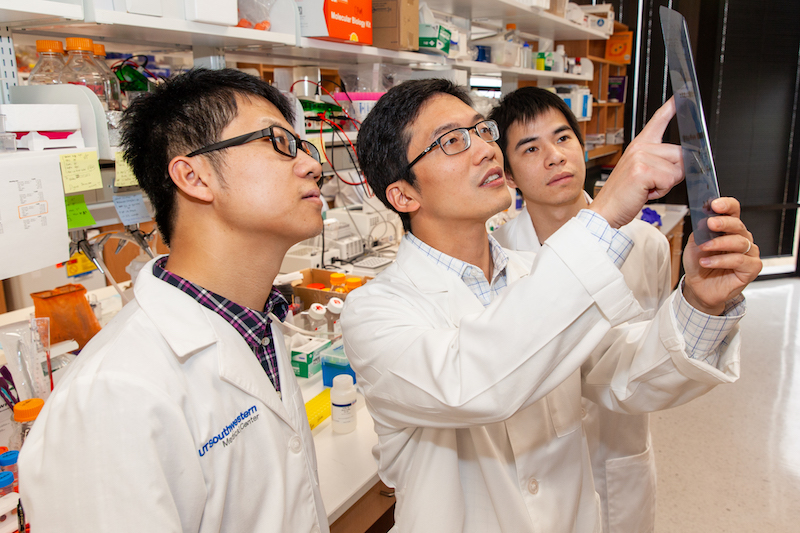 DALLAS – Jan. 16, 2020 – A UT Southwestern researcher led a team that identified a new vulnerability in kidney tumors, the 10th most common cause of cancer death in men and women.

In their investigation of the most common type of kidney cancer, called clear cell renal cell carcinoma (ccRCC), Qing Zhang, Ph.D., and his colleagues identified a possible way to treat tumors while sparing nearby healthy tissue.

Their study uncovers a mechanism by which either the loss of a protein that protects against cancer or an oxygen-poor (hypoxic) environment can promote tumor growth via the cancer cell’s oxygen-sensing pathway, he explains. Their work points to inhibiting an enzyme called TBK1, which becomes more active once the protein is lost, as a potential cancer-fighting strategy.

Because kidney cancer is often resistant to the most advanced treatments, new therapies are critically needed, says Zhang, associate professor of pathology and a corresponding author of the study published online recently by Cancer Discovery.

The American Cancer Society estimates that in 2019, kidney cell and renal pelvic cancers affected about 74,000 people in the U.S., resulting in nearly 15,000 deaths. Recently, it has been shown that treatment with one member of a drug class called hypoxia-inducible factor 2 alpha (HIF2α) inhibitors can block tumor growth in some kidney cancers. However, only a subset of tumors respond to that therapy and a significant number of patients develop resistance to it. “We need to identify additional strategies that would work alone or in combination with the HIF2α inhibitors,” Zhang says.

Previous studies had found that 70 to 80 percent of kidney cancers show a loss of function of a critical tumor suppressor gene called von Hippel Lindau (VHL). “It had previously been shown that loss of the protein product of that gene mimics the hypoxic conditions under which many solid tumors seem to thrive,” Zhang says.

Based on that knowledge, the researchers aimed to identify enzymes with potential therapeutic action against kidney cancer with VHL protein loss.

“We identified one particular enzyme, called TBK1 (TANK-binding kinase 1), that is highly activated in kidney cancer patients with VHL loss,” says Zhang of the study that began while he was at the University of North Carolina at Chapel Hill and continued after his arrival at UT Southwestern last year.

TBK1 is an enzyme best known for its role in innate immunity, where it is important in the STING cellular sensing pathway that detects viral invaders. To study the enzyme’s activity in the context of cancer, the scientists conducted a series of experiments on several VHL protein-deficient ccRCC cell lines to see what would happen when TBK1 activity was reduced. Specifically, they used CRISPR gene-editing technology to remove the gene that makes TBK1, pharmacologically reduced the enzyme’s activity, and used small molecules to degrade TBK1 protein.

In comparison experiments of cancerous and healthy cells that used small molecules to block TBK1 activity, the researchers found the strategy inhibited tumor growth in VHL-deficient ccRCC cells while leaving healthy cells with normal VHL protein levels unaffected. “That indicates this strategy holds the potential for selective lethality, killing the cancer cells without harming the healthy ones,” says Zhang, a Cancer Prevention and Research Institute of Texas (CPRIT) Scholar.

Because hypoxia is thought to occur in most tumors, the study may have broader implications. The researchers found that hypoxia can increase TBK1 activity through the same mechanism as VHL loss, i.e., through the cell’s oxygen-sensing pathway, he says. “We believe targeting and manipulating TBK1 activity – possibly with drugs already under investigation for other cancers – may benefit patients with other forms of cancer,” he says.

TBK1 is central to cell signaling in the innate immune system’s antiviral response, so the researchers wanted to learn whether the protein’s immune system activity was connected to the effects they observed in kidney cancer. To do that, they studied TBK1-depleted cancer cells to see if the proteins created by genes governing the cell’s innate immune response pathway were affected. They were not. That finding indicated that TBK1’s novel role in cancer is distinct from the enzyme’s function in the immune system.

Next steps include trying to optimize the efficiency of the small molecules used in this study and testing them in ccRCC tumor cells grown in mice, Zhang says. Additionally, recent studies from other laboratories indicated depletion of TBK1 can boost the effectiveness of a class of anti-cancer drugs called immune checkpoint inhibitors. So that is another area of interest for future studies, he adds.

“We propose that TBK1 is a promising potential therapeutic target for kidney cancer,” Zhang says.