New findings on mechanism for intestinal inflammation could offer new targets for treating ulcerative colitis, Crohn’s disease, and other conditions

DALLAS – May 18, 2020 – Ulcerative colitis (UC) and Crohn’s disease are marked by runaway inflammation in the gut that permanently damages the intestines, but why inflammation becomes excessive in patients with these conditions is unclear. A new study led by researchers from UT Southwestern, published today in Nature Immunology, offers clues to the mechanism behind this phenomenon, providing several new potential targets to treat these often devastating conditions.

About 1.6 million Americans suffer from these and other inflammatory bowel diseases (IBDs). While a variety of medications are used to treat these conditions, including corticosteroids, immunomodulators, and biologics, up to a third of patients don’t respond to these drugs, and the medications often lose efficacy over time for those who do respond, says Venuprasad Poojary, Ph.D., associate professor of internal medicine and immunology at UTSW. 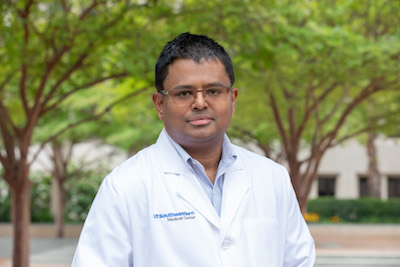 New medications are urgently needed to help patients avoid invasive treatments such as surgeries. But efforts to develop pharmaceuticals for these conditions have been stymied because the mechanisms behind chronic gastrointestinal inflammation aren’t well understood, Poojary says.

To help flesh out this mechanism, Poojary and his colleagues started by focusing on a single gene called Cyld, which previous studies have shown is often mutated in patients with various IBDs. When the researchers infected healthy mice and those whose Cyld gene had been deleted with Citrobacter rodentium, a bacterium that causes intestinal inflammation in rodents, those missing the Cyld gene showed much more severe colonic inflammation and damage to the intestinal lining. Further experiments showed that the protein generated by Cyld seems to join forces with another protein known as nod like receptor protein 6 (NLRP6), physically interacting with it during an inflammatory response.

Surprisingly, Poojary explains, further investigation showed that this interaction appears to be mediated by ubiquitin, a protein that usually flags other proteins for degradation. But here, ubiquitin chains appear to facilitate an interaction with apoptosis-associated speck like protein (ASC) and caspase 1, proteins that join together with NLRP6 to form a unit called an inflammasome.

In “wild type” mice with working Cyld genes, the Cyld protein works to cut ubiquitin chains, preventing NLPR6, ASC, and caspase 1 from joining together. But when the Cyld gene was deleted, the ubiquitin chains persisted, allowing the inflammasome to form. Work from Poojary’s lab and others shows that this inflammasome helps to activate a key inflammatory molecule called IL-18, spurring inflammation in the intestines. Importantly, when he and his colleagues analyzed Cyld expression in IBD patients, their results indicated that about two-thirds of patients showed an abnormally low amount of the Cyld protein.

“This correlates perfectly with what we found in the mice,” Poojary explains. “Without enough Cyld, inflammation can spiral out of control, leading to too much IL-18.”

Poojary adds that this new information about how excessive inflammation might arise in IBD patients could lead to new ways to fight IBD – and any one of these players that work together to generate this inflammasome is a potential target to reduce intestinal inflammation in these patients.

Other UTSW scientists who participated in this study include Sandip Mukherjee, Ritesh Kumar, and Elviche Lenou Tsakem.

This research was supported by grants from the National Institutes of Health (R01-DK115668-01), Cancer Prevention and Research Institute of Texas (RP160577), and the Baylor Scott & White Charles A. Sammons Cancer Center and BSWRI-TGEN collaborative grants.