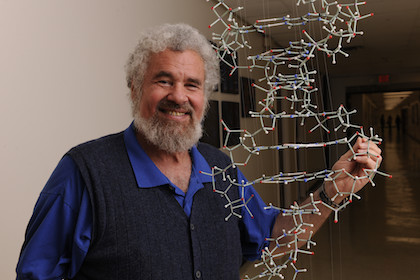 DALLAS – Aug. 5, 2019 – Dr. Woodring Erik Wright, Professor of Cell Biology, passionate educator, and scientific trailblazer in the fight against aging and cancer, died on Aug. 2. He was 70.

A faculty member since 1978, Dr. Wright dedicated decades of research to studying the relationships between aging and cancer and focused on the role of the end caps of chromosomal DNA, called telomeres, in these processes.

Together with longtime collaborator Dr. Jerry Shay, Dr. Wright explored molecular mechanisms that regulate telomere shortening and telomerase activity. The laboratory partners leveraged these mechanistic insights into studies on how telomere shortening contributes to human aging and pursued a variety of approaches to transform their insights to develop treatments for cancer and age-related diseases.

“Woody and I collaborated for over 30 years and published many highly cited papers together. His two most cited papers were both published in Science (1994 and 1998) and have been referred to by other authors 5,700 and 3,450 times, respectively,” said Dr. Shay, Professor of Cell Biology, who holds The Southland Financial Corporation Distinguished Chair in Geriatrics. “Woody was exceptionally good at developing new methods and coming up with insightful ideas on how to advance a project. We worked well together and complemented each other’s strengths. He will be missed by me and all his former students and postdoctoral trainees.”

In addition to being a distinguished researcher with UT Southwestern’s Harold C. Simmons Comprehensive Cancer Center, Dr. Wright had heroically waged a 13-year battle with multiple myeloma, a type of rare blood cancer, at the Cancer Center. In the midst of his success in illuminating the role of telomeres, Dr. Wright was diagnosed in 2006 with multiple myeloma and volunteered to take part in one of the nation’s first clinical trials of CAR-T therapy. “I don’t know if it’s because of what I went through or if it’s a normal part of aging, but I have a strong desire to give back,” he had explained in a 2018 interview.

Dr. Wright garnered national and international attention to his work through more than 140 seminars and lectures at major universities and meetings throughout the U.S. and the world, more than 320 published articles, reviews, and book chapters, and 27 patents related to methods for the diagnosis, treatment, and analysis of telomere length, telomerase activity, and other anti-cancer therapies.

Dr. Wright also was a committed and passionate educator. He mentored more than 35 graduate students and 70 postdoctoral fellows during his long and distinguished career. His excellence in the classroom was recognized by Outstanding Teacher Awards in 1993, 1994, 1999, 2008, and 2012. More than four decades of former medical students will remember the songs he wrote and performed to explain topics he was lecturing on in medical histology.

Funeral arrangements are being made with Wade Family Funeral Home in Arlington: 4140 W. Pioneer Parkway, Arlington, TX 76013. Visitation will be held 6 to 8 p.m. Wednesday, Aug. 7. A memorial service begins at 4 p.m. Thursday, Aug. 8.