DALLAS – April 24, 2019 – Amid growing concern about pathogens becoming more drug-resistant worldwide – and emerging new pathogens that have no current treatment – UT Southwestern has been selected to lead a five-year investigation into a promising new approach for controlling infections funded by a grant of up to $37 million.

The National Institutes of Health (NIH)-funded program will be headed by Dr. Beth Levine, Director of UT Southwestern’s Center for Autophagy Research and a Professor of Internal Medicine and Microbiology. She will serve as Program Director over five separate research projects at UT Southwestern and across the country – all focused on the potential to exploit a cellular process known as autophagy to destroy invading bacteria and viruses. 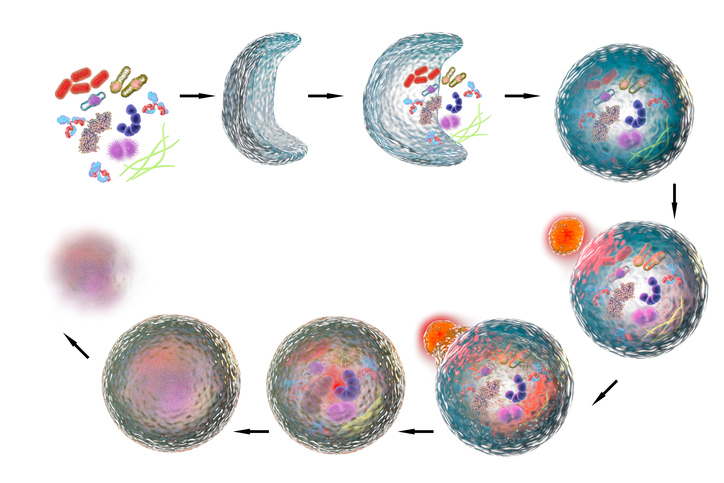 “The process of autophagy takes place inside all human cells and is used to break down damaged parts of the cell,” explained Dr. Levine, an internationally recognized expert in the field and a Howard Hughes Medical Institute Investigator who holds the Charles Cameron Sprague Distinguished Chair in Biomedical Science. “Since the late 1990s, there has been a growing body of research showing that cells can also use autophagy to destroy pathogenic invaders and to regulate host immune responses to infectious diseases.”

“If we can find ways to enhance autophagy in our cells, this could result in new treatments that would harness the body’s own defenses to help fight infections,” she added.

“During autophagy, the target to be destroyed is encased in a double-membrane compartment inside the cell called an autophagosome, which then merges with other compartments containing enzymes and acids to degrade the target,” said Dr. Michael Shiloh, Associate Professor of Internal Medicine and Microbiology, who will assist Dr. Levine as the program’s Associate Director.

“Maximizing this natural defense could result in treatments effective against a broad range of pathogens – even before the cause of an illness is identified,” said Dr. Shiloh, who holds the Professorship in Infectious Diseases, in honor of James P. Luby, M.D. “That would make it a vital tool for combating a new outbreak or an act of bioterrorism requiring rapid response. Also, enhancing autophagy could kill infectious organisms that are resistant to traditional antibiotics.”

Under the grant, awarded March 14, UT Southwestern and five other research sites will work as a Center of Excellence for Translational Research supported by the National Institute of Allergy and Infectious Diseases.

“The Center has been charged with investigating possible treatments for emerging and reemerging infectious diseases, in particular so-called ‘priority pathogens’ that are drug-resistant, have no treatment, or could be used by bioterrorists,” Dr. Shiloh said. 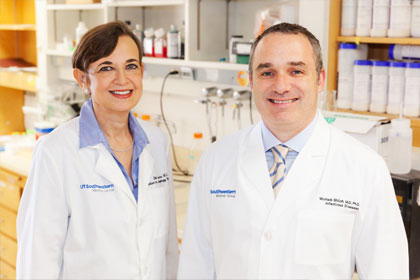 Dr. Beth Levine, assisted by Dr. Michael Shiloh, will investigate how to use a cellular recycling process called autophagy to improve defenses against viruses and tuberculosis, respectively, as part of a nationally funded effort.

As co-leader of one of the projects, Dr. Shiloh will investigate using autophagy to treat tuberculosis. This disease killed 1.6 million people worldwide in 2017 and has developed significant multidrug resistance, according to the World Health Organization, or WHO.

Dr. Levine will lead a different project focused on how to ramp up autophagy within the body in order to augment host defenses against West Nile and other mosquito-borne viruses. Last year, Dr. Levine’s group published a report in Nature showing that genetically engineered mice with increased autophagy live longer and healthier lives. These findings raise the possibility that pharmacological strategies to increase autophagy, including in the setting of infectious diseases, may be well tolerated.

The new NIH grant (No. AI142784) follows a similar five-year award funded in 2013 that UT Southwestern was involved in, although that previous grant was managed by another institution. Research conducted with the earlier funding generated several patents, licensing agreements, and promising compounds that can potentially be used to develop autophagy-inducing anti-infective agents, Dr. Levine said.

Other sites funded with the new grant include the Broad Institute in Cambridge; Massachusetts General Hospital and Harvard Medical School in Boston; VIR Biotechnology Inc. in San Francisco; Washington University School of Medicine in St. Louis; and The Scripps Research Institute in La Jolla, Calif.