DALLAS – April 30, 2019 – Scientists at the Children’s Medical Center Research Institute at UT Southwestern (CRI) are using a new approach to pinpoint the causes of rare genetic diseases in children and identify treatment options faster than with traditional methods. The new approach combines DNA sequencing and a chemical analysis called metabolomics to identify mutant genes that cause defective metabolic pathways in patients.

“We hope our new technique will increase the speed with which we can pinpoint the defective gene in patients evaluated in our clinics at Children’s Health,” said Dr. Ralph DeBerardinis, Professor at CRI and of Pediatrics at UT Southwestern, where he is Chief of the Division of Pediatric Genetics and Metabolism and holds the Joel B. Steinberg, M.D. Chair in Pediatrics and is a Sowell Family Scholar in Medical Research. He also directs CRI’s Genetic and Metabolic Disease Program (GMDP). 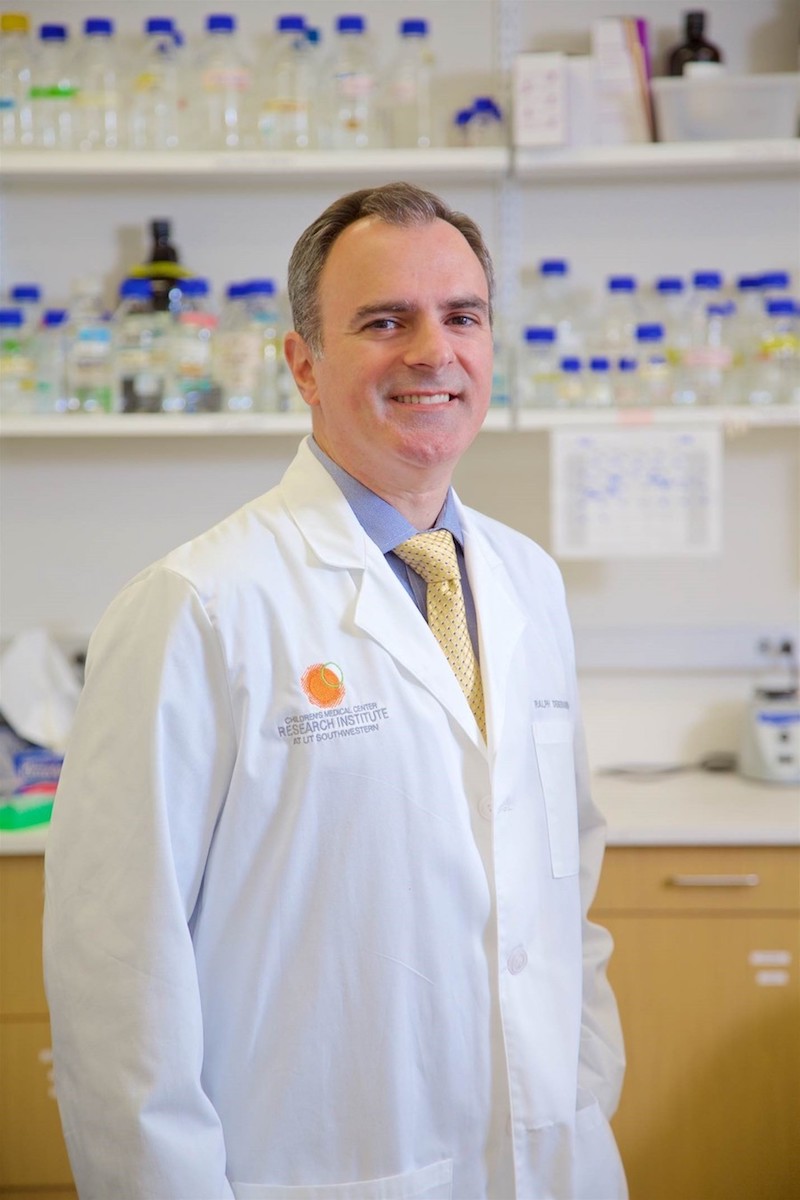 “Pinpointing the mutation allows us to provide useful information to the family about the disease and its risk to other family members. In some cases, the information either points to an existing therapy or helps us to devise new ones,” Dr. DeBerardinis added.

Diseases with a genetic basis account for a large number of illnesses and mortality in children and result in about 25 percent of pediatric hospital admissions. The largest subset of these genetic diseases are known as inborn errors of metabolism (IEMs). Although individually these diseases are rare, collectively they affect a disproportionate number of children, he said. IEMs are caused by defects in genes that help the body metabolize or break down the sugars, proteins, and fats in food. Defective metabolism can lead to chemical imbalances that can cause death or permanent disability in children, unless identified and treated at a young age.

Encouragingly, many IEMs are treatable through dietary modifications and medical therapy once the genetic basis of the disease has been identified. A handful of IEMs are diagnosed through newborn screening, but the majority are diagnosed only after a child becomes ill. Because these diseases are so rare, it can take months or even years to establish the correct diagnosis, and the process often involves invasive procedures like muscle or liver biopsies.

“IEMs are traditionally hard to identify,” Dr. DeBerardinis said. “Many of these diseases have overlapping symptoms, so even if you suspect an IEM, it is often difficult to pinpoint the problem. There are over 400 known IEMs and several thousand genes involved in human metabolism. Identifying the mutated gene in a child with an IEM – particularly a new or recently discovered disease – is like hunting for a needle in a haystack.”

In the study, published in Cell Reports today, researchers identified the gene responsible for a rare IEM causing abnormal brain development, seizures, and severe metabolic acidosis. To find the gene, they used a combination of DNA sequencing and metabolomics, a technique that can detect hundreds of small chemical compounds in the blood. Researchers compared the level of each metabolite found in the patients to healthy subjects using a technique called untargeted metabolomic profiling. This technique allowed researchers to detect 20 times as many metabolites in the blood as would a conventional metabolic screen. This approach provided researchers with a granular view of the metabolic alterations in the patient.

Researchers then used advanced DNA sequencing techniques to look for mutations among the nearly 20,000 human genes. Next, they combined the list of metabolic alterations and the list of mutated genes to determine which mutation could explain the metabolic differences present in the patient.

“Performing metabolomics in parallel with DNA studies makes it possible to pinpoint disease-causing mutations much faster than the DNA studies alone,” said Dr. Min Ni, lead author of the study and Assistant Professor at CRI and of Pediatrics at UT Southwestern. “In this case, it helped us determine that the patient had a genetic defect in one enzyme known as LIPT1. We were able to confirm our new screening technique worked by using cultured cells from the patient and a mouse model to show that the mutation we identified in the patient caused the metabolic disturbances and prevented normal development.”

Dr. DeBerardinis credits the unique setup of the GMDP for the discovery. “With support from Children’s Health and UT Southwestern, we’ve tripled the size of our clinical group and built a research program to handle human genomics and metabolomics data. Our scientists and doctors work side by side to evaluate patients, learn about their diseases, find new mutations, and think creatively about developing better treatments. Seeing patients in the clinic keeps our research focused and ensures we are asking the right questions. In the past five years, we have identified new disease genes, provided accurate diagnostic information to families, and, in a few cases, helped patients find better treatments tailored to their mutations. We are very excited about what we will learn in the next few years.”

A practicing physician, Dr. DeBerardinis is a Howard Hughes Medical Institute (HHMI) Investigator and also affiliated with the Eugene McDermott Center for Human Growth and Development and the Harold C. Simmons Comprehensive Cancer Center, both at UT Southwestern. He is also a Robert L. Moody, Sr. Faculty Scholar.

The National Institutes of Health, the HHMI, The Welch Foundation, and donors to the Children’s Medical Center Foundation supported the research.