One-third of cancer patients use complementary and alternative medicine

DALLAS – April 11, 2019 – A stunning one-third of people with a cancer diagnosis use complementary and alternative medicines such as meditation, yoga, acupuncture, herbal medicine, and supplements.

UT Southwestern Medical Center’s Dr. Nina Sanford made the findings that’s now drawing renewed attention to habits she said cancer patients must disclose during treatment. Dr. Sanford is an Assistant Professor of Radiation Oncology who specializes in and treats cancers of the gastrointestinal tract.

Herbal supplements were the most common alternative medicine and chiropractic, or osteopathic manipulation, was the second most common, according to Dr. Sanford’s analysis of data from the Centers for Disease Control and Prevention’s National Health Interview Survey. Her findings were published in the journal JAMA Oncology.

“Younger patients are more likely to use complementary and alternative medicines and women were more likely to, but I would have thought more people would tell their doctors,” Dr. Sanford said, referring to the finding that 29 percent of people who use complementary and alternative medicine did not tell their physicians. Many survey respondents said they did not say anything because their doctors did not ask, or they did not think their doctors needed to know.

Dr. Sanford and other cancer specialists agree this is concerning, especially in the case of herbal supplements.

“You don’t know what’s in them,” Dr. Sanford said. “Some of these supplements are kind of a mishmash of different things. Unless we know what’s in them, I would recommend patients avoid using them during radiation because there’s likely not data on certain supplements, which could interfere with treatment. With radiation specifically, there is concern that very high levels of antioxidants could make radiation less effective.”

Dr. David Gerber, a lung cancer specialist and a Professor of Internal Medicine and Population and Data Sciences at UTSW, said physicians need to know if their patients use herbal supplements because they can completely throw off traditional cancer treatments.

Nancy Myers wanted to use supplements during her 2015-2017 cancer treatments, but she ran it by her doctors first.

“I would ask the physician, ‘Could I?’ and everyone said, ‘No, we don’t know how that interacts with your conventional medicine,’ so I respected that,” the 47-year-old mother of four said. Only after treatment did she start taking turmeric, omega-3, vitamin D, and vitamin B6.

“I have plenty of friends in this cancer journey who I’ve met who take supplements. A lady I met recently takes 75 supplements a day. It takes her two hours to package her supplements every week,” she said.

Ms. Myers said every person in her cancer support group uses some kind of alternative medicine. In addition to supplements, she practices meditation and yoga with guidance from a smartphone app.

“It’s what we can control. We can’t control the whole cancer,” she said. “It helps because it takes your mind off just thinking about it.” 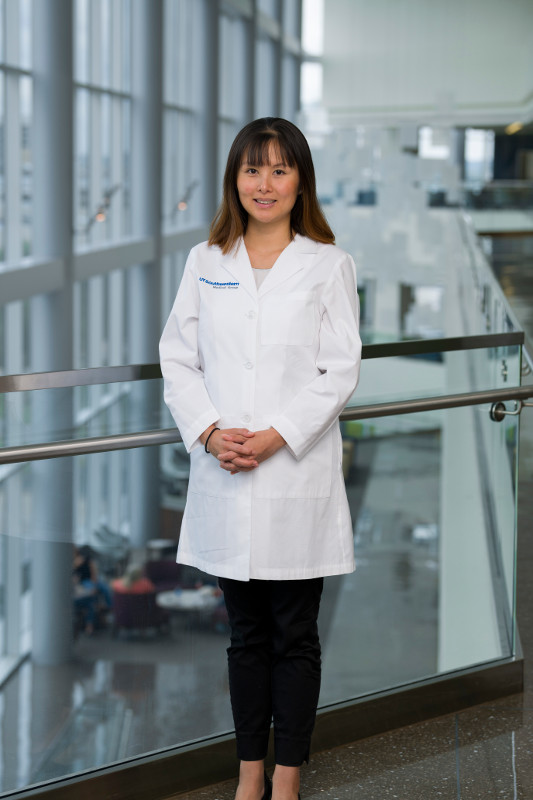 She said she knows of some people with cancer who use only alternative medicine – and no traditional medical treatments. Dr. Sanford said this is a dangerous approach that could be fatal. The most famous case of this was Apple founder Steve Jobs, who reportedly used special diets, acupuncture, and other alternatives after receiving a diagnosis of pancreatic cancer. He turned to traditional medicine late in his battle with cancer and died in 2011.

While doctors are highly cautious about the use of herbs and other supplements during treatment, they are much more open to meditation and yoga as practices that can help patients cope with the shock of a cancer diagnosis and the stress of chemotherapy, radiation, and surgery.

Belindy Sarembock, 53, of Dallas, said she practiced yoga during her treatments for breast cancer. She started the classes with skepticism and quickly became convinced of the benefits.

“I was one who would have laughed at yoga before breast cancer, but now it just helps me so much,” she said. “It’s just so relaxing, I just feel so good after I leave. It’s just so peaceful. For your body, I can’t think of anything better than that.”

She said she had neuropathy or nerve damage from chemotherapy, and yoga almost immediately took the pain away.

“I couldn’t get onto my toes. After the second time of going to yoga, I was able to go onto my toes,” she said. “I wish I would have known about the yoga earlier. It was just such a benefit and helped me so much. I highly recommend it to anyone.”