DALLAS – April 26, 2017 – If not for a heart transplant, Drew Wilson would have been dead last fall.

Instead, the 67-year-old Garland man spent September driving a Jaguar through the English countryside with his wife Bonnie – a trip he won for being one of the British automaker’s most knowledgeable parts department employees. The couple loved the vacation, which included a banquet at Shakespeare’s Globe Theatre, a tour of Windsor Castle, and tickets to “The Phantom of the Opera.” “Just being alive is pretty good,” said Mr. Wilson, whose dream trip never would have happened without the lifesaving heart transplant he received in 2010 at UT Southwestern Medical Center.

Since the world’s first successful human organ transplant – a kidney – in 1954, post-transplant survival rates in cases such as Mr. Wilson’s have soared.

In the early days, for a patient to live a year was considered a success, said Dr. Malcolm MacConmara, an Assistant Professor of Surgery at UT Southwestern who specializes in liver and kidney transplants. Today, patients can expect their new kidney to survive at least 10 to 15 years, or longer, he said.

Almost all – 99 percent – of Americans receiving a kidney from a living donor survive at least a year now, according to the United Network for Organ Sharing (UNOS), the nonprofit organization that manages the country’s organ transplant system. More than 91 percent live at least five years. At 10 years, 71 percent are alive.

Kidney transplants today rank second only to lung transplants in the number of such procedures done at UT Southwestern, with 49 performed in 2016.

In heart transplants, UTSW’s 3-year survival rates exceed the national average, according to the Scientific Registry of Transplant Recipients, which provides statistics on organ procurement and transplantation. More than 600 heart transplants have been completed at UTSW since that program began in 1988.

The liver transplant program – UTSW’s newest – has grown to more than 250 transplants completed since its founding in 2007. It also outpaces the national 3-year patient survival rate.

A new lease on life

Crystal Thomas, who received a kidney transplant in 2013 at UT Southwestern, has since given birth to two daughters. Mrs. Thomas, her husband, and the girls – ages 7 weeks and almost 2 years old – now live in Seattle.

Without the transplant, the Fort Worth native said she would not have been able to endure a pregnancy. “Being a mom is the best job ever, and I’m so glad that I was able to have a transplant and have two healthy babies. Crystal Thomas and her children, Landry and Lily

“It makes me so grateful for my kidney donor,” she said, adding that she named her firstborn after the girl who died and donated the organ.

Four months after Nicole Romine, of Justin, Texas, gave birth to her son in 2014, she developed acute liver failure and was put on a fast track for a transplant at UTSW. The then-25-year-old was nauseous, and her skin and eyes had turned yellow. She was told her immune system was attacking her liver.

While waiting for a donated liver, her condition became dire.

“I was actually hours away from being put on life support because I was so weak. I would probably have died soon after that,” Mrs. Romine said.

“I almost wasn’t there for my son. It’s hard for me to think about.”

Liver transplants like Mrs. Romine’s are complicated procedures, said Dr. Jorge Marrero, Professor of Internal Medicine and Medical Director of Liver Transplantation at UT Southwestern. “It’s a big operation. Once the liver starts to fail, the blood’s ability to clot declines, among other problems. It’s really hard to manage.”

With a failing liver, there are no alternatives – no dialysis as for kidney patients. Nicole Romine and her son, Aaron

“Once the liver starts to fail, it’s transplant or death,” said Dr. Marrero, who added that for the past 20 years, UT Southwestern has led a multisite effort funded by the National Institutes of Health to study acute liver failure.

However, for patients lucky enough to get a donated liver in time, organ rejection is not as big of a concern, so they need less of the immune system-suppressing drugs that can create side effects, said Dr. Marrero.

In fact, the liver is so accommodating to transplantation that it can increase or decrease in size to fit the space in its recipient’s body. It can even regenerate new cells to replace damaged ones, he said.

While getting a kidney transplant isn’t usually a matter of life or death – since treatment with dialysis takes over a failing kidney’s job by cleansing the blood – a transplant can extend and improve life.

“Dialysis is quite tiring, especially for the long-term dialysis patients,” said Dr. MacConmara. The patient typically spends three to four hours, three days a week, hooked up to a dialysis machine. Ryan Havens, a 25-year-old from Dallas, remembers those days. Before his 2015 transplant, performed by Dr. MacConmara, he went three times a week for treatments.

“It sucked. It was just draining,” said Mr. Havens, who still has raised, knotty vessels in his left forearm from where the dialysis machine was attached. “I’d do dialysis and I’d just lay down and go to sleep because I was so tired.”

The experience changed the course of Mr. Havens’ life. Before the transplant, he was studying to become a software engineer. Today, he is training to be a nurse, and hopes to eventually specialize as an audiologist.

“I have a personal connection to it,” he said of his nursing classwork. “I just feel a lot more motivated.”

The transplant also brought Mr. Havens closer to his dad, who donated the kidney.

Lung transplant patients have the lowest 5- and 10-year survival rates, according to UNOS. “The lungs are a very difficult organ to transplant because they’re exposed to the environment constantly as we breathe,” explained Dr. Steves Ring, Professor of Cardiovascular and Thoracic Surgery. Dr. Ring developed the heart transplant program at UT Southwestern in 1988, then the lung transplant program two years later.

Lung patients also must take higher doses of immunosuppressant drugs, which make them more susceptible to infections, he said.

Still, lung recipients are the transplant patients who report the greatest increase in health-related quality of life six months after transplant, according to a 2007 study published in Transplantation Reviews. “They’re not having to carry oxygen around with them,” explained Dr. Ring. Jonathan Mahony, 43, who received two new lungs at UT Southwestern in April 2016, is doing very well. Before his transplant, the Kansas man had spent eight years growing progressively more disabled due to pulmonary hypertension, or high blood pressure in the pulmonary arteries that carry blood from the heart to the lungs.

As his condition worsened, Mr. Mahony’s Kansas doctors suggested he go to UT Southwestern for a lung transplant.

A sales director with an MBA, Mr. Mahony traveled the world before his illness – in fact, he first noticed his problem when he developed shortness of breath and swelling in his legs on the way back from India.

But it wasn’t the traveling he missed during his long illness.

The father of three young children regrets that he wasn’t there much for his youngest, an 8-year-old daughter.

A friend asked Mr. Mahony and his wife if they plan to take a trip now that he is better. “I said, ‘No, we just want to do things with the kids.’ ”

Mr. Mahony said he is “forever grateful” to the nurses, doctors, and physical, occupational, and speech therapists who worked to help him recover. Without them, he said, “I would not be in a position to live the life we always dreamed about as a family.”

A stronger focus on family is one of the common threads running through transplant stories.

A heart for his family With the extra 28 years of life he has been given so far, Mr. Thornton saw his daughter graduate from UT Austin and earn a law degree from New York University. His son graduated from Texas Tech University and became an electrical engineer. He has four grandchildren, ages 2 to 13.

“The biggest highlight has been being in a happy marriage,” said Mr. Thornton, who remarried in 1995 after his first marriage collapsed. “I had been working too much and not spending enough time with the family – just focusing on the wrong thing,” he said.

“I thank God that I got a second chance. I really hadn’t done real well with the first chance.”

Now, Mr. Thornton said, “I think my heart will go to the end.” 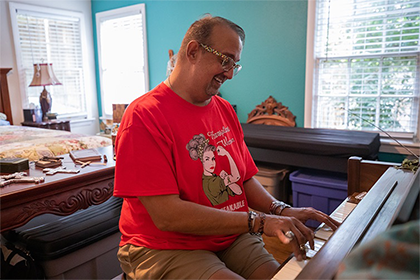 Less than three weeks after getting on an organ transplant list for HIV-positive patients, John Welch got the call. A liver was available from a deceased donor, and it was an excellent match. 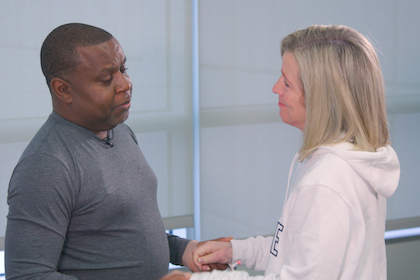 A day earlier, a severely ill Nathaniel Jones received a healthy kidney from Sarah Schecter, a principal at his children’s school. 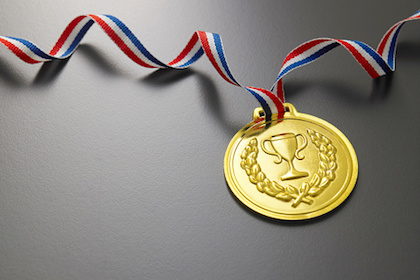 Competing in the World Transplant Games in Newcastle, England, as part of Team USA, Genie Kilpatrick won a gold medal in women’s tennis.