The method, created in conjunction with scientists at the University of Chicago and published this month in Nature, could lead to new insights into how proteins work, said senior author Dr. Rama Ranganathan, Director of the Cecil H. and Ida Green Comprehensive Center for Molecular, Computational, and Systems Biology at UT Southwestern. 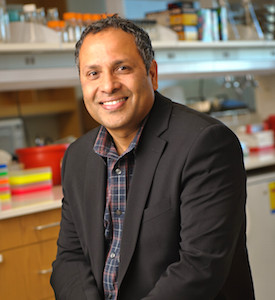 “Proteins carry out the basic reactions in cells that are necessary for life: They bind to other molecules, catalyze chemical reactions, and transmit signals within the cell,” said Dr. Ranganathan, also Professor of Biophysics and Pharmacology. “These actions come from their internal mechanics; that is, from the coordinated motions of the network of amino acids that make up the protein.”

Often, Dr Ranganathan said, the motions that underlie protein function are subtle and happen on time scales ranging from trillionths of a second to many seconds.

“So far, we have had no direct way of ‘seeing’ the motions of amino acids over this range and with atomic precision, which has limited our ability to understand, engineer, and control proteins,” he said.

The new method, which the researchers call EF-X (electric field-stimulated X-ray crystallography), is aimed at stimulating motions within proteins and visualizing those motions in real time at atomic resolution, he said. This approach makes it possible to create video-like images of proteins in action – a goal of future research, he explained.

The method involves subjecting proteins to large electric fields of about 1 million volts per centimeter and simultaneously reading out the effects with X-ray crystallography, he said. The researchers’ experiments showed proteins can sustain these intense electric fields, and further that the imaging method can expose the pattern of shape changes associated with a protein’s function.

“This is not the first report of seeing atomic motions in proteins, but previous reports were specialized for particular proteins and particular kinds of motions,” said Dr. Ranganathan, who holds the Cecil H. and Ida M. Green Chair in Biomedical Science. “Our work is the first to open up the investigation to potentially all possible motions, and for any protein that can be crystallized. It changes what we can learn.” 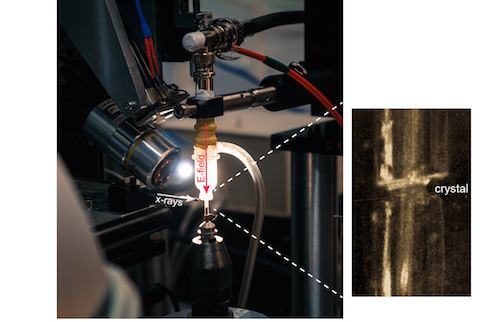 A new technique to watch proteins in action involves applying large voltage pulses to protein crystals simultaneously with X-ray pulses. At right is a close-up view of a crystal sandwiched between electrodes that deliver the voltage.

Ultimately, this work could explain how proteins work in both normal and disease states, with implications in protein engineering and drug discovery. An immediate goal is to make the method simple enough for other researchers to use, he added.

The idea for this imaging method began over 10 years ago, Dr. Ranganathan said, but assembling the perfect lab team made it a reality. Former UTSW postdoctoral researcher and lead author Dr. Doeke Hekstra and former UT Southwestern graduate student Dr. K. Ian White made the critical advances. Dr. Hekstra is now an Assistant Professor at Harvard University and Dr. White is a postdoc at Stanford University.

“I think this work has opened a new door to understanding protein function. It is already capable of being used broadly for many very important problems in biology and medicine. But like any new method, there is room for many improvements that will come from both us and others. The first step will be to create a way for other scientists to use this method for themselves,” Dr. Ranganathan said.

Dr. Michael Socolich, a research scientist in the Green Center, contributed to the study as did scientists at the University of Chicago. Some of the research was done at the Argonne National Laboratory, a U.S. government science resource run by the University of Chicago and at the Stanford Synchrotron Radiation Lightsource (SSRI) as well as at the UT Southwestern Structural Biology Laboratory.