DALLAS – October 3, 2016 – A scientific blueprint to end tobacco cravings may be on the way after researchers crystallized a protein that holds answers to how nicotine addiction occurs in the brain.

The breakthrough at the Peter O’Donnell Jr. Brain Institute comes after decades of failed attempts to crystallize and determine the 3D structure of a protein that scientists expect will help them develop new treatments by understanding nicotine’s molecular effects.

“It’s going to require a huge team of people and a pharmaceutical company to study the protein and develop the drugs, but I think this is the first major stepping stone to making that happen,” said Dr. Ryan Hibbs, Assistant Professor of Neuroscience and Biophysics with the O’Donnell Brain Institute at UT Southwestern Medical Center, who co-authored the findings published in Nature. 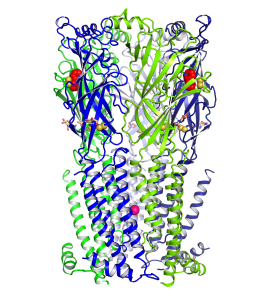 Researchers at the Peter O’Donnell Jr. Brain Institute developed this illustration of the nicotinic receptor based on a structure determined by x-ray crystallography. The ability to grow crystals of the receptor after decades of research is a breakthrough that scientists expect will help them develop new treatments by understanding nicotine’s molecular effects. Image courtesy of the Hibbs Lab.

The protein, called the α4β2 (alpha-4-beta-2) nicotinic receptor, sits on nerve cells in the brain. Nicotine binds to the receptor when someone smokes a cigarette or chews tobacco, causing the protein to open a path for ions to enter the cell. The process produces cognitive benefits such as increased memory and focus but is also highly addictive.

Until the new findings were generated, scientists didn’t have a way to examine at atomic resolution how nicotine achieves these cognitive and addictive effects.

The expectation is that the 3D structures will help researchers understand how nicotine influences the activity of the receptor and lead to a medication that mimics its actions in the brain.

The finding may also have benefits in creating medications for certain types of epilepsy, mental illness, and dementia such as Alzheimer’s, which are also associated with the nicotinic receptor. However, Dr. Hibbs cautioned that testing of any ensuing treatment would likely take many years.

Studies have shown smoking cessation drugs have mixed results in treating nicotine addiction, as have other methods such as nicotine patches and chewing gum.

“I just cannot quit smoking,” said Tom Loveless of Dallas, who has tried many times to kick his cigarette habit after becoming addicted 40 years ago while in the Air Force.

He found the study’s findings encouraging and hopes one day scientists can find a way to beat nicotine addiction. “I hate what it does to me,” said Mr. Loveless, a retired 65-year-old grandfather. “I hate the expense. I hate the odor. It upsets my wife. It isn’t worth it.” 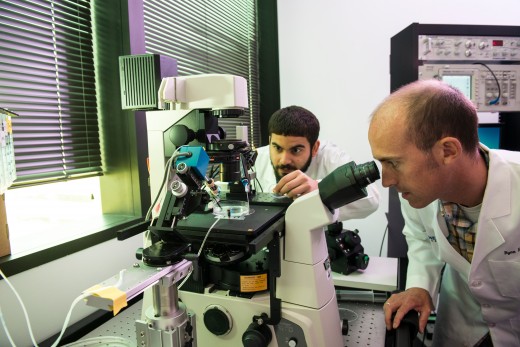 Despite widespread education on the dangers of tobacco use, it still causes nearly 6 million deaths per year worldwide, with smoking the leading cause of preventable death, according to the U.S. Centers for Disease Control and Prevention. Cigarettes alone account for 1 in 5 deaths annually in the U.S.

Those statistics are among the motivating factors for Dr. Hibbs, whose laboratory team began researching how to determine the structure of the receptor in 2012.

The receptor is “a critically important therapeutic target” for addiction and various mental and neurological disorders, said Dr. Joseph Takahashi, Chairman of Neuroscience and Investigator for the Howard Hughes Medical Institute.

“This is a major advance and solves a longstanding problem in crystallizing” the nicotinic receptor, said Dr. Takahashi, who holds the Loyd B. Sands Distinguished Chair in Neuroscience. 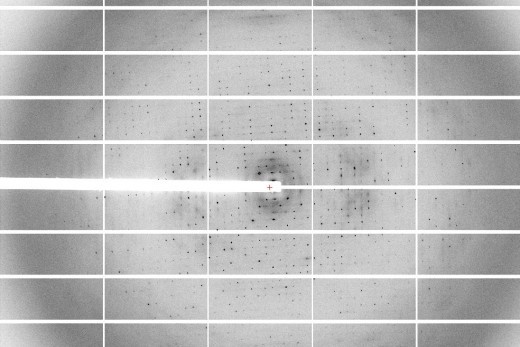 Researchers at the Peter O’Donnell Jr. Brain Institute obtained this X-ray diffraction pattern from crystals of the nicotinic receptor. The ability to grow crystals of the receptor after decades of research is a breakthrough that scientists expect will help them develop new treatments by understanding nicotine’s molecular effects. Image courtesy of the Hibbs Lab.

How they did it

For years scientists around the globe had concentrated efforts on the receptor found in the electric organ of a torpedo ray, a rich source of nicotinic receptors that yielded a wealth of biochemical information and held promise for obtaining a high-resolution atomic map of the protein. 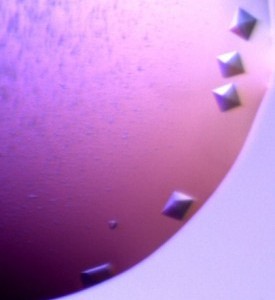 “But they were never able to get the torpedo protein to crystalize,” Dr. Hibbs said, explaining that the protein from the ray proved too unstable and couldn’t be genetically modified. “Many very good research groups had tried to do this and failed. We took a different approach.”

Instead, UT Southwestern researchers developed a method for mass producing nicotinic receptors by viral infection of a human cell line. The team inserted genes encoding the proteins that make the receptor into the virus, and the infected human cells started producing large amounts of the receptor.

They then used detergent and other purification steps to separate the receptor from the cell membrane and wash away all other proteins. Researchers were left with milligrams of the pure receptor that they mixed with chemicals known to promote crystallization.

The team looked at thousands of chemical combinations before eventually being able to grow crystals of the receptor, bound by nicotine and about 0.2 mm long. Lastly, they used X-ray diffraction measurements to obtain a high-resolution structure of the receptor.

The team’s next steps involve determining structures in the absence of nicotine, and in the presence of molecules with different functional effects. Comparisons between structures will allow them to understand better what nicotine does, and how its actions are distinct from those of other chemicals, said Dr. Hibbs, Effie Marie Cain Scholar in Medical Research.

The research was supported by the National Institutes of Health, a HHMI Gilliam Fellowship, the Welch Foundation, Friends of the Alzheimer’s Disease Center, a McKnight Scholar award and a Klingenstein-Simons award.

Smoking sets off a chemical reaction in which nicotine gets into the bloodstream and reaches the brain. The process produces cognitive benefits such as increased memory and focus but is also highly addictive. Here’s how it works: