DALLAS – Dec. 13, 2021 – A subtle smile emerged on Dr. James Leidner’s face as he envisioned telling people of the unusual contribution he made to mankind’s mission to Mars.

For 72 straight hours, the study volunteer lay in a bed at UT Southwestern, the monotony broken only at night when researchers placed his lower body in a sealed, vacuum-equipped sleeping bag to pull down body fluids that naturally flowed into his head while supine. 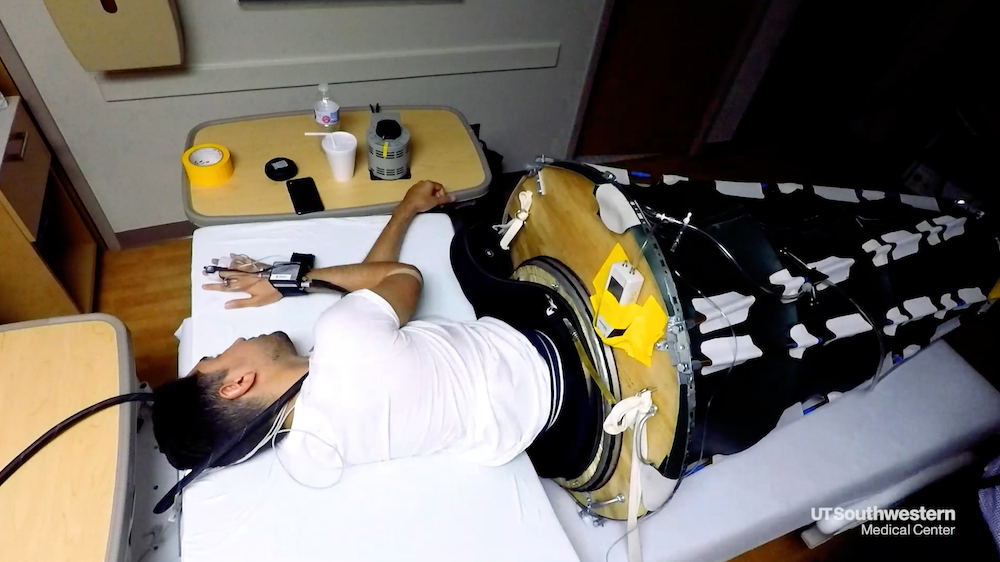 James Leidner spent three nights in a high-tech sleeping bag that unloads pressure in the brain by suctioning fluids into the lower body. NASA hopes the sack can be used by astronauts in space to alleviate the vision problems they commonly endure during longer missions.

New research published in JAMA Ophthalmology shows that by suctioning these fluids and unloading brain pressure, the specially designed sleeping bag may prevent vision problems astronauts endure in space, where fluids float into the head and continually push and reshape the back of the eyeball.

The phenomenon has vexed scientists for more than a decade and remains one of the biggest health dilemmas of human space exploration. But the findings from UT Southwestern – which NASA enlisted to seek answers to astronauts’ vision problems – suggest the high-tech sacks may provide a solution.

Notably, researchers found that while just three days of lying flat induced enough pressure to slightly alter the eyeball’s shape, no such change occurred when the suction technology was used.

“We don’t know how bad the effects might be on a longer flight, like a two-year Mars operation,” said Benjamin Levine, M.D., a UT Southwestern cardiologist who is helping NASA address the health risks of brain pressure and abnormal blood flow in space. “It would be a disaster if astronauts had such severe impairments that they couldn’t see what they’re doing and it compromised the mission.” 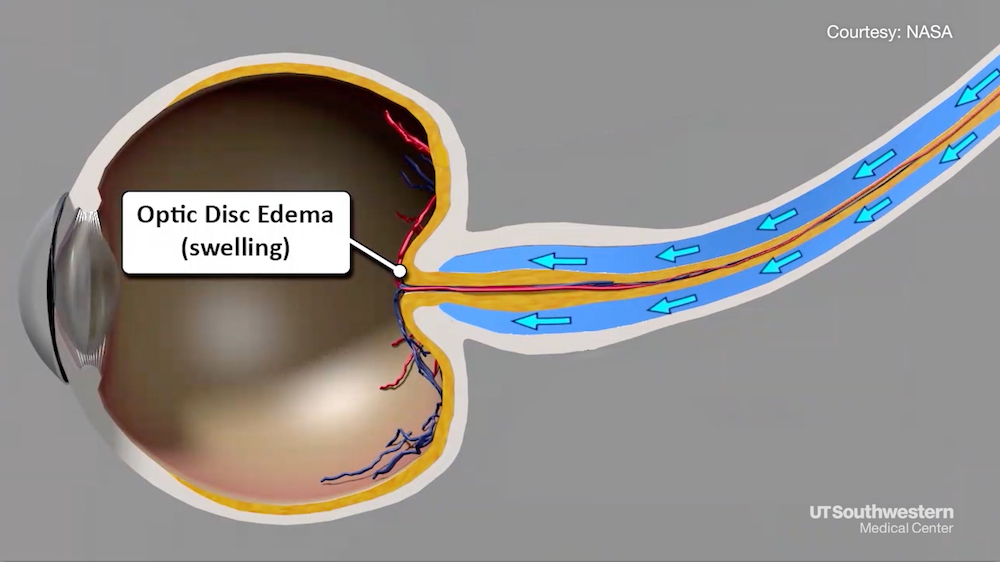 Body fluids in zero gravity apply constant pressure behind the eyes, causing progressive flattening of the eyeball, swelling of the optic nerve, and vision impairment.

NASA hopes the sleeping bag can address a disorder called spaceflight-associated neuro-ocular syndrome, or SANS. The condition is characterized by progressive flattening of the eyeball, swelling of the optic nerve, and vision impairment.

Previous studies by UT Southwestern and the Institute for Exercise and Environmental Medicine at Texas Health Presbyterian Hospital Dallas showed SANS is likely caused by the constant pressure that body fluids apply to the brain.

SANS is not a problem on Earth, where gravity pulls fluids down into the body each time a person gets out of bed. In space, the lack of gravity prevents this daily unloading process, allowing more than half a gallon of body fluids to gather in the head and apply pressure to the eyeball.

NASA has documented vision problems in more than half of the astronauts who served for at least six months on the International Space Station. Some became farsighted, had difficulty reading, and sometimes needed crewmates to assist in experiments.

“You can’t stand up in space to unload the pressure. That’s the problem,” said Michael Stenger, Ph.D., a scientist with NASA’s Human Health Countermeasures Element. 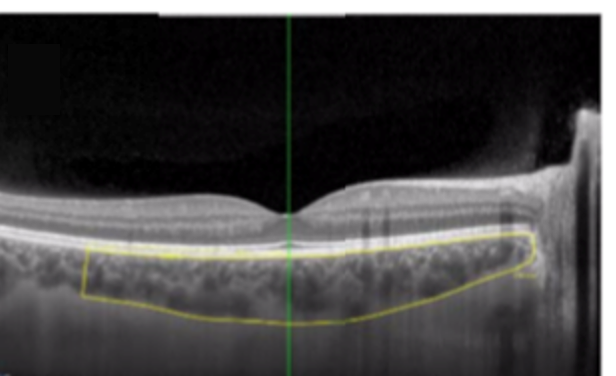 The choroid, a thin layer in the middle of the eyeball’s wall between the retina and sclera, is vulnerable to reshaping during prolonged spaceflight due to body fluids that shift into the head in zero gravity.

Perhaps the best remedy so far has been the use of special space glasses with adjustable lenses that correct astronauts’ changing vision aboard the space station. But this strategy does little to alleviate concerns about the long-term effects on the eyeball, nor the potential cardiovascular complications that Dr. Levine’s team is uncovering.

A 2018 study, for instance, showed that spending six months in zero gravity may increase the odds of developing a common heart arrhythmia called atrial fibrillation. This condition can lead to blood clots, heart attacks or stroke.

“And it’s certainly possible there are other effects of brain pressure we haven’t documented yet,” Dr. Levine said. “The astronauts report something they call the ‘space stupids.’ They make more mistakes than they think they should. Whether that has anything to do with the inability to lower the pressure, we don’t know.”

Although some effects of SANS appear temporary – vision returns to normal shortly after astronauts return to Earth – Dr. Stenger said UT Southwestern’s research is vital to the manned Mars flight that NASA hopes to launch in the 2030s. The sleeping bag technology, in particular, could address both the brain and heart issues.

“What are the long-term health consequences (of SANS)?” Dr. Stenger said. “There’s a large team on the ground working to counteract a lot of these risks.”

The sleeping bag prototype is the culmination of several phases of research conducted by UT Southwestern to help NASA better understand the disorder, including a 2017 study that provided compelling evidence that constant pressure may indeed contribute to SANS.

To test his theory on brain pressure, Dr. Levine recruited cancer survivors from across the country who still had ports on their heads where they had received chemotherapy. These ports offered researchers rare access to measure pressure directly in the brain.

The volunteers each went on a zero-gravity airplane flight into the upper atmosphere where their body fluids floated upward. A neurosurgeon from UT Southwestern’s Peter O’Donnell Jr. Brain Institute measured the brain pressure by inserting special equipment into the port.

“It was hard,” recalled Wendy Hancock, a leukemia survivor from Philadelphia who agreed to go on more than three dozen up-and-down maneuvers into zero gravity. “But NASA is awesome, so, heck yeah, I was going to jump at the chance to help. … I did it for the astronauts.”

The resulting study showed that brain pressure in a person who lies down on Earth is actually higher than in space. However, on Earth the pressure is unloaded when the person stands and gravity pulls the fluids down. Space provides no such relief for astronauts. 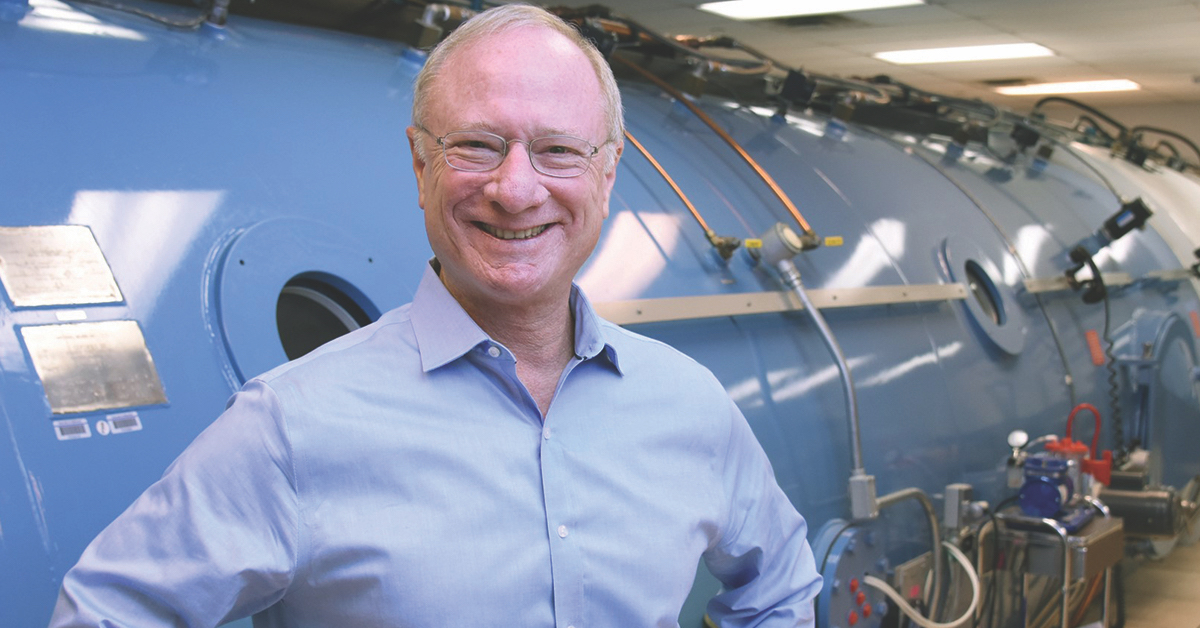 Dr. Benjamin Levine of UT Southwestern has researched the effects of space travel since the early 1990s, when he implanted the first catheter to monitor the heart pressure of an astronaut in space.

With this crucial insight, Dr. Levine’s team started working with the outdoors equipment retailer REI to develop a high-tech sleeping bag that could be used by astronauts each night to unload pressure in the brain. Although similar lower body negative pressure technology has been used for decades to maintain muscle and bone mass in space, previous prototypes were not designed for many hours of use or tested as an antidote for SANS.

The bag has a solid frame – aptly shaped like a space capsule – and is designed to fit over a person from the waist down.

About a dozen people volunteered to test the technology, including Dr. Leidner, an internal medicine hospitalist in San Antonio who is interested in pursuing a career in aerospace medicine.

He made two visits – three days each – to a UT Southwestern research room where he lay in bed. Only during the second visit was he placed in the sleeping bag for eight hours each night. Researchers compared changes in the brain after each stint.

“Being productive has gone out the window,” he joked, pointing out the awkwardness of typing on his laptop while lying flat. “But it’s an experience I could tell my kid one day if it helps humans land on Mars.”

Several questions need to be answered before NASA brings the technology on the space station, including the optimal amount of time astronauts should spend in the sleeping bag each day.

But Dr. Levine said his latest findings indicate SANS hopefully won’t be a health risk by the time the space agency is ready to launch to the Red Planet.

“This is perhaps one of the most mission-critical medical issues that has been discovered in the last decade for the space program,” Dr. Levine said. “I’m thankful for the volunteers who are helping us understand, and hopefully, fix the problem.”

Dr. Levine has researched the effects of space travel since the early 1990s, when he implanted the first catheter to monitor the heart pressure of an astronaut in space. Since then, he has worked with NASA on various projects and advises its flight surgeons on cardiovascular medical issues. NASA recently awarded him $3.8 million in direct and indirect funding over 13 years to study the effects of space travel on the heart.

Other key members of Dr. Levine’s team included Christopher Hearon, Ph.D., first author on the JAMA study and Assistant Instructor in the Department of Applied Clinical Research at UT Southwestern; and Tony Whitworth, M.D., a neurosurgeon from the O’Donnell Brain Institute who measured patients’ brain pressure in zero gravity.