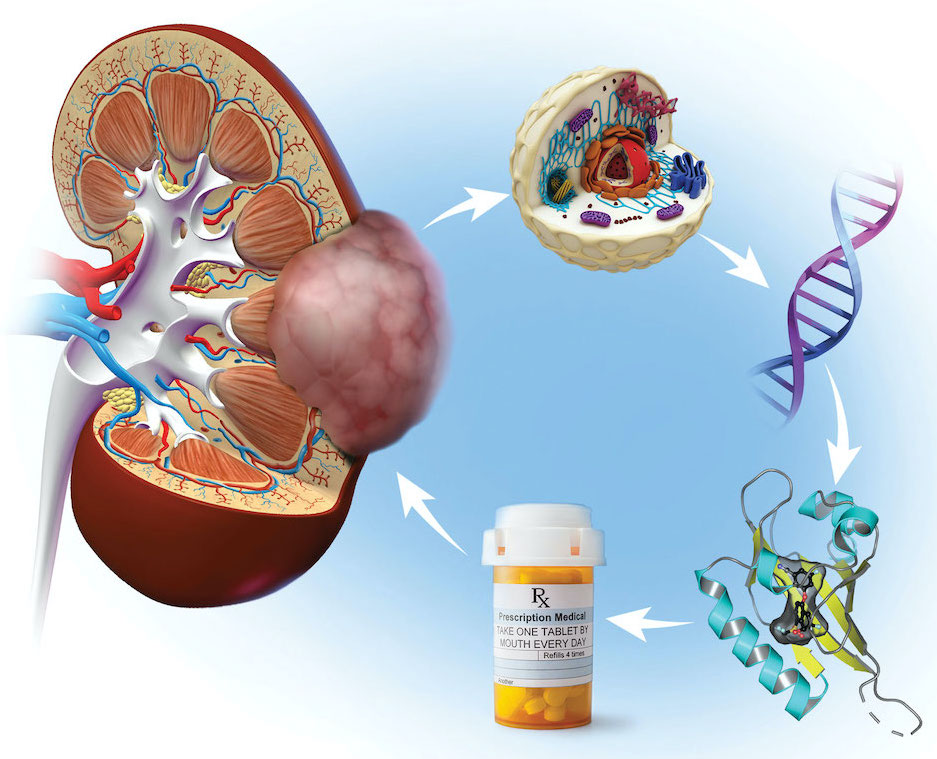 FDA approval of belzutifan culminates a 25-year journey at UTSW from gene discovery to a first-in-class drug.

Merck’s belzutifan grew out of the discovery at UT Southwestern of a protein, hypoxia-inducible factor 2-alpha (HIF-2α), that is key to fuel the growth of kidney and other cancers. HIF-2α was discovered by Steven McKnight, Ph.D., Professor of Biochemistry.

“This is an exciting milestone for patients with inherited forms of kidney cancer who are in need of more effective therapies,” said David Russell, Ph.D., Vice Provost and Dean of Research, and Professor of Molecular Genetics, who collaborated in the early stages of the research.

The drug, once called PT2977, was developed based on a backbone discovered by UTSW researchers, with further drug development efforts conducted by a spinoff company named Peloton Therapeutics, which was launched on the UTSW campus and eventually acquired by Merck.

Drs. McKnight and Russell first identified HIF-2α in the 1990s.

HIF-2α was considered undruggable for many years until two more UTSW scientists at the time – Richard Bruick, Ph.D., Professor of Biochemistry, and Kevin Gardner, Ph.D., Professor of Biophysics, who also directs a structural biology center at the City University of New York – did the structural and biochemical work showing that the HIF-2α molecule contains a pocket that is potentially druggable. The two scientists then identified multiple compounds that fit into this pocket and inhibited the activity of HIF-2α.

“The history of belzutifan’s development demonstrates the value of cross-disciplinary collaborations at academic medical centers and how that can translate to new treatments for diseases,” said Dr. Russell. “It also underscores the value of investing in basic science discoveries at the core of advancements in medicine.”

In 2011, several researchers spun off Peloton Therapeutics, and by 2019, when Merck acquired the company, at least three HIF-2α agents were under investigation. 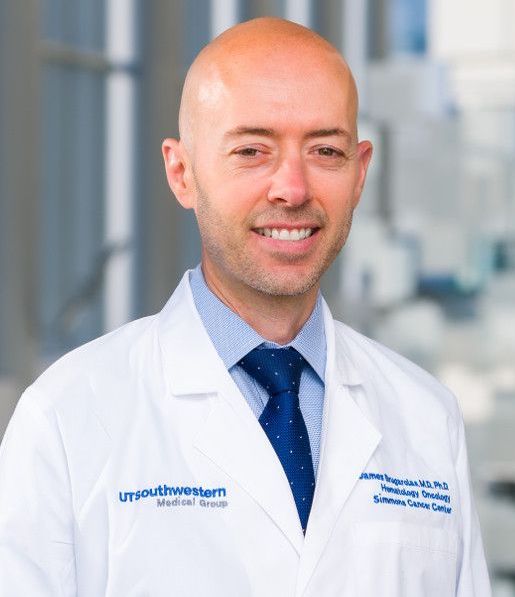 With funding from a prestigious National Cancer Institute SPORE award, they showed in a publication in Nature in 2016 that the drug was able to inhibit HIF-2α in human kidney tumors transplanted into mice and stop their growth.

This and other studies led to the first clinical trial of PT2385, a precursor to PT2977, which became belzutifan. The trial, which was led by the UTSW Kidney Cancer Program, showed that the drug was well-tolerated and active.

“The approval of belzutifan represents a new paradigm in the treatment of kidney cancer,” said Dr. Brugarolas, Professor of Internal Medicine. “By exclusively targeting HIF-2α, which is essential for kidney cancers but dispensable for normal processes, belzutifan specifically disables cancer cells while sparing normal cells. Belzutifan is the best-tolerated kidney cancer drug today and one suitable for patients with familial kidney cancer. It is a testament to the prowess of designer drugs and carefully chosen targets of which it is a prime example.”

TIMELINE: The Path to Developing a HIF-2α Inhibitor

1997
UT Southwestern biochemist Steven McKnight, Ph.D., and molecular geneticist David Russell, Ph.D., report the discovery of the HIF-2α gene, which they call EPAS1. The team shows that HIF-2α binds to another protein, HIF-1β. The HIF-2 partner functions like a pair of tweezers to grab DNA. HIF-2 binds DNA at specific places to initiate the production of other proteins such as VEGF, which support kidney cancer growth.

2003
The laboratories of Richard Bruick, Ph.D., and Kevin Gardner, Ph.D., uncover aspects of the atomic blueprint of HIF-2α. They show how HIF-2α docks with HIF-1β to assemble into a functional HIF-2 complex. They identify a cavity within the HIF-2α protein, hypothesizing that it may offer a foothold for a drug. Working with UT Southwestern’s High-Throughput Screening laboratory, Drs. Bruick and Gardner develop a test to identify chemicals among 200,000 drug-like molecules that bind to the HIF-2α cavity, preventing HIF-2α binding to HIF-1β. By interfering with HIF-2α binding to HIF-1β, these compounds block HIF-2 action. The most promising chemicals undergo a refinement process by medicinal chemists at UT Southwestern.

2010
Peloton Therapeutics is founded by UTSW researchers to develop the HIF-2α blocking chemicals into drugs. Peloton scientists create libraries of related compounds, ultimately identifying PT2385 and PT2977 to test in humans. A related drug, PT2399, is identified for laboratory work.

2016
Dr. James Brugarolas validates HIF-2α as a target in kidney cancer. In experiments incorporating more than 250 mice transplanted with human kidney tumors, researchers show that PT2399 blocks HIF-2α while not affecting related proteins, is active against 50% of human kidney tumors, and has more activity and is better tolerated than sunitinib (the most commonly used drug for renal cancer treatment at the time).

2018
Dr. Kevin Courtney reports the results of a phase 1 clinical trial testing PT2385 in humans. The trial represents the first-in-human study of a first-in-class inhibitor of HIF-2α. The trial, which involves 51 patients, shows that PT2385 is safe, well tolerated, and active against kidney cancer in humans. More than 50% of patients see their cancer regress or stabilize.

2020
Through studies of tumor biopsy samples from patients who participated in the Phase 1 clinical trial, Drs. Courtney, Brugarolas, and Ivan Pedrosa report the identification of drug resistance mutations in patients, establishing HIF-2α as the first-known core dependency of kidney cancer.