DALLAS – April 14, 2020 – Blood pressure readings taken from neuroscience intensive care unit (NSICU) patients had marked differences between opposite sides of the body and different anatomical sites in each individual, highlighting the significant and sometimes extreme variability of this measure even in the same person depending on where it’s taken, researchers from UT Southwestern Medical Center report in a new study. 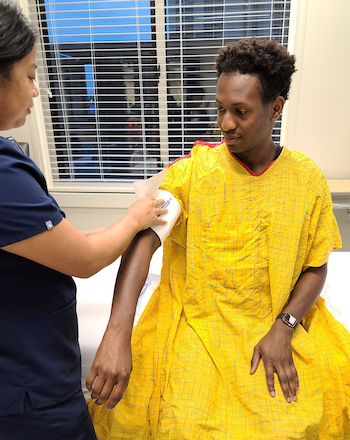 Neurocritical care nurse Kathrina Siaron, taking the blood pressure of a mock patient, helped lead a study that revealed such readings can vary when taken on different parts of the body.

The findings, published online Feb. 25, 2020, in Scientific Reports and the 100th research paper published by nurses at UTSW, could eventually impact how blood pressure information – which informs a variety of medical decisions in the NSICU and beyond – is collected.

“For our patients in the NSICU, blood pressure often needs to be maintained in a very narrow range,” Siaron says. “Moving it one way or another could potentially harm the patient.”

It’s also a parameter that’s been measured much the same way for over a century, she explains: Patients wear a cuff around the upper arm, wrist, or thigh for noninvasive assessments, or a thin plastic catheter is inserted into their arteries for invasive measures, with arterial pressure long considered the gold standard and thought to be within 10 points of blood pressure in the upper arm. Although it’s well known that blood pressure can vary dramatically between patients or in the same patient from moment to moment, medical care providers have long assumed that there was little variation between these measures at different sites on the same patient.

To test this idea, Siaron, Olson, and their colleagues worked with 80 patients admitted to UT Southwestern’s NSICU between April and July 2019. These patients – split almost equally between men and women with a mean age of about 53 – were admitted to the unit for a variety of common serious neurological problems, including stroke, subarachnoid hemorrhage, and brain tumors.

The researchers had these patients sit upright in their hospital beds, wearing blood pressure cuffs on both upper arms connected to different, precisely calibrated machines. Simultaneously, clinicians activated the machines to take readings, then recorded them. They then had the patients wear wrist cuffs and performed the same exercise. For the 29 patients who also had arterial blood pressure sensors, values from those devices were recorded while patients were receiving noninvasive blood pressure readings.

Diastolic measures (the bottom number in blood pressure values) varied by a mean of about 6 points between arms and about 5 points between upper arms and wrists. Arterial pressure often varied significantly from each of the values – sometimes as much as 15 points higher or lower.

Although the mean differences between sites were just a few points on average, they differed by as much as 40 points between some patients, says Olson – a dramatic difference that could radically affect what type of care that patient receives.

“If we take pressure in one arm, a patient seems fine, but in the other arm, they’re in a crisis,” he says. “The values we collected were really all over the place. There was no consistency between the same arm or wrist between different patients.”

It’s unclear why these differences exist between sites, adds Siaron – blood pressure numbers could be affected by an assortment of factors, such as a patient’s posture, anatomical differences, or medical conditions that affect blood flow. The team plans to continue to study blood pressure among different anatomical sites in varying populations, such as patients in the general ICU or healthy volunteers. Eventually, they say, blood pressure might be collected using a totally different protocol, such as averaging the values between two sides of the body or accepting the highest number.

This research was produced by the Neuroscience Nursing Research Center at UT Southwestern, established in 2014 with the mission of training and guiding nurses who want to conduct their own research.

This work was supported by a grant from the Agnes Marshall Walker Foundation.