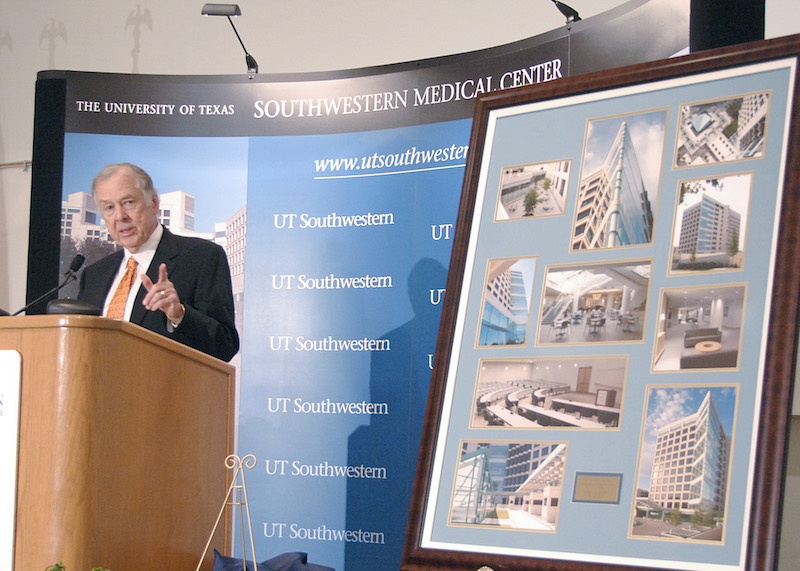 A business icon who comfortably straddled Texas and Oklahoma, Mr. Pickens was a legendary investor, energy entrepreneur, and philanthropist known for his farsighted and innovative ideas, as well as his generosity.

“Boone Pickens always found novel and inspiring ways to deal with challenges,” said Dr. Daniel K. Podolsky, President of UT Southwestern. “Throughout his career and life, Boone worked to ensure both immediate success and ongoing achievement for future generations. His creative solutions to life, business, and philanthropy inspired us all, and stand as an extraordinary testament to his visionary approach.”

Recognized by The Chronicle of Philanthropy among the nation’s most generous benefactors, Mr. Pickens and his foundation contributed more than $53 million to Southwestern Medical Foundation for the benefit of UT Southwestern over decades of generosity. 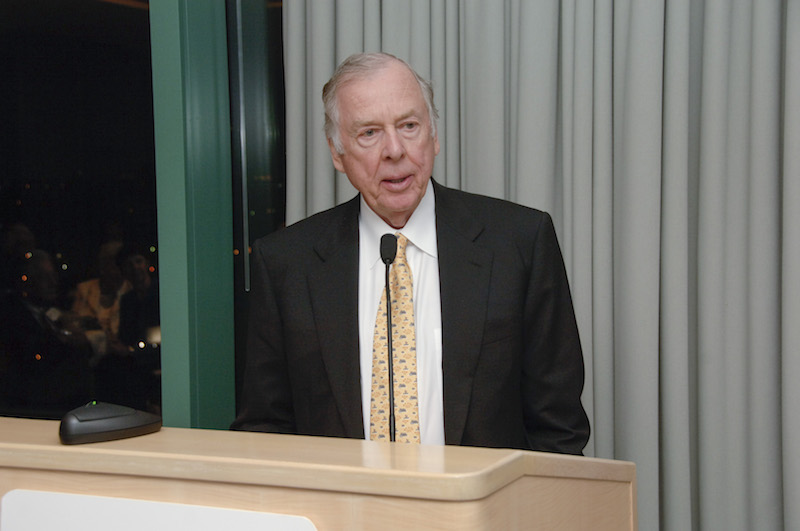 Recognized by The Chronicle of Philanthropy among the nation’s most generous benefactors, Mr. Pickens and his foundation contributed more than $53 million to Southwestern Medical Foundation for the benefit of UT Southwestern over decades of generosity.

“It is my desire through my gift to build a major legacy that will help ensure UT Southwestern’s excellence in decades to come,” Mr. Pickens said after the T. Boone Pickens Foundation donated $50 million to the Southwestern Medical Foundation in 2007.

The landmark gift created a special investment fund, which has grown to $500 million at Southwestern Medical Foundation and is now available to support UT Southwestern’s highest priorities in perpetuity.

In recognition of this landmark gift, an 800,000-square-foot medical research and education facility on UT Southwestern’s North Campus was named the T. Boone Pickens Biomedical Building. Completed in 2005, it was the largest research building ever built for a Texas university at the time. The $240 million facility, which includes the Boone Pickens Training and Conference Center, provides scientists with custom-designed space that promotes close contact and the exchange of ideas among researchers in the dozen departments and research centers that occupy the 14-story tower.

Mr. Pickens also provided funds to create the Boone Pickens Endowment Fund for Cardiology and the Boone Pickens Fund for Cancer Research and Treatment Honoring Dr. Eugene Frenkel. The late Dr. Frenkel was an internationally recognized cancer researcher and admired clinician and educator who was the founding leader of UT Southwestern’s Division of Hematology and Oncology.

“Boone had a sincere and deeply felt commitment to helping people through selected giving to institutions that he was confident could multiply his initial investment. We are grateful to have been among those institutions and look forward to fulfilling that commitment.”

Born in Holdenville, Okla., Mr. Pickens grew up in Amarillo, Texas. He attended Texas A&M University before graduating from Oklahoma State University in 1951. Within five years, he had created the company that would become Mesa Petroleum, which he grew through acquisitions of rivals into one of the world’s largest independent natural gas and oil companies. 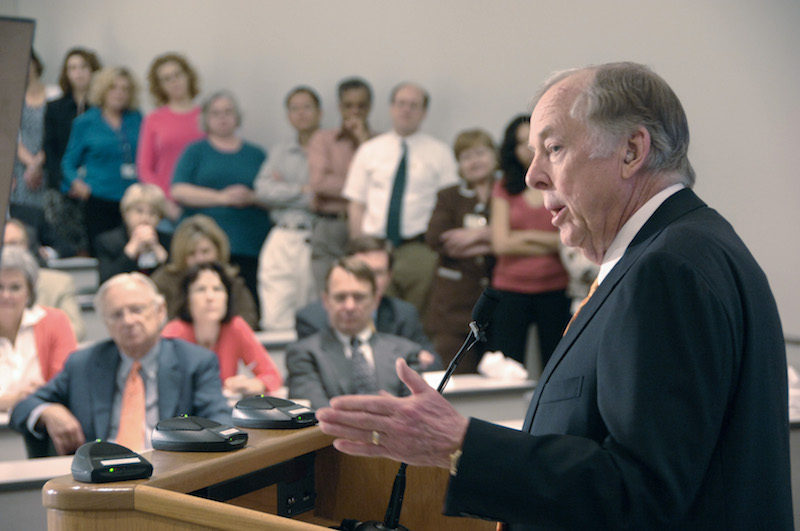 In 1986, he established the nonprofit United Shareholders Association to champion corporate accountability and make corporate management more responsive to shareholders. Upon leaving Mesa in 1996, he established and chaired the hedge fund BP Capital – one of the country’s most successful energy investment funds. He also pursued a wide range of other business interests, from water marketing and ranch development initiatives to wind energy projects and the creation of Clean Energy, a company he founded that became one of North America’s largest providers of vehicular natural gas.

He has appeared on the cover of Time magazine for his celebrated talent in acquisitions, and played prominent roles in both Texas and national political campaigns. In 1987, Mr. Pickens authored his autobiography, Boone, which became a New York Times bestseller, followed in 2008 with The First Billion Is the Hardest.

Mr. Pickens was inducted into the Oklahoma Hall of Fame and the Texas Business Hall of Fame. He received the coveted Horatio Alger Award in 2006, and the 2009 Bower Award for Business Leadership for his business acumen and philanthropy from The Franklin Institute in Philadelphia.

“Boone had a sincere and deeply felt commitment to helping people through selected giving to institutions that he was confident could multiply his initial investment. We are grateful to have been among those institutions and look forward to fulfilling that commitment,” Dr. Podolsky said.