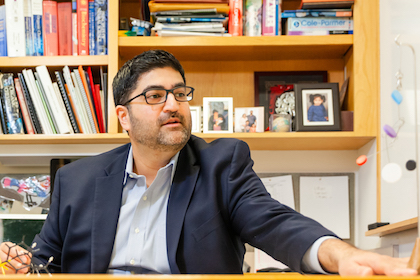 Dr. Tambar, an Associate Professor of Biochemistry and a W.W. Caruth, Jr. Scholar in Biomedical Research, will be the seventh UT Southwestern researcher to receive the prestigious prize since it was first awarded in 2002.

The Welch Foundation, one of the nation’s oldest and largest sources of private funding for basic research in chemistry, presents the $100,000 award annually to honor rising stars at Texas institutions who are expanding the frontiers of chemistry. The award is named after Dr. Norman Hackerman, an internationally known chemist and former President of both The University of Texas at Austin and Rice University.

“Receiving the Hackerman Award is a humbling and wonderful honor,” Dr. Tambar said. “When I learned that I was the recipient, I immediately thought of the members of my lab who helped discover the science that allowed me to receive this award. The success we’ve had is shaped by our environment, and research is a truly collaborative process.”

Dr. Tambar pioneered a new approach that enabled the selective conversion of hydrocarbon chemicals into pharmaceuticals. In the process, he has emerged as one of the global leaders in the field of stereoselective catalysis, an area that tackles the so-called selectivity problem. Selectivity refers to the proper orientation and location of all chemical bonds in a compound. His laboratory devised a novel way to produce compounds with the desired orientation and consistency in their chemical bonds. The orientation and proper location of bonds in a drug is crucial because if even one such bond is out of place or pointed in the wrong direction, the resulting chemical can be ineffectual or potentially dangerous. Hence the emphasis on consistency. This work was published in Nature in 2017.

“Dr. Tambar is a fantastic scientist and an all-around contributor to the UT Southwestern mission. His research program has focused on chemical methods development, including some discoveries published recently in Nature to allow simple, abundant carbon sources such as petrochemicals to become useful building blocks for the synthesis of more complex molecules,” said Dr. Margaret Phillips, Chair of Biochemistry and a Professor of Biochemistry and Pharmacology.

“His work is innovative and original and he has solved problems that have eluded the field. He is also a strong contributor to our educational mission as Chair of our Organic Chemistry Graduate Program and as a mentor to students and postdocs in his lab,” added Dr. Phillips, who holds The Sam G. Winstead and F. Andrew Bell Distinguished Chair in Biochemistry.

One of the graduate students whom Dr. Tambar successfully mentored is Dr. Liela Bayeh, who was lead author on the synthetic chemistry advance published in Nature. Dr. Bayeh went on to earn UT Southwestern’s Dean’s Discretionary Award and is now a postdoctoral fellow at the Massachusetts Institute of Technology.

Dr. Tambar graduated from Harvard University and received his Ph.D. from the California Institute of Technology. He was a National Institutes of Health Postdoctoral Fellow at Columbia University and joined UT Southwestern in 2009. A grant from The Welch Foundation helped launch his independent research career.

“Funding from The Welch Foundation was the most important grant in the early history of our lab,” Dr. Tambar said. “It was the first grant we received and it allowed us to establish our research program. Even today, funding from the Foundation allows us to work in new directions and gives us the resources to be creative and risky when exploring new areas of science.”