History of the Division of Infectious Diseases and Geographic Medicine

The Division of Infectious Diseases and Geographic Medicine at UT Southwestern has a rich history as home to many of the leading experts in Infectious Disease. There is probably no other specialty in Medicine that has experienced greater changes in terms of events and pathogens. An abbreviated history of the division is outlined here. Please see the PDF document for a more comprehensive history of the division written by Dr. James Luby. 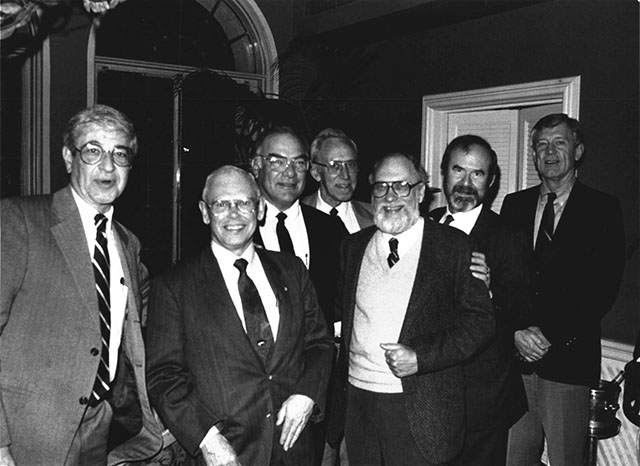 1953
Dr. Abraham Braude becomes the first Chief of the Infectious Diseases division. Dr. Braude later becomes president of the Infectious Diseases Society of America (IDSA).
1957
Dr. Jay Sanford becomes chief of the Infectious Diseases division. With Dr. A.K. Pierce in Pulmonary and others, he documents the important role of main-stream reservoir nebulizers as a source of gram negative bacteria causing pneumonia in patients on ventilator therapy. He goes on to become president of the IDSA. He is best known for his authorship of the Sanford Guide to Antimicrobial Therapy.
1966
Major epidemic of St. Louis encephalitis in Dallas. The epidemic is discovered early and its extent predicted allowing investigations of the disease which involve 16 faculty members and fellows and eventuated into a three-paper series appearing in the Annals of Internal Medicine.
Gram negative bacterial colonization of the nasopharynx is first described at Parkland as a common occurrence in hospitalized patients with underlying illness. Psychiatric patients and normal controls are not colonized.
1970
Resurgent measles (Rubeola) in Dallas County due to low rates of immunization of children (1970, 1988). The 1988 epidemic involved 2300 patients and 6 deaths and spills over to involve 33 adults working at Parkland.
1975
Dr. James P. Luby becomes chief of the Division. Dr. Luby went on to become the head of the Virology Laboratory at PMH, the chief of Infection Control at PMH and later in becomes the medical director of a CDC sponsored STD Prevention and Training Program.
1978
Parkland Memorial Hospital had its first outbreak of MRSA infections in the Burn Intensive Care Unit (BICU) in 1978.
1982
AIDS at Parkland. A Clinic managing patients with HIV/AIDS at PMH was set up in 1983 and 1984. Eventually, as many as 7,000 patients with HIV infection were being seen each year at PMH.
1986
Dr. Robert Munford discovers AOAH, a human and animal enzyme which detoxifies endotoxin in vivo.
1989
Campus-wide epidemic of histoplasmosis at UTSW shown to be related to construction activities and inadequate filtration of intake air in modern air-conditioned buildings. An estimated 600 infections are documented leading to 29 clinical cases.
1997
Dr. Richard (Rick) Koup becomes head of the Division of Infectious Diseases. He served as division chief until 2001, leaving for the NIH where he became Chief of the Immunology Laboratory, Vaccine Research Center.
2004
Dr. Beth Levine was recruited to UTSW where she served as the Chief of the Division of Infectious Diseases from 2004-2011. Dr. Levine now serves as the Director of the Center for Autophagy Research at UTSW. She was elected into the National Academy of Sciences in 2013.
2010
UTSW Transplant Infectious Diseases Unit established at St. Paul Hospital.
2010
Dr. Kavita Bhavan becomes the Medical Director of the Outpatient Parenteral Antimicrobial Clinic/Infectious Diseases Clinic at PMH and begins an innovative, award-winning program of self-administered outpatient antibiotic therapy (S-OPAT).
2012
One of the largest West Nile Virus (WNV) epidemics occurs in Dallas County with 400 clinical cases and 20 deaths. Aerial spray of insecticide is necessary for control.
2016
Dr. Trish M. Perl becomes the sixth head of the Infectious Diseases Division. She was recruited from Johns Hopkins Health System where she served as Senior Epidemiologist. 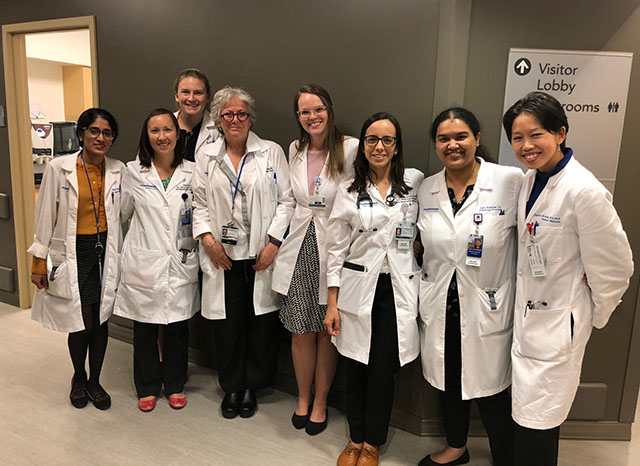