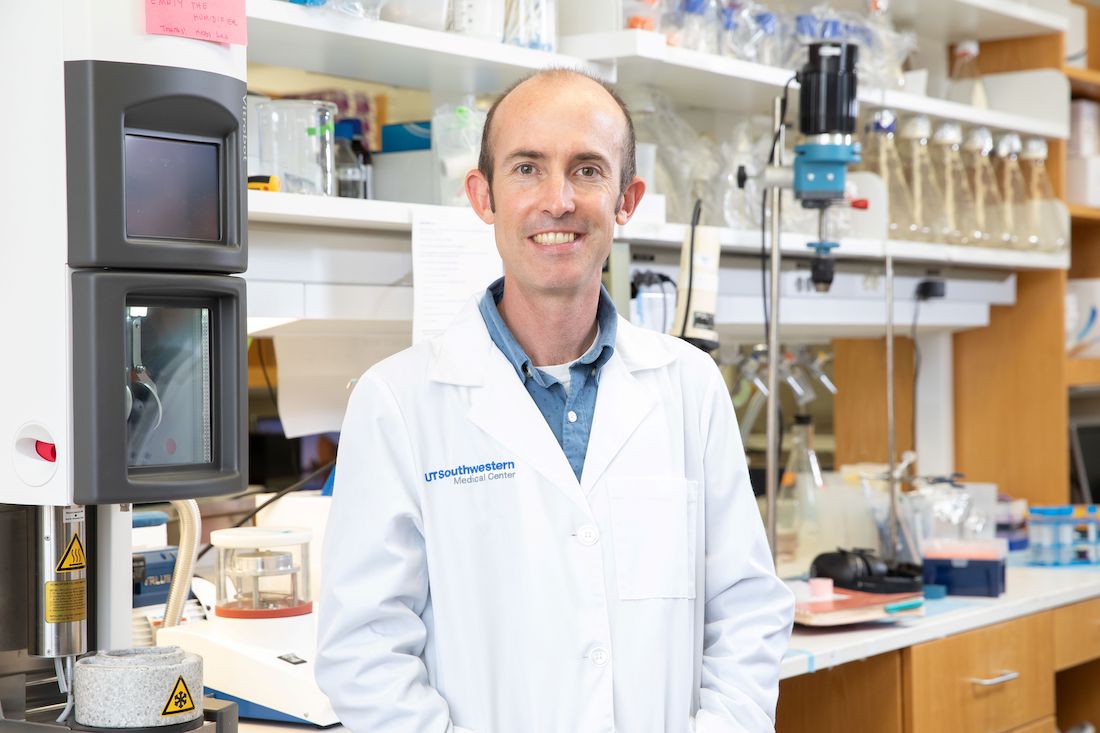 Neuroscientist Ryan Hibbs, Ph.D., has been honored for his work on structure and function of receptors in the brain.

DALLAS – Jan. 19, 2022 – UT Southwestern structural biologist and neuroscientist Ryan Hibbs, Ph.D., has received a 2022 Norman Hackerman Award in Chemical Research. The prize recognizes his work investigating the structure and function of receptors on the surfaces of brain cells and how they interact with drugs, such as nicotine or general anesthetics.

Dr. Hibbs, Associate Professor of Neuroscience and Biophysics and a member of the Peter O’Donnell Jr. Brain Institute, is one of two Hackerman Award winners this year and the ninth UT Southwestern researcher to receive the prestigious prize since its establishment in 2002. Dr. Guihua Yu of UT Austin was selected for his work in nanomaterial science.

The Welch Foundation, one of the nation’s oldest and largest sources of private funding for basic research in chemistry, presents the $100,000 award annually to a rising star at a Texas institution. The award is named after the late Norman Hackerman, Ph.D., an internationally known chemist, former president at UT Austin and Rice University, and longtime Chair of the foundation’s Scientific Advisory Board.

“I was blown away and extremely grateful to find out that I had won one of this year’s Hackerman Awards. I know some of the previous awardees and their work, and it is an honor to be considered a part of that exceptionally high caliber of scientists,” said Dr. Hibbs, an Effie Marie Cain Scholar in Medical Research.

“My very first research grant came from The Welch Foundation, and it allowed me to take more risks, hire a postdoctoral fellow, and do more in my lab, but it also gave me assurance that an external committee thought my work was exciting enough to support. The Welch Foundation has been immensely helpful in supporting me financially and giving me confidence to succeed,” he added.

The award recognizes Dr. Hibbs’ important contributions to better understand synaptic ligand-gated ion channels, a type of cell-surface receptor present on neurons. These protein receptors act as locks that are opened by molecular keys, either natural chemicals or synthetic pharmaceuticals. In particular, the Hibbs lab has studied receptors that bind nicotine – the addictive component in tobacco – as well as general anesthetics and the benzodiazepine class of anti-anxiety drugs. He has also studied receptors that bind natural neurotransmitters.

“Ryan Hibbs is clearly one of the rising stars in the structural biology and biophysics of neuronal ionotropic receptors. His recent discoveries solving the structures of the nicotinic acetylcholine receptors and the GABAA receptor are landmark accomplishments. Perhaps most stunning historically is the structure of the native nicotinic receptor from the fish electric organ, which was the very first neurotransmitter receptor to be described by neuroscience pioneer Jean-Pierre Changeux over 50 years ago,” said Joseph Takahashi, Ph.D., Professor and Chair of Neuroscience, a Howard Hughes Medical Institute (HHMI) Investigator, and holder of the Loyd B. Sands Distinguished Chair in Neuroscience at UTSW.

An important first step in understanding the workings of these channels is to visualize them at high magnification and resolution, Dr. Hibbs explained. He added that UT Southwestern’s decision to invest in a technology known as cryo-electron microscopy (cryo-EM) – an imaging system that allows visualization of proteins at the atomic level by freezing them in place – has been key to his lab’s success in this field. Dr. Hibbs’ wife, Colleen Noviello, Ph.D., is a Senior Research Scientist at UT Southwestern and has collected most of the cryo-EM data for the Hibbs lab.

“Ryan possesses a powerful combination of creativity, fearlessness, technical excellence and superb scientific taste. These have allowed him and his group to determine some of the most important structures in molecular neuroscience,” said Michael Rosen, Ph.D., Professor and Chair of Biophysics and an HHMI Investigator. Dr. Rosen also holds the Mar Nell and F. Andrew Bell Distinguished Chair in Biochemistry at UTSW. “His work has deepened our understanding of basic functions of the brain and opened the door to improved therapeutics for human conditions spanning mental illness to insomnia.”