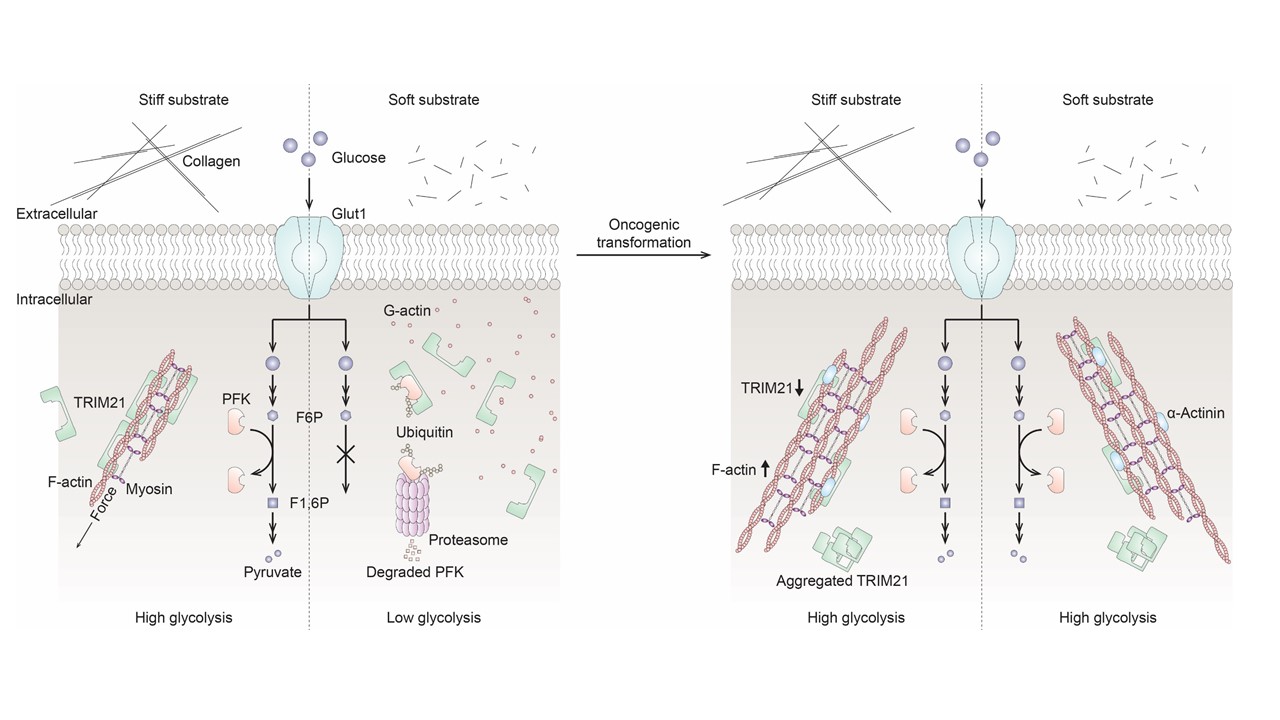 DALLAS – Feb. 13, 2020 – Using human lung cancer cells, UT Southwestern researchers have uncovered how cells in general modulate their energy consumption based on their surroundings and, furthermore, how cancer cells override those cues to maximize energy use. The findings, published this week in Nature, extend a report from last year in which the same group discovered that the cell’s skeleton can promote cancer cell growth in metastasis or when under chemotherapy assault.

The mechanics of the microenvironment of the cell impact cell functions like growth, survival, death, and changes in cell shape, says Danuser. All of these behaviors require energy, but Danuser says it has never been studied how cells might change their energy use based on their microenvironment.

Cells can sense the stiffness of the tissues/materials around them through the proteins that make up their skeleton, he says. Lung cells in particular stretch and contract with every breath; however lung tissues stiffen when certain conditions develop, like pulmonary fibrosis or cancer. Danuser’s team set out to study the interplay between energy use and tissue stiffness. They first grew normal lung cells on stiff and soft surfaces separately – glass coated with a stiff collagen or glass coated with a softer, more gelatinous collagen. They found by measuring breakdown metabolites that cells grown on soft surfaces routinely decrease their energy use: stiff surface – more metabolites; soft surface – fewer metabolites.

The team then investigated how this was controlled and in particular asked whether the cells were making the same amount of one critical enzyme, phosphofructokinase (PFK), needed for glucose metabolism. By tagging the PFK so that it glowed green and growing cells containing that tagged enzyme on soft and hard surfaces, the team found the same amount of the enzyme was initially made, but much less was found in the cells grown on soft surfaces. They concluded that something must be sensing the soft surface, then clearing out the PFK after it was made.

To confirm if this indeed happened in intact lungs, the team measured the same metabolites in tissue – healthy and tumorous – removed from patients. Using a computer-based measurement tool, they were able to approximate the levels of PFK in single cells growing in the softer center of the lung, near stiff airway branches, and in tumors. Cells from tumors and those growing near airway branches routinely had higher levels of PFK than those growing in the center of the lung, as predicted from the experiments with lab-cultured cells. 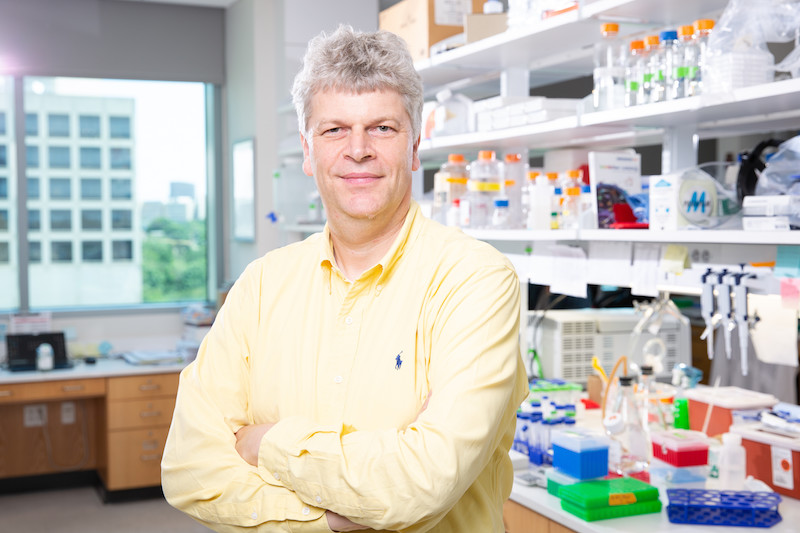 “These experiments allowed us to conclude that there is indeed some sort of mechanical regulation of cellular metabolism and that cancer cells can override that regulation,” says Danuser, holder of the Patrick E. Haggerty Distinguished Chair in Basic Biomedical Science.

The researchers next reasoned that stiffness sensing must somehow be related to the cell’s skeleton, which itself can change dynamically from rigid to more pliable, depending on what the cell is doing. Using microscopes and computer software they wrote themselves, they examined the skeletons in cells grown on both stiff and soft surfaces. On stiff surfaces, they found the cell skeleton contained longer, thicker protein cables; on soft surfaces, the skeleton material was shorter, less bundled, and more curved.

They knew from their experiments that PFK, the limiting enzyme for glycolysis, is somehow removed after it’s made if cells are grown on softer tissues. That finding caused the researchers to look for a link between the cell’s skeleton and its system for so-called protein degradation, or removal of unneeded enzymes. The team systematically depleted from cells each of 18 proteins they identified in a bioinformatics analysis as candidates targeting PFK for degradation. They asked which of those candidates, when removed, would increase the cell’s energy use, mimicking the override observed in lung tumor cells.

They found the TRIM21 protein.

The researchers discovered that the thicker cell skeleton bundles sequester the TRIM21 and prevent it from targeting other proteins for destruction. When the cell grows on a softer surface, the bundles are thin, releasing TRIM21 and allowing it to interact with the PFK, so that the enzyme gets degraded and thus glucose metabolism is reduced, says Danuser. Cancer cells regulate their skeletons differently: The TRIM21 stays stuck to the skeleton, prevented from targeting metabolic enzymes for degradation and keeping metabolism high.

They also found that a genetic mutation of TRIM21, which has been clinically reported in cancer, leads to clumping of the TRIM21 protein. Instead of sticking to the cell skeleton, the TRIM21 sticks to itself, rendering it inactive.

“This study establishes a mechanism for mechanically regulated glycolysis via TRIM21 degradation of PFK in a pathway that involves the cell’s skeleton and ultimately affects energy availability in healthy and cancerous cells,” Danuser says. “In cancer cells, suppressing TRIM21 function through sequestration may contribute to the malignancy’s metabolic hallmark: the ability to keep the energy coming despite changes in its environment.”

Disclosures: DeBerardinis is an adviser to Agios Pharmaceuticals.