HIF-2α, a protein discovered at UTSW, is pivotal for progression of clear cell renal cell carcinomas and can be disabled by new experimental drug. 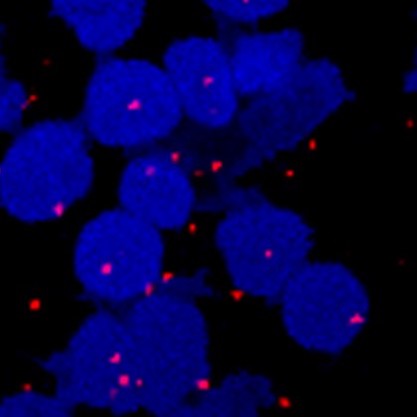 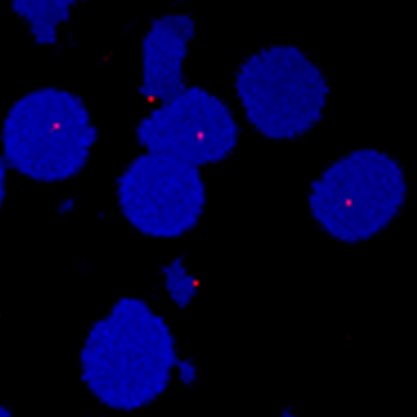 The red dots represent the HIF-2 complex in kidney cancer cells (blue circles), formed when HIF-2α and HIF-1β proteins bind together. The pairings create a molecular switch, opening up communication channels and activating genes responsible for the creation of blood vessels, which cancer cells need to survive. The HIF-2 blocking drug PT2385 breaks apart the complex, as seen in the on-treatment image (right) where the red dots have largely disappeared.

DALLAS – Feb. 14, 2020 – An experimental drug already shown to be safe and help some patients with clear cell renal cell carcinoma, a deadly form of kidney cancer, effectively disables its molecular target. The finding from a team of researchers at the UT Southwestern Medical Center’s Kidney Cancer Program, published in the Feb. 15 issue of Clinical Cancer Research, reveals a weakness in this cancer that could be further exploited with other targeted treatments in the future.

About 70,000 new cases of clear cell renal cell carcinoma (ccRCC) are diagnosed every year in the U.S. The five-year life expectancy after diagnosis is low compared with other cancers, at about 10-12 percent. Unlike many other forms of cancer, ccRCC doesn’t respond to chemotherapy or conventional radiation.

UT Southwestern researchers are pioneering treatment advancements in kidney cancer, from basic science and gene discovery to the development of first-in-class drugs.

When study lead author James Brugarolas, M.D., Ph.D., professor of internal medicine (hematology/oncology) and director of the Kidney Cancer Program at UT Southwestern, began his career two decades ago, only one medication was approved to treat this cancer. There are now over a dozen approved drugs for ccRCC; however, says Brugarolas, each offers only a modest effect on survival and comes with a host of side effects.

Searching for better pharmaceuticals to fight this cancer, researchers at the Kidney Cancer Program focused on a protein known as hypoxia-inducible factor 2α  (HIF-2α), which investigators at UTSW first discovered and described in the late 1990s. HIF-2α is a target of a tumor suppressor protein called von Hippel-Lindau (VHL) that’s characteristically inactivated in most cases of ccRCC. When HIF-2α pairs with HIF-1β, it’s able to regulate the expression of over 100 genes, including many that play key roles in cancer, such as those that control the formation of blood vessels or maintain stem cell-like qualities.

Although HIF-2α had long been considered undruggable, UTSW researchers identified a vulnerability in the protein structure in 2009 – a pocket that plays a key role in binding to HIF-1β. Eventually, researchers at UTSW identified compounds that bound this pocket, which served as the basis for the founding of Peloton Therapeutics Inc. in the UTSW BioCenter at Southwestern Medical District and the development of the HIF-2 inhibitor drug PT2385. After extensive preclinical testing in animal models, scientists at UTSW and their colleagues performed a phase one clinical trial that showed that this compound was safe, well tolerated, and effective at controlling cancer in 40 percent of patients.

Through an in-depth study of a subset of patients who participated in the phase one study and were willing to undergo extensive testing, the investigators sought to determine how well PT2385 blocked HIF-2α in ccRCC patients, how specific the effect was, and how important HIF-2α was for the cancer.

Their results showed that within two weeks after patients started on the drug, the amount of blood circulating in their tumors decreased by about 29 percent on average. While the cohort of patients tested was relatively small, the results suggested that the drug was starving tumors from blood, says Ivan Pedrosa, M.D., Ph.D., professor of radiology, chief of magnetic resonance imaging at UTSW, and co-leader of the study. Unlike all other drugs that seek to block blood flow to tumors, but do so everywhere, the effect of PT2385 was specific for the cancer.

Within tumors, tests on biopsied tissue showed that PT2385 effectively dissolved the HIF-2α/HIF-1β, blocking the complex from activating cancer-promoting genes. The effect was highly specific, and other related complexes, such as HIF-1α/HIF-1β were unaffected – showing its extreme specificity for HIF-2α.

After more than a year on PT2385, a patient’s tumor appeared to develop resistance to the drug, progressing unabated. Further tests revealed the development of a mutation within HIF-2α that prevented access by the drug to the pocket. The same mutation was found in a second patient.

Brugarolas says that the findings, which extend previous discoveries they reported in Nature, offer proof that HIF-2 is critical for ccRCC progression and that HIF-2α inhibitors such as PT2385 offer a novel and powerful weapon against this deadly disease.

“This study exposes the Achilles’ heel of ccRCC tumors,” says Brugarolas, who leads one of just two National Cancer Institute-designated Specialized Programs of Research Excellence (SPOREs) for kidney cancer in the U.S.

“Short of a cure, which we’re still struggling to get to patients, we think this drug and other future drugs in this class could offer a durable way to fight this cancer while preserving quality of life,” adds Kevin Courtney, M.D., Ph.D., UTSW associate professor of internal medicine (hematology/oncology) and first author of the study.