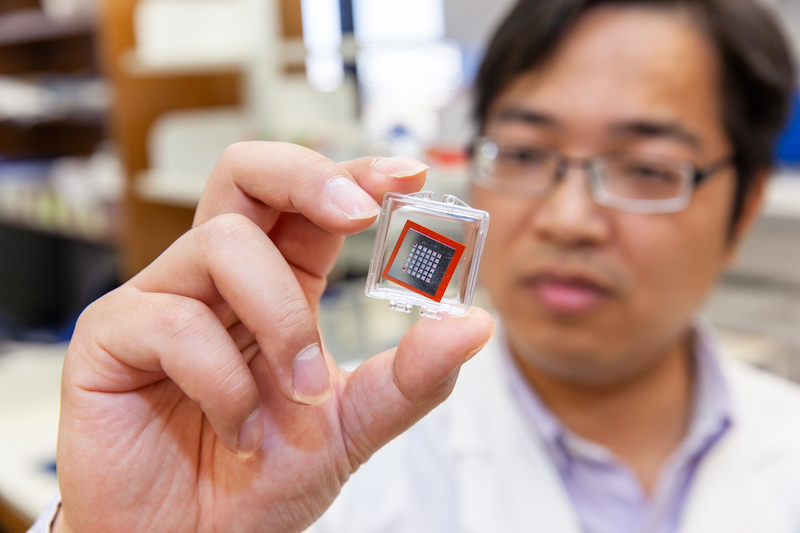 DALLAS – Feb. 6, 2020 – UT Southwestern Simmons Cancer Center researchers have developed technology that is spawning a much better form of drug delivery for gene therapy and has achieved a 43 percent increase in the survival of mice with glioblastoma, one of the deadliest forms of human brain cancer. The researchers used specially engineered silicon chips to zap cells and produce a new drug delivery system. The results were published in Nature Biomedical Engineering.

“We were shocked at our findings. We have opened a new door for gene therapy,” says Zhaogang Yang, Ph.D., assistant professor of radiation oncology at UT Southwestern Medical Center and the lead author of the study. He says his team believes it is the best drug delivery for gene therapy seen in a lab to date. It appears that it can be used in gene therapy drug delivery in any type of cancer and in other diseases such as genetic disease and cardiovascular disease.

The Cellular NanoPorotation Chips were designed with a million tiny holes in them and were originally intended to deliver biological cargo into skin cells in mice. The skin tests worked, so Yang decided to try using the dime-sized chips to get DNA into mouse cells with a gene that is often mutated in the brain cancer, glioblastoma. 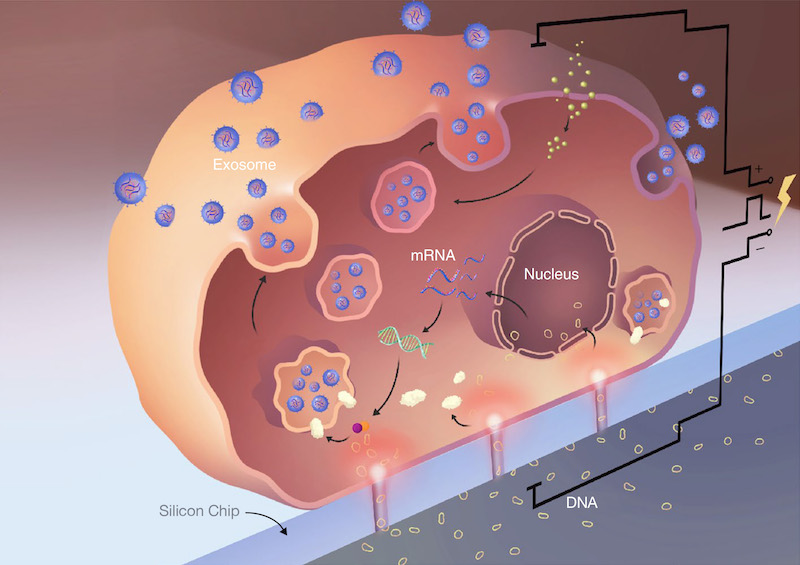 An electrical charge brings DNA from one side of the silicon chip into the cell. The cell later secretes exosomes full of cancer fighting agents.

Yang’s team placed mouse cells on one side of the chip and on the other side had small circles of DNA containing PTEN, a gene that suppresses tumor growth. Then they zapped the chips with about the same voltage of a lightbulb. The cells’ natural response to brief electrical shocks caused the membranes to expand momentarily, opening tiny pores that gave scientists an opportunity to smuggle DNA into the cell.

Twenty-four hours after the cells were zapped they were found to carry PTEN. But to the scientists’ surprise, they also found that the cells, while recovering from the electrical shock, had spit out exosomes, tiny membrane-encased bubbles that can travel through the bloodstream. When the team examined the exosomes they found them to have 10,000 times more PTEN mRNA than other mRNA-production techniques. Oncologists prize mRNA for the important role it plays in reintroducing PTEN into cancer cells.

Using lasers to measure the quantity of exosomes, the team found that the cells had generated about a million exosomes – 50 times more exosomes than standard exosome-generating techniques. The exosomes and their abundance were a great find, because the scientists believed the exosomes could travel through the bloodstream and deliver PTEN directly to the cancer cell.

The team collected the exosomes containing PTEN and injected them into the tails of 20 mice with human glioblastoma. Mice with the exosomes produced by the Cellular NanoPorotation Chip lived 70 days. Mice with standard treatment lived 40 days.

Using a PTEN gene that generates a PTEN protein that glows, the researchers were able to look at mouse brains and confirm that PTEN had found its way to the tumor. It was proof that the exosomes produced by the Cellular NanoPorotation Chip had traversed the blood-brain barrier, one of the most difficult hurdles in the body. This was evidence that it could go anywhere in the body, according to Wen Jiang, M.D., Ph.D., an assistant professor of radiation oncology and member of the Simmons Cancer Center who was also part of the study.

“If we can encapsulate large amounts of mRNA into these exomes and deliver them into the right place in an efficient manner, it will open up a whole host of potential areas for genetic disease, autoimmune disease, cardiovascular disease and inborn errors of metabolism in addition to cancer,” Jiang says.

According to Yang, each silicon chip costs less than $10 and can be used at least 50 times.

Yang has moved on to testing whether the procedure can produce exosomes with PTEN combined with other genes implicated in cancer.

The authors declared no competing interests.