DALLAS – April 23, 2020 – A combination of immunotherapy agents that encourages some immune cells to eat cancer cells and alert others to attack tumors put mice with a deadly type of brain cancer called glioblastoma into long-term remission, a new study led by UT Southwestern scientists suggests. The finding, published online March 20, 2020, in Nature Communications, could lead to new therapies that may significantly extend survival for human glioblastoma patients, which stands at an average of 15 months after diagnosis even with current state-of-the-art therapies. 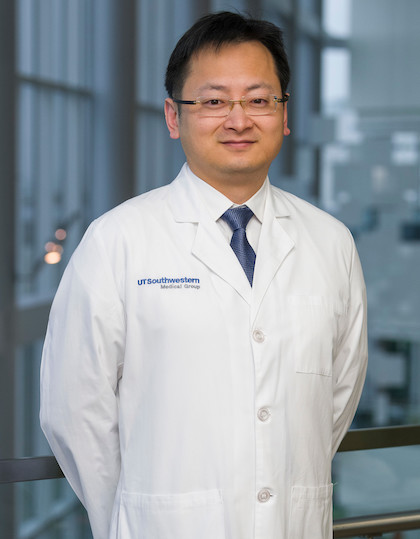 The immune system has two branches: innate immunity, an evolutionarily older system that continually scans the body and removes foreign invaders such as bacteria or viruses often by “eating” them in a process called phagocytosis; and adaptive immunity, which provides a more targeted and stronger response based on memory acquired from previous exposure to a pathogen. These branches overlap somewhat: For example, the innate immune system trains the adaptive one on where to focus its efforts using the potential pathogens it encounters.

Some pharmaceuticals in development aim to boost the innate immune system’s action against cancer by blocking CD47, a protein that many cancer cells display on their surfaces that functions as a “don’t eat me” signal. Glioblastoma (GBM) – the most common primary central nervous system malignancy in adults and a cancer that Jiang frequently treats in clinic – often displays substantially elevated amounts of CD47 on its tumor cell surfaces, with higher amounts generally suggesting worse outcomes for patients. But these drugs have had mixed results in clinical trials, Jiang says; although they’ve shown promise for blood cancers, such as leukemias, their performance for solid tumors has been disappointing.

Seeking to boost survival for GBM patients, Jiang and his colleagues searched for ways to encourage innate immune cells to eat GBM cells, which not only destroys these cells directly but also helps train the adaptive immune system to continue the attack.

The researchers first tested how well CD47 monoclonal antibodies – proteins that stick to and mask CD47 – work on GBM cells grown with innate immune cells called phagocytes in petri dishes. Although this agent did boost the phagocytes’ consumption of the cancer cells, “the activity wasn’t too striking,” Jiang says. “It was nothing to brag about.”

Next, he and his colleagues tested increasing the cancer cells’ “eat me” signal by administering a drug called temozolomide (TMZ), a decade-old pharmaceutical that’s a mainstay for most GBM treatment protocols. The drug activates stress responses in cancer cells that make the immune system more likely to eliminate them. Although this drug also increased phagocyte consumption of the cancer cells, these results were also lackluster, says Jiang, also a member of UT Southwestern’s Harold C. Simmons Comprehensive Cancer Center.

Jiang and his colleagues then reasoned that because these two pharmaceuticals operate using completely different mechanisms, they might get more of a response combined. Sure enough, when they administered both agents together, they appeared to work in synergy, prompting phagocytes to eat many more GBM cells than either drug alone. Further experiments showed that once phagocytes had eaten their cancerous prey, they used components from these tumor cells to prime the immune system’s T cells – the primary adaptive immune cells that fight cancers – to kill more GBM cells.

When the researchers tested this combination therapy in a mouse model of GBM, it successfully shrank tumors and extended life. However, in time, the tumor cells developed a different way to evade the immune system by boosting their production of a protein called PD-L1, which shields them from T cell attack. Thwarting this move, the researchers added an antibody against this protein called anti-PD-1. Together, this three-part regimen – anti-CD47 antibodies, TMZ, and anti-PD-1 antibodies – dramatically extended survival. About 55 percent of these animals did not die over the course of the study, a scenario akin to long-term remission in patients, Jiang says. He and his colleagues hope to test this approach in humans soon in a clinical trial, he adds.

“If a new therapy extends survival by even one to two months, it’s considered a blockbuster drug,” Jiang says. “Here, we’re talking potentially about a significant proportion of patients who could be cured. Bridging the innate and adaptive immune systems could prove to be a major advance for GBM.”

Other UTSW researchers who contributed to this study include Yifan Wang, Zhaogang Yang, Mingming Yang, and Weiye Deng.

This research was supported by grants from the National Institute of Neurological Disorders and Stroke Grant R01 NS104315, the Cancer Prevention and Research Institute of Texas RR180017, the American Brain Tumor Association DG1900021, the National Cancer Institute K08 CA241070, and the Preston A. Wells, Jr. Endowment at the University of Florida.