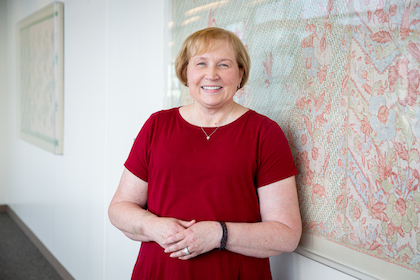 DALLAS – Oct. 29, 2019 – Sandra McKinney grew so attached to the Simmons Cancer Center at UT Southwestern that she decided to fly back for follow-up appointments instead of finding a new provider when she moved to New Jersey.

“The people are kind. The nursing staff is really kind,” she said. “I just felt like I could never be anything but joyous that I was there.”

The 59-year-old mother of two said she discovered a lump in her breast in January 2017. After visiting a local hospital, she received a phone call with a diagnosis of triple negative breast cancer.

“She told me I needed to find a surgeon and good luck and hung up the phone,” Mrs. McKinney said.

Triple negative breast cancer is particularly aggressive and challenging because it lacks the three hormones that oncologists typically use as a foothold for cancer treatments.

At the Harold C. Simmons Comprehensive Cancer Center Mrs. McKinney said she met people who shared her positive attitude and focus on what can be done.

“I felt relief because I felt like I’d found my people,” she said.

People like her oncologist Dr. Nisha Unni, a physician-researcher who is conducting clinical trials on breast cancer and triple negative breast cancer. Dr. Unni is working to identify with a much higher level of specificity how effective chemotherapy is and which patients are best suited for it. By delivering chemotherapy before – instead of after – surgery, she can analyze surgically removed tumors down to the molecular level. It’s a forward-looking approach paving the way for future treatments.

Mrs. McKinney remained focused on the future not just for her, but for her family. She elected for genetic testing at UT Southwestern to learn what might be in store for her and her two adult children.

“I have a daughter, and I didn’t want her to be sitting in the chair I was sitting in. I wanted to know and be at peace with that,” she said.

The genetic testing revealed she lacks a gene for another type of breast cancer commonly associated with triple negative breast cancer, but she has a variant of uncertain clinical significance for a gene for colon cancer. She shared the news with her children immediately, and they adopted regular screenings.

Now Mrs. McKinney looks forward to the upcoming weddings of both her daughter and her son and hopes for grandchildren soon. She’s never been a nature person, but as a new chapter of life begins, she said she is pleasantly surprised how much she enjoys walks in a nature preserve near her home.