Parkland Hospital, shown here in the early 1900s, was established in 1894. From the beginning of Southwestern Medical College, Parkland has served as the school’s facility for clinical teaching.

The campus and students of Southwestern Medical College in the 1940s.

University of Texas Southwestern has grown considerably from its humble beginnings. Now there are approximately 2,500 faculty and the school is the largest medical school in the University of Texas system and the home of six Nobel Prize recipients.

UT Southwestern was the top institution globally in the Nature Index of healthcare institutions in the biomedical sciences category for publishing high quality scientific research, a testament to the impact of our research community.

In 1973, Roger N. Rosenberg,M.D., recruited from the University of California at San Diego, became the first Chair of an independent Department of Neurology.

Dr. Rosenberg, who trained at the Neurological Institute of New York and the National Institutes of Health, brought a brand of neurology that was strongly grounded in clinical practice while at the same time being intensely research-focused and scholarly, setting the tone for high standards of clinical care and scholarship within the department. 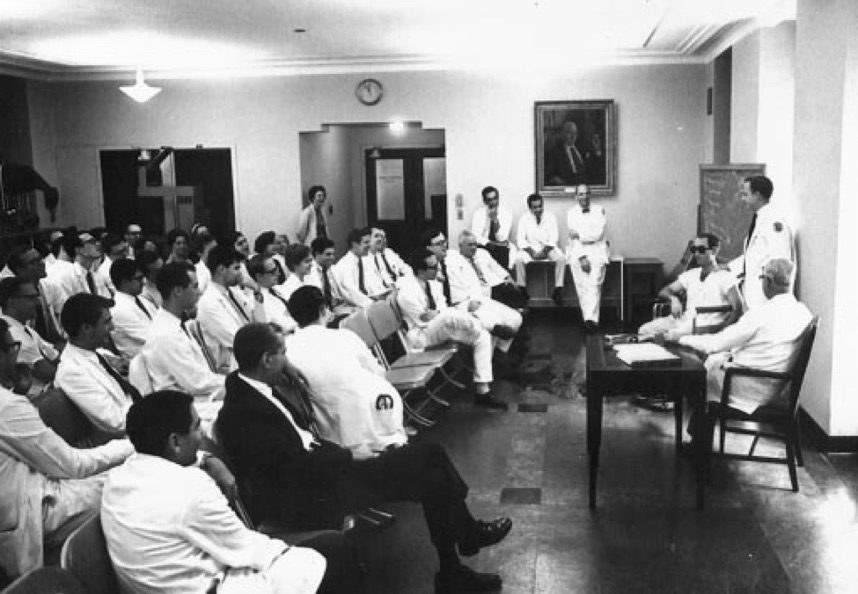 Dr. Rosenberg (seated under painting), as Chief Resident at the Neurological Institute of New York, 1968. 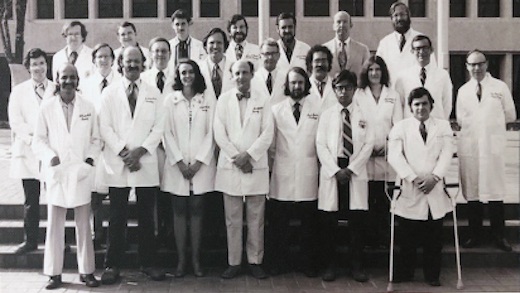 UTSW's Department of Neurology in 1974

Under Dr. Rosenberg's leadership, the Neurology Residency Program was approved by the American Board of Psychiatry and Neurology in 1974. The first class of four residents began training in July 1974, and the Adult Residency Program gradually increased to a total of 15 residents (five per year). Among the illustrious trainees during that period was Dr. Bruce Beutler (resident from 1981–1983) who was awarded the Nobel Prize in Physiology or Medicine in 2011. A residency program in pediatric neurology was also added and post-residency fellowship programs were initiated. In addition, a clerkship for junior and senior medical students was incorporated into the clinical services at the five hospitals. From a division of two, Dr. Rosenberg oversaw the growth of the department to 25 faculty members, encompassing all major neurological subspecialties.

In 2002, Steve Cannon, M.D., Ph.D., recruited from Harvard Medical School, was appointed the Chair of Neurology. While Chair, he continued to develop and expand the educational, research, and clinical goals of the department. The faculty increased to 35 full-time members, many of whom directed independent, externally-funded research laboratories. The department expanded to feature a world-renowned Multiple Sclerosis Center on north campus.

Steven Vernino, M.D., Ph.D., recruited from Mayo Clinic in 2004, and a long-time leader in the department, became Interim Chair in 2019, during which time the department underwent an important period of growth and development, particularly in the clinical and educational arenas, with the number of faculty exceeding 75, a number triple that during the Rosenberg era. 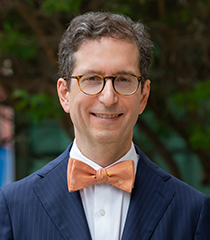 Elan Louis, M.D., M.S., recruited from Yale University, became the Chair in 2020, with the goal of carrying on the work of his predecessors and continuing expansion and growth of research, clinical, and educational efforts. Close ties with the emerging Peter O’Donnell Jr. Brain Institute at UTSW will facilitate joint resources to support a range of unique programs within the department and across the medical center.