The goals of the Division of Hematology and Oncology at UT Southwestern Medical Center are:

We integrate clinical excellence with the scientific strengths that make UT Southwestern known throughout the world.

Physicians in the Division of Hematology and Oncology provide excellent patient care in a variety of subspecialties, in addition to participating in clinical and basic research in order to provide the latest state-of-the-art care for our patients.

History of the Division of Hematology and Oncology

The Division was instituted by Donald C. Seldin, M.D., Chair of the Department of Medicine by the appointment of Eugene P. Frenkel, M.D., as the Director in 1962. The program began with a strong emphasis on hematologic diseases and the integration and direction of the laboratory of nuclear medicine at the Dallas Veterans Affairs Medical Center, which provided an opportunity for exploitation of radio isotopic techniques applied to aspects of iron and B12 biology and metabolism, cell maturation and marrow egress, and red cell distribution and survival.

Richard G. Sheehan, M.D., a disciple of William Damashek, M.D., was recruited to direct and develop the program at the VA Medical Center. The Division had multidisciplinary interactions from its onset with Tom Dutcher, M.D., Director of Hematopathology, Jack Pritchard, M.D., Chair of Obstetrics and Gynecology, and Frederick Bonte, M.D., Chair of Radiology/Radiation Therapy.

Areas of specialized focus were developed by the recruitment of R. Graham Smith, M.D., from the National Cancer Institute to direct hematologic malignancies, Mateel Graham, M.D., to direct the educational and clinical care programs, and Roger L. Bick, M.D., to generate a hemostasis and coagulation arena.

The first fellow in the Division was Merrick Reese, M.D., who subsequently originated Texas Oncology and then U.S. Oncology, the development of which generated a broad network of physicians in clinical practice in North Texas.

Several alumni of the division include Edward Neuwelt, M.D., Professor of Neurology at the University of Oregon Health Science Center who developed the models and methods of drug delivery across the blood brain barrier, Denise Yardley, M.D., a world class breast cancer expert presently at the Sarah Cannon Cancer Center in Nashville; Sanjay Awasthi, M.D., now at the City of Hope who has had extensive studies of drug transport and metabolism, Marvin J. Stone, M.D., who went on to direct the Sammons Cancer Center at the Baylor University Medical Center, John Cox, D.O., current Editor of ASCO’s Journal of Oncology Practice. Steve Paulson, M.D., current President of Texas Oncology and Barry Levinson, M.D., Director of Trinitas Cancer Center in New Jersey.

In 1991 John Minna, M.D., came to the University to develop the Cancer Center and in that role became the Director of the Division. Both roles were complicated by his development of the Lung Cancer Spore and the Nancy B. and Jake L. Hamon Center for Therapeutic Oncology Research. As a result, Eugene P. Frenkel, M.D., handled the Division again; and, Richard Gaynor took on the direction of the cancer center and subsequently then the Division leadership.

During this time subsectional focus developed in bone marrow transplantation which expanded to a program in Hematologic Malignancies. A second arena was that of Hemostasis and Coagulation. When Dr. Gaynor left to become Vice President for Oncology Research at Eli Lilly, Sandra Hoffman, M.D., Ph.D., became Division Director and James V. Willson, M.D., was recruited from Case-Western Reserve University as Cancer Center Director.

In 2007 Joan Schiller, M.D., a world class lung cancer clinician and investigator, was recruited to direct the Division with a direct and close clinical, research, and educational link with the Cancer Center. 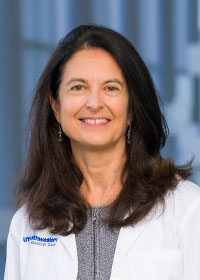 Connect with Hematology and Oncology