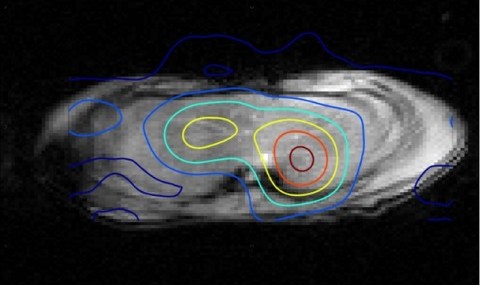 The Hyperpolarization Physics Lab focuses on developing new hardware and methods for producing hyperpolarized solutions suitable for molecular imaging experiments. The group has recently commissioned two new DNP based hyperpolarizers that function at a field strength of 4.6 Tesla. One system is now located proximal to a horizontal bore 4.7 T imaging system, while the other is located next to a vertical bore 14.1 T spectroscopy system equipped with a full range of probes ranging from 5 to 18 mm. This system is scheduled for upgrade to a new console as well as a 10 mm cryoprobe optimized for 13C spectroscopy of cell suspensions. The lab also contains an Oxford Instruments HyperSense prepolarizer, which was originally installed in 2007. The other imaging system available in the hyperpolarization lab is a 9.4 T/89 mm vertical bore system with gradients capable of producing 95 G/cm. It is equipped with a 25 mm probe capable of 13C imaging of the mouse as well as a series of standard liquid state probes.

In the Hyperpolarization Imaging Lab, a horizontal 4.7 T/40cm horizontal bore system and prepolarizer #3 are being utilized for development of in vivo imaging of hyperpolarized 13C. The 4.7T is set up as an imaging and spectroscopy system with actively shielded gradients and waveform generators on all RF and gradient channels capable of multinuclear in vivo investigations of small animals. This instrument was upgraded to the Direct Drive console with new Copley amplifiers in 2010.