fMRI and Neuroscience at 3 Tesla

The AIRC houses two 3 Tesla MR scanners dedicated for research in humans for potential clinical applications. The first 3T MR scanner (“MR A”) is equipped with 16 independent R.F. receiver channels (each channel 3MHz bandwidth) and a Quasar dual gradient system capable of an axis (x, y, and z) 80mT/m peak and 200mT/m/ms slew rate. The gradient system can be used to generate any type of gradient waveform at 100% duty cycle.

Special acoustic noise reduction is included in the system with a reduction rate of 30dB. The RF power amplifier is capable of generate a maximum power of 25kW. The image reconstruction computer is equipped with 4GB reconstruction memory and can reconstruct 1200 images per second. Patient bore diameter is 60cm (23.6 inch) and length is 60cm. The table can manage subjects weighing up to 250kg (550 lbs).

The newest 3 Tesla scanner (“MR B”) was installed in July 2011 and features a 32-channel head coil and a dual-transmission RF system.

Investigators at the AIRC are working on the development and application of novel MR technologies to understand how the brain works and how it changes with disease. Illustrated below are three examples of brain MR techniques.

Learn how to get started on a new 3T project.

Lying inside the MRI scanner, the participant performs a cognitive task while brain images are continuously taken. By applying computational analysis on the images, brain regions that were utilized during the task can be identified. The figure illustrates the brain regions "activated" when the person looks at a scene displayed on a computer screen. 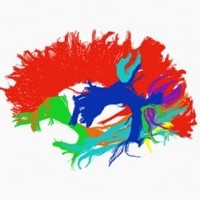 The MRI signal can be made sensitive to motion (diffusion) of water molecules. Because the pattern of water motion is dependent on the tissue orientation, this biophysical property can be utilized to identify anatomic organization of the brain. The figure on the left shows major white matter tracts that connect between various regions of the brain. 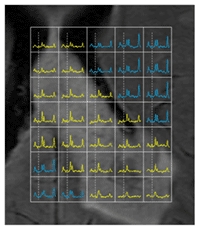 MRSI offers a tool to assess biochemical content of the human brain. The figure shows MRSI data overlaid on an anatomic image from a patient with a high grade brain tumor. The spectra displayed in yellow are located in the tumor regions, which exhibit abnormal spectral pattern with increased choline and decreased creatine and N-acetylaspartate.