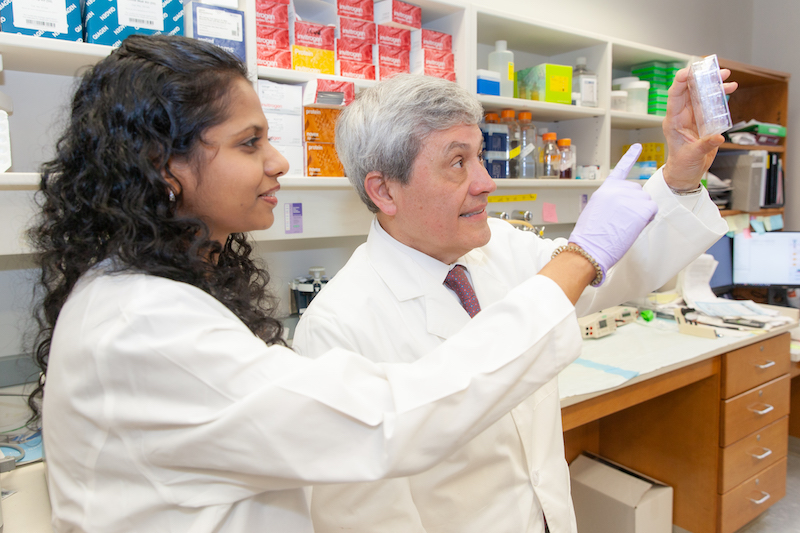 The findings, published today in the journal Cancer Cell, were prompted by the observation that, after an initial response, patients with cancers harboring HER2 mutations eventually develop resistance to a promising new cancer drug currently in clinical trials.

The scientists found that another drug, already on the market, counters that resistance and blocks the cancer, thereby providing the basis for a novel drug combination against cancers with mutations in the HER2 gene.

Dhivya Sudhan, Ph.D., a postdoctoral research fellow in the Harold C. Simmons Comprehensive Cancer Center, and collaborators evaluated data from a molecularly guided trial where patients with tumors with HER2 mutations were treated with the HER2 inhibitor neratinib. In this study, patients’ cancers were sequenced as the disease progressed during treatment. Based on this analysis, Sudhan discovered in the laboratory that an effective way to offset eventual resistance to neratinib is with everolimus, a TORC1 inhibitor commonly used to treat other types of breast cancer.

“This finding may give clinicians an effective response to neratinib resistance. That could make a real difference for patients with breast, ovarian, lung, and other cancers harboring HER2 mutations,” says Carlos L. Arteaga, M.D., Director of the Simmons Cancer Center at UT Southwestern and corresponding author of the study.

HER2 mutations have long been identified as a key driver in breast and other cancers. The authors of this study zeroed in on a signaling network driven by TORC1, which they showed is the pathway through which HER2-mutant cancers become neratinib-resistant.

“We consistently noted activation of TORC1 signaling as a mechanism of resistance to neratinib across different types of HER2-mutant cancers. Different cancer types used different strategies to escape neratinib, but they all converged on TORC1 signaling,” Sudhan says.

In addition to studying tumor sequencing data from HER2-mutant cancer patients across the country who are in clinical trials for neratinib, Sudhan also studied neratinib-resistant cells and tumors that continue to live and grow in the laboratory.

The sequencing of the patients’ cancer before and during the clinical trial showed that some patients already had a mutation that could activate the TORC1 pathway. Others would develop it eventually, but they could benefit from everolimus which is currently used as a TORC1 inhibitor to address the other roles TORC1 plays in cancer. Everolimus would allow the patient to continue benefiting from neratinib’s inhibition of HER2.

Sudhan says the combination of neratinib and everolimus worked in cell lines, organoids established from patient-derived tumors, and in mice harboring HER2 mutant tumors. The next step will be testing this two-drug combo in humans.