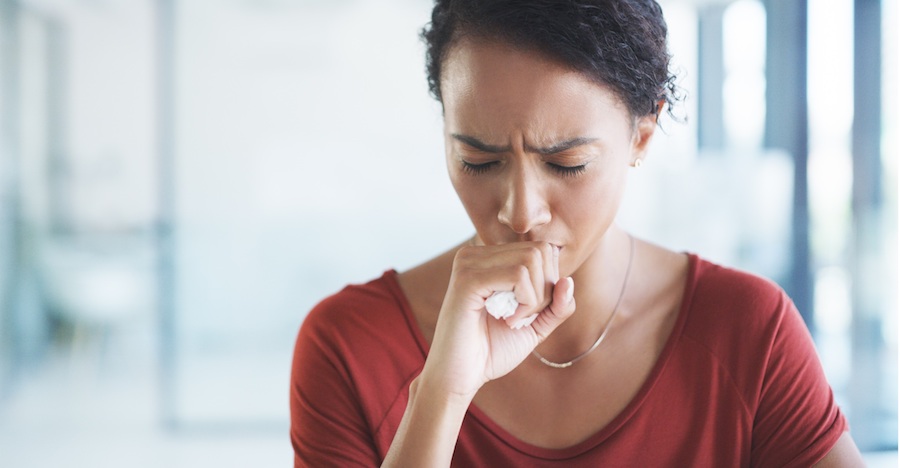 DALLAS – March 5, 2020 – The bacteria that cause the deadly lung disease tuberculosis appear to facilitate their own spread by producing a molecule that triggers cough, a new study led by UT Southwestern Medical Center researchers shows. The findings, published online today, in Cell, could lead to new ways to prevent the spread of tuberculosis, which is responsible for the death of more than 1.5 million people per year worldwide.

People have known since ancient times that coughing is a primary symptom of tuberculosis and that cough allows for the spread of disease from person to person. However, the cause of tuberculosis-related coughs has been unclear says study leader Michael Shiloh, M.D., Ph.D., an associate professor in UTSW’s Department of Internal Medicine’s Division of Infectious Disease and Department of Microbiology. The prevailing hypothesis has been that coughing is triggered by infection-induced lung irritation and inflammation, but this has never been definitively proved.

Shiloh and his colleagues had a different idea: They speculated that the bacterial agent that causes tuberculosis, Mycobacterium tuberculosis, itself might produce a substance that triggers nerves in the airway responsible for causing someone with the disease to cough, thereby allowing for propagation of disease.

To test this idea, the team relied on guinea pigs, a lab animal often used to study both tuberculosis and cough. Although guinea pigs have been used as an experimental model for tuberculosis infection for more than a century, it was not clear whether the disease causes these animals to cough. To answer this question, Shiloh and his colleagues placed guinea pigs infected with tuberculosis into special chambers that registered pressure and volume changes caused by coughing. Sure enough, tuberculosis-infected animals coughed significantly more than those that were tuberculosis-free.

To determine whether the bacteria produce a substance that can trigger coughing, the researchers isolated and tested various components from Mycobacterium tuberculosis, trying to determine if these components could do two things. First, could the components on their own make guinea pigs cough? And second, could the components make pain-sensing nerve cells grown in the lab – the type of cell responsible for stimulating coughing in the lungs – behave as if they were being triggered to induce a cough reflex?

After a series of experiments with components from Mycobacterium tuberculosis as well as from a large assortment of other mycobacterial species, Shiloh’s team ultimately identified the mycobacterial cell-surface fatty molecule known as sulfolipid-1 (SL-1) as the principal molecule that activates neurons grown in the lab. This response also occurred in human pain-sensing nerve cells, suggesting that SL-1 and its function has been conserved through evolution among different mammalian species. Importantly, when guinea pigs were exposed to purified SL-1, the animals indeed coughed. 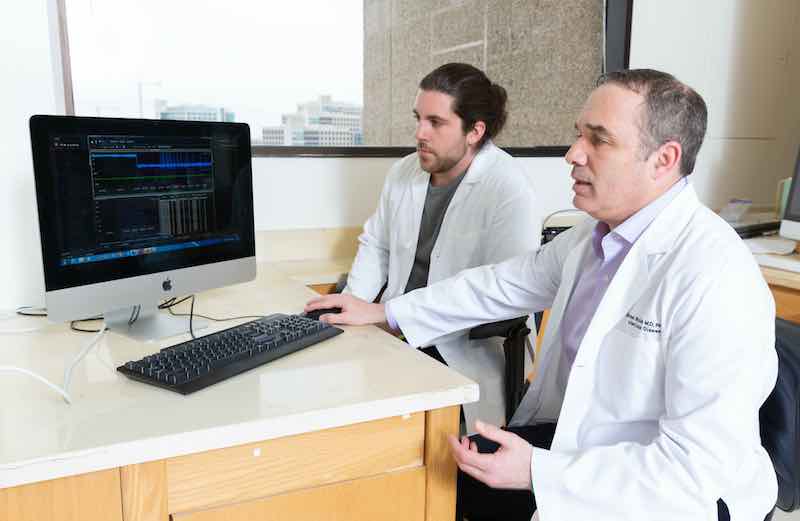 Graduate student Cody Ruhl, left, and Dr. Michael Shiloh assess data from a study that found bacteria that cause tuberculosis may facilitate their own spread by producing a molecule that triggers cough.

Together, Shiloh says, the findings suggest that tuberculosis-causing bacteria produce SL-1 primarily to stimulate a cough reflex in order to propagate the spread of mycobacteria from infected to uninfected people. Eventually, he says, if research shows that suppressing cough is not harmful to infected individuals, scientists may be able to develop a way to prevent transmission by either counteracting SL-1 or preventing its production.

“In many places where tuberculosis is endemic, people with active tuberculosis are frequently not admitted to the hospital, but simply sent home with antibiotics. People can cough for months and spread disease even when they are receiving appropriate treatment,” he says. “Someday, doctors may give antibiotics in conjunction with a medication that prevents coughing, which in turn could prevent spread.”

Conversely, he adds, this molecule could be harnessed to help patients cough in conditions where it’s beneficial, such as cystic fibrosis or for patients who require breathing tubes. Administering an aid that encourages coughing could help relieve the buildup of thick mucus in patients’ lungs.