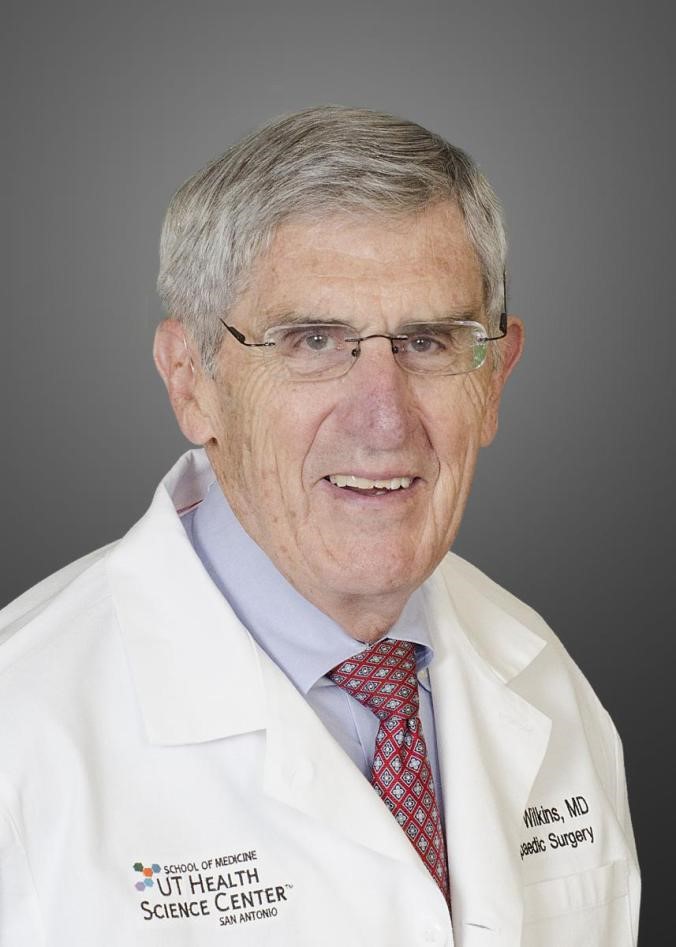 Dr. Kaye Wilkins graduated from Colorado State University in 1958 with an undergraduate degree and Doctor of Veterinary Medicine. After practicing both large and small animal veterinary medicine for four years, he entered Southwestern Medical School in 1962. During his graduation in 1966, Dr. Wilkins and future Noble Prize winner Dr. Joseph Goldstein shared the Ho Din Award, as the graduates who exemplified the unique personal qualities embodied in all great physicians – knowledge, understanding, and, most of all, compassion. Fifty-four years later, it seems that the trustees of the Southwestern Medical Foundation were prophetic. Following completion of his internship at Parkland Hospital in 1967, Dr. Wilkins served in the USAF in Iraklion (Crete), Greece until 1969. After completing his orthopaedic training at UT Southwestern in 1972, he did his fellowship at Hospital for Sick Children in Toronto, Canada. For the next 44 years he was a member of the faculty of the Department of Orthopaedics in the School of Medicine at the University of Texas Health Science Center at San Antonio. Dr. Tony Herring, another giant in orthopaedic surgery, stated that “Kaye was the life-blood of Santa Rosa Hospital in San Antonio and he became the world leader in the management of fractures in children. For so many decades Kaye was such a great leader in education, not only about fractures but also about many pediatric topics.”

In 1984 he became co-editor of Rockwood and Green’s “Fractures in Children”, the classic fracture text that became Rockwood and Wilkins Fractures in Children in 1994. To say that Dr. Wilkins educated the world would be an understatement as he has lectured in 58 countries on all the continents except Africa. As a member of the American Orthopaedic Association, he hosted 36 pediatric orthopaedic observers in San Antonio who travelled from 15 different countries. Dr. Grant Hogue (UTSW Residency Class of 2014) who was fortunate enough to become Dr. Wilkins’ partner, states, “Kaye was the guiding hand through the early years of my practice. He was quick to share his own complications and use them as a teaching tool. Kaye Wilkins could have the chief/chair at any children's hospital in the world. Beyond the accolades, wisdom, and great technical skill, Kaye is committed to the underserved children of the world to include South Texas where some of the world’s greatest health care inequalities and inequities exist.”

Dr. Kaye Wilkins is a true humanitarian, surgeon, and educator who has spent his life giving to others. His awards are too numerous to mention here, and if you are interested in a listing of his awards please click on the hyperlink. Dr. Herring goes on to say that one of Kaye’s favorite sayings regarding the education of surgeons in underdeveloped regions was to “leave skills, not scars.” Kaye Wilkins is a worldwide ambassador for all of orthopaedic surgery, and UT Southwestern Orthopaedic Surgery is indeed fortunate to have him as “our giant.”

Honorary Professorship - The University of Basrah College of Medicine, Iraq (2005)

Recognition Award “Faces of Medicine” - The “Any Baby Can”, ( A nonprofit organization that provides a safety net for families in need. This includes direction and guidance for families of children and youth with special needs is at the heart of this organization.) (2003)