Julie Mirpuri, M.D., Associate Professor of Pediatrics and a neonatologist, felt humbled to see a life-size neon orange replica of herself among the 120 statutes of diverse contemporary female STEMM innovators and role models at the #IfThenSheCan – The Exhibit in Washington, D.C., earlier this month. The exhibit kicked off a Women’s Futures Month festival for visitors to the Smithsonian Institution and will be on display through March 27 on the National Mall.

Even more meaningful, Dr. Mirpuri said, was meeting young visitors at the opening of the historic exhibit of 3D-printed statutes, where three UT Southwestern faculty members are featured.

“Seeing the sparkle in the eyes of the young girls I interacted with, the excitement in their voices, the ‘wow’ in their words and the belief in their eyes – that was priceless!” said Dr. Mirpuri. 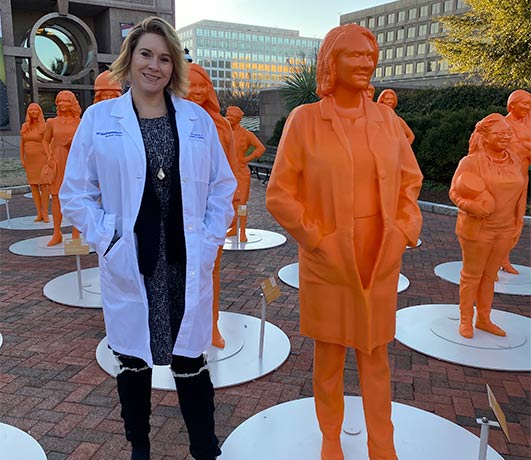 Danielle Robertson, O.D., Ph.D., another UTSW faculty member and IF/THEM Ambassador, stands beside her statue at the Smithsonian exhibit.

The IF/THEN Ambassadors Program celebrates the achievements of women scientists and medical professionals to inspire young girls to achieve their dreams and understand that women have important contributions, said Helen Yin, Ph.D., Associate Dean for the Office of Women’s Careers, Professor of Physiology, and a Distinguished Teaching Professor at UT Southwestern.

“We at UTSW are happy that we have so many IF/THEN Ambassadors and they are excellent ambassadors for science, technology, engineering, math, and medicine – and for UTSW,” Dr. Yin said.

Being part of the exhibit is such an honor, Dr. Sanford said.

“We know the COVID-19 pandemic has disproportionately affected women of all ages, including young girls across the world who have been kept home from school,” Dr. Sanford said. “As they hopefully are returning to receiving in-person, high-quality education, now more than ever, it’s so important for young girls to feel inspired and enabled to pursue their dreams.” 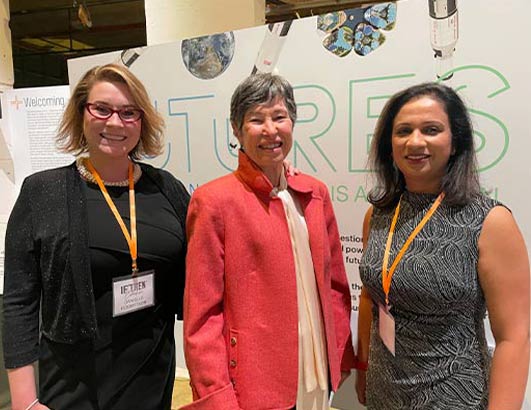 From left: Dr. Robertson, Dallas philanthropist Lyda Hill, and Dr. Mirpuri traveled to Washington to help launch the exhibit, which kicked off a Women’s Future Month festival at the Smithsonian. The IF/THEN Ambassadors is an initiative of Lyda Hill Philanthropies, founded by Miss Hill.

The display was inspired by a study that found very few statues in major American cities feature women in public spaces. The IF/THEN title comes from the phrase: “If we support a woman in STEM, THEN she can change the world.”

Lyda Hill Philanthropies, founded by Dallas-based philanthropist Lyda Hill, partnered with the American Association for the Advancement of Science (AAAS) on the initiative. Miss Hill is a longtime UTSW supporter who has donated generously to the Medical Center. Among her many donations was a gift that established the Lyda Hill Department of Bioinformatics in 2015.

As an Ambassador, Dr. Mirpuri said she especially enjoyed seeing so many young visitors at the opening event.

“As an IF/THEN Ambassador, it is a privilege to be able to engage young girls and be able to inspire them by helping them see that they belong in a STEMM career,” she said. “It is so important to be ‘seen’ in our careers, by many and not just by our professional colleagues.”

Dr. Robertson, an optometrist and research scientist who along with Dr. Mirpuri flew to Washington to take part in the event’s grand opening in early March, described the experience as “surreal.”

“To see my statue and knowing it would inspire and motivate the next generation of women in STEMM was exciting and humbling at the same time,” Dr. Robertson said. “Getting to teach kids about vision science at the Smithsonian was a once-in-a-lifetime experience.”

Dr. Sanford is a Dedman Family Scholar in Clinical Care.

Dr. Yin holds the Margaret Yin Chair for the Advancement of Women Faculty and the Peter and Jean D. Dehlinger Professorship in Biomedical Science. 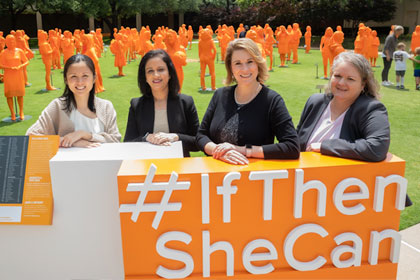 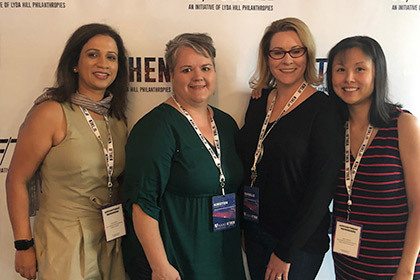