In early spring of 2021, when Rui Chen spotted eggs in petri dishes where she had treated virgin female schistosome flatworms with a compound she had just discovered in males, she thought she had made some sort of mistake – maybe she had accidentally dropped a few eggs into the dishes as well, since female schistosomes do not sexually mature or lay eggs except when clasped by males.

James Collins, Ph.D., who heads the UT Southwestern lab where Ms. Chen is a researcher and Ph.D. student, knew better. “You wouldn’t make a silly mistake like that; I think you’re on to something,” he told her.

So she repeated her experiment three more times, watching for egg production in the virgin worms after treating them with the synthetic compound her collaborators had helped her create in the lab after seeing it produced by males. “I saw the egg production again and again,” she said. Her findings were published this year in Cell, reporting the lab’s discovery of a pheromone, or excreted chemical, made by male schistosome worms that stimulates sexual maturation and egg-laying in females.

For her research, Ms. Chen received the 2022 Nominata Award, the highest honor for academic and research accomplishment bestowed by UT Southwestern’s Graduate School of Biomedical Sciences. 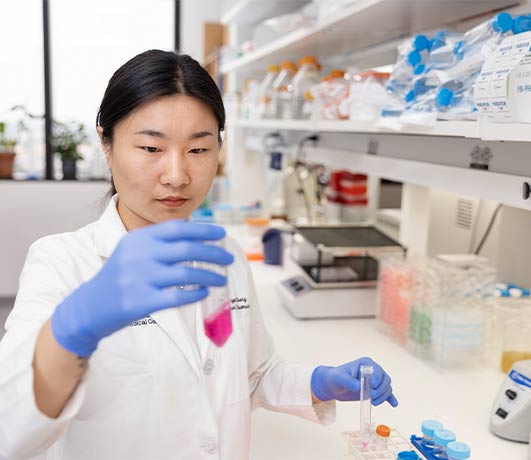 Ms. Chen works in the lab of James Collins, Ph.D., studying the reproduction of flatworms called schistosomes that cause a parasitic disease resulting in up to 200,000 deaths a year.

Ms. Chen’s hope is that these findings will one day lead to treatments that can prevent female schistosomes from laying the massive numbers of eggs that clog internal organs of those infected by the parasites. The parasitic disease schistosomiasis affects more than 200 million people in developing countries and leads to up to 200,000 deaths each year, according to the World Health Organization.

“Rui is not only a gifted experimentalist, but also a scholar with an uncanny sense of what the next experiment needs to be,” said Dr. Collins, Associate Professor of Pharmacology. “In the course of a single Ph.D., Rui has solved a problem I assumed I would struggle with my entire career.”

Ms. Chen was one of 10 nominees for the Nominata, established in 1980 by the Graduate Student Organization to promote academic excellence and research achievement at UT Southwestern. The winner receives a monetary award and presents their research to the UT Southwestern community, which Ms. Chen did on May 11.

Ms. Chen was born and reared in Wuhan, China, one of the countries in Asia and sub-Saharan Africa with a history of the chronic and sometimes fatal disease caused by schistosomes. She had heard of the parasitic disease growing up, she said, but it had become less of a problem by then due to the country’s efforts to eradicate it.

She earned a Bachelor of Science in basic biology from Wuhan University and completed an eight-month laboratory internship at UT Southwestern during her senior year of college before deciding to seek a Ph.D. in cell and molecular biology here. Ms. Chen expects to complete her Ph.D. this year.

She was drawn to Dr. Collins’ research into the biology of schistosomes because learning more about their sexual processes could help in the development of treatments for a disease that leads to disability and death in so many of the world’s poorest inhabitants – as well as because she was fascinated by the worm’s unusual reproductive process. They are the only type of flatworms that come in both male and female sexes rather than being hermaphrodites, and the male must hold the female next to him constantly within a long pouch on his body for her to become and remain sexually mature and lay eggs.

Schistosome infection occurs when people come into contact with the worm’s tiny, grain-of-sand-sized larvae in contaminated water. Once the larvae pass through the skin, they enter blood vessels, where they feed and grow over a few weeks into half-inch-long worms, Ms. Chen said.

But it is the females’ huge number of eggs – not the worms themselves – that creates the biggest problem, she said. “They lay eggs constantly after they reach sexual maturation,” Ms. Chen said. These masses of worm eggs get stuck in the organs of those infected such as the spleen and liver and lead to an immune response that can cause sickness. Abdominal pain and diarrhea are early symptoms, with enlargement of the liver and spleen in advanced cases, according to WHO.

Treatment involves killing the adult worms with the drug praziquantel, Ms. Chen said, but that doesn’t remove eggs stuck in organs and treatment must be repeated as more larvae reach adulthood or reinfection occurs.

Preventing the females from reaching sexual maturity and laying eggs – which they do only after pairing with a male – could provide a better solution, Ms. Chen said.

Understanding how schistosomes’ male-induced sexual maturity works could lead to drugs that prevent the release of BATT from the males or its effect on females, she said. Ms. Chen said another graduate student in the Collins lab is trying to locate the BATT receptor that takes up the chemical in females, while Ms. Chen tests BATT-like chemicals that might block BATT or the receptors for it.

Dr. Collins holds the Jane and Bud Smith Distinguished Chair in Medicine and is a Rita C. and William P. Clements, Jr. Scholar in Biomedical Research.

About School of Biomedical Sciences:

UT Southwestern Graduate School of Biomedical Sciences is committed to providing students with unprecedented opportunities to:

The goal of the Graduate School is to provide students with the tools, skills, and support necessary to forge a solid foundation upon which they can build successful careers as leaders in biomedical research and education. Alumni of UT Southwestern’s Graduate School of Biomedical Sciences maintain a legacy of excellence through their work at top research institutions throughout the world.